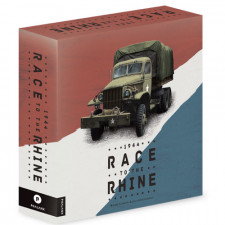 Youâ€™ve probably heard that old joke about what happens when Bernard Montgomery, Omar Bradley, and George Patton walk into a bar, spot a gorgeous woman at the back, and undertake a contest for her affections. No? Well, it goes something like this: Patton goes straight for her and starts bragging about the size of his detachment, Montgomery chats up the other ladies in the room in hopes of making the primary objective jealous, and Bradley sits around feeling inferior. Who gets the girl? Well, nobody does, at least not by Christmas.

The central peculiarity about 1944: Race to the Rhine is that it casts its players as three Allied generals trying to break through German lines during the final months of WW2, yet doesnâ€™t bother to align your interests. Here, the much-romanticized rivalry between these dynamic leaders is expanded to encompass far more than a book of wagers or some braggadocio. Instead, youâ€™ll directly influence German forces into obstructing the current winnerâ€™s path to the Rhine. Ahistorical? Absolutely. Silly good fun? That too. 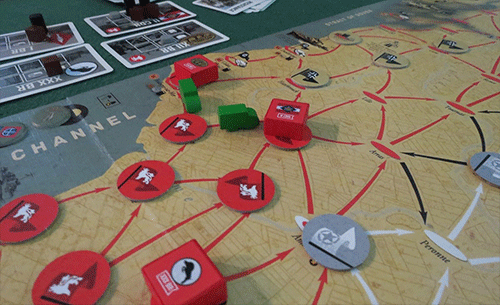 Meanwhile, the broad concept at the heart of this historical meandering is surprisingly clever. Rather than focus on the tactical side of the Allied push to the Rhine, your role hews more closely to that of quartermaster. This is a zoomed-out portrayal of war, one where your supply trucks are more the focus than the guys holding the rifles. Your army groups are effectively invincible, limited only by the resources youâ€™ve supplied them with. Depending on what they carry, they surge through enemy lines or fall back in ignominious retreat, all because you didnâ€™t give them enough ammunition to deal with their foes. If they become grounded, itâ€™s because you didnâ€™t dispatch enough fuel, or because their men are starving in the absence of any food rations, or just because you didnâ€™t have enough trucks to get their supplies to them in time. Itâ€™s even possible that you failed to supply them because of something as pathetic as a traffic jam.

In a way, Race to the Rhine resembles a Euro-style resource-mover, albeit one where a well-timed counterattack â€” spurred on by your frenemies â€” could sever your supply lines and leave a battle group floundering. It quickly becomes a game of risks, where men and supplies are wagered in exchange for the chance of forward momentum. The result is deliciously tense, especially since it can take a long time to get the right resources into the right places. Youâ€™ll need to requisition them, load everything onto trucks, and then drive across hundreds of miles until your supplies finally arrive at their proper destination. It behooves you to think as far in advance as you can: Do your men need more bullets on the off-chance theyâ€™ll run into enemy infantry? Or more fuel in case of an armored division? All the large caches of food were claimed by Monty â€” again â€” so youâ€™ll have to figure out how to get your troops fed before the next supply phase grinds all your momentum to a halt. But does that one group need to be fed at all, or are you totally fine if they donate their gas to a more deserving army?

Taken on their own, these questions of logistics are already difficult to answer, but the best part of the game is that ongoing competition to beat your allies to the river. If only you and your fellow generals would get along, you could cross through enemy territory without any trouble at all. Instead, Race to the Rhine encourages you to go for each otherâ€™s throats at every possible opportunity.

Not that youâ€™ll be able to directly assault one another, of course. That would be one historical heresy too far. Instead, after your regular turn, youâ€™re allowed to influence where the German defenses or counterattacks will be mounted. Naturally, this nearly always means youâ€™ll be piling them in front of your friendsâ€™ advancing lines, either prodding at weak points or building up your shared enemyâ€™s strength as you drive on DÃ¼sseldorf. Eventually youâ€™ll graduate from the starting encounter deck to something sterner, in the process bidding adieu to starving civilians, looted supply caches, and wimps like the 84th Infantry, and instead running headlong into the army-mulching 3rd Panzer/Grenadier Division. Good luck, boys.

Since this self-aggrandizing tomfoolery makes it unlikely that anyone will win by actually crossing the Rhine, itâ€™s also possible to win by being awarded the most medals, doled out for killing enemies, claiming towns, or occasionally being kindhearted. Where logistical savvy fails, maybe feeding some of those starving civilians will earn you some points. Then again, you might be able to cash in on your newfound clout by spending medals for airborne drops, perhaps giving you just the right punch to win outright.

Weather permitting, of course. After all, this is one of those rare games where traffic congestion and some bad weather can genuinely ruin your armyâ€™s chances of pushing through enemy lines.

There are a whole bunch of other things that make 1944: Race to the Rhine such a special experience. For instance, depending on which of the three generals you choose, Race to the Rhine plays differently. Patton is all about driving forward (of course), while Bradley tries to capitalize on his combined arms and initially superior logistics, and Montgomery tries to take all those coastal ports to supply him mid-advance. Theyâ€™re all still reliant on those tenuous supply lines to keep their engines, gun-barrels, and bellies warm, but their individual uses of their resources are often divergent.

Like K-ration cervelat sausage mingling with malted milk tablets in lukewarm water, Race to the Rhine also hits that sweet spot between complexity and simplicity, between a compact set of options for each turn and the far-ranging consequences of everything you do. When your armies stall, lose territory, and starve, thereâ€™s never any confusion about how you could have managed your situation a bit better. Sure, youâ€™ll want to capitalize on certain cities and towns that can bring in more supplies, but are you better off encircling the area and taking it all at once, or creeping forward and carefully protecting your lines? Thereâ€™s enough going on in 1944: Race to the Rhine that the decisions rarely come packed with a convenient answer.