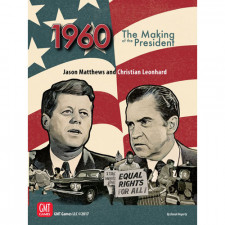 1960: The Making of the President Review

I imagine that I am not alone in my personal aversion to games about politics, especially in the tumultuous year of 2017. I play games to get away from electoral colleges, recounts, hanging chads, and the polarizing world of red vs. blue. I prefer the blood and sweat of hacking away at undead goblins to the stale coffee and packed tour buses of a presidential campaign any day. So it was then with some apprehension that I approached 1960: The Making of the President, a game covering the hotly disputed contest between John F. Kennedy and Richard M. Nixon.

Perhaps itâ€™s the sixty years since this particular election, or perhaps itâ€™s the noble attempt at approaching the issues of the 1960 contest in an objective fashion, but whatever the case, my fears were washed away within a few turns. The game will warp you back in time, giving you a clear picture of the culture and times of the late 1950s, while casting you in the shoes of one of the two major-party candidates. The event cards are both parts informative and highly evocative of the historical occurrences they depict. You can smell the love for the subject matter that was poured into the sturdy, nuclear fallout-proof GMT box. 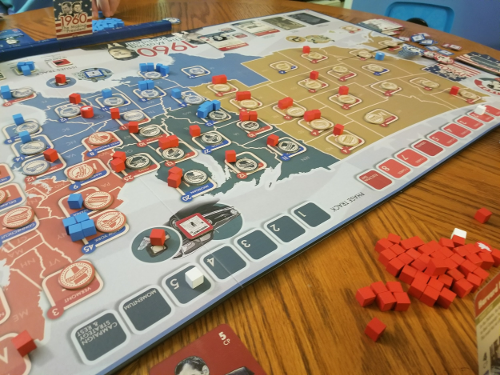 The game gets the usual superb GMT treatment. Itâ€™s a real sight to behold on the table.

Fans of Twilight Struggle will immediately recognize the system driving the design. Itâ€™s Twilight Struggle with some additional chrome tacked on, with a blind cube draw in place of rolling dice, and with a pleasantly shortened play time. Itâ€™s got all its predecessorsâ€™ little joys and agonies, like cleverly squirming your way out of a terrible hand or grimacing as you allow your opponent to trigger a devastating event that erodes all your support in a key area of the board. Every card play is beautifully tense.

Still, itâ€™s not quite as dreadfully cutthroat as Twilight Struggle. This may be because the fate of the world doesnâ€™t hang in the balance here. You wonâ€™t be worried that your very next card draw will degrade the DEFCON rating just far enough to plunge the world into a deadly nuclear showdown. And you donâ€™t necessarily have to memorize the deck to play well as in the previous game. This makes it highly accessible, as youâ€™ll feel a little more free to try different strategies and go for desperate gambits, since a bad card play wonâ€™t necessarily mean you might as well pack up the game.

However, the gameâ€™s sense of presence is ever so slightly improved over its forebear. Since you actually have to move your candidateâ€™s marker around the board in order to campaign and place valuable influence cubes across the board, youâ€™re treated with a front-seat narrative to the seemingly endless stump speeches and prolonged bus tours of a U.S. presidential election. If the card play feels looser than in Twilight Struggle, it also feels more visceral and significant. In the previous game, youâ€™re constantly just reversing each otherâ€™s plays, trying to keep the world in balance until you can go for the jugular. In 1960, youâ€™re making advances with a successful campaign in the South while your opponent visits the volatile Midwest and tries to sway the captains of U.S. industry to support him. Plus, the setting of a presidential election is something to which we can relate to a little more closely than two large superpowers vying for control of the world via proxy battles (on second thoughtâ€¦ never mind.) 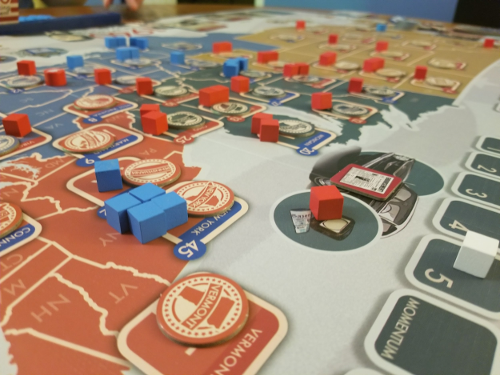 My opponent has brainwashed the people of New York.

Strangely, the gameâ€™s added chrome makes it feel paradoxically heavier than Twilight Struggle, since you have more subsystems to manage. Half the game is building up to the big televised debates that could sway several key swing states to your cause, and mechanisms like trying to win key newspaper endorsements and the hearts and minds of the people through advertising campaigns. The previous game contained all its chrome on the cards, with the possible exception of the Space Race, while this game gleefully tacks on all kinds of new bits and bobs to drive home the feel of a tight presidential race. Iâ€™m ambivalent on whether or not this is an improvement. Thereâ€™s more to think about on the front end, but then you wonâ€™t have to worry about gobs of cards with persistent effects you have to keep in mind being littered all over the board. Itâ€™s a trade-off, and it works, though I do wonder if it could have been cleaned up just a touch for a simpler experience.

After a play or two, though, the systems will become second nature and youâ€™ll find yourself enjoying one of the very best head-to-head territory control games on offer. It stands on the shoulders of its forebear, so itâ€™s not quite as impactful as that iconic game, but itâ€™s a wonderful experience nonetheless.

So, in the end, itâ€™s no Twilight Struggle, but nothing is. 1960: The Making of the President is a superb marriage of subject matter and design, and it comes highly recommended.