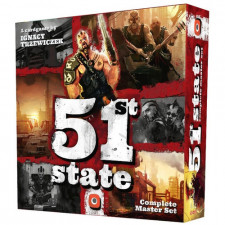 MB: I picked up the original 51st State a couple of years ago when I was in the midst of a Race for the Galaxy fascination. I generally like Ignacyâ€™s designs, but this card-based resource conversion game left me cold. It felt overly complicated and the rules were opaque. So it didnâ€™t last in my collection. Imperial Settlers, a redevelopment of 51st State, was a big improvement in terms of accessibility but it lost the post apocalypse setting in favor of illustrations that looked like a free-to-play mobile game.

So I was glad to see the new 51st State set, but after playing it a couple of times I think itâ€™s a good but not particularly great game. It has a lot of awesome artwork and some cool concepts, but it still feels somewhat kludgy and as it goes on, it seems to bog down into resource counter juggling. Grace, as someone that has been around with this design from the beginning, do you think that the new edition is a net improvement or are you retreating back to the old one?

GP: I played the original version of 51st State about five years ago. What I remember from that was some really intense iconography and general confusion. Although I was relatively new to gaming at the time, it doesnâ€™t seem like I was the only one that felt a little confused at what was going on. Now weâ€™re in 2016 and essentially the third iteration of 51st State, which overall seems to be a huge improvement over the first. At minimum, the game itself â€“ especially the concepts and icons â€“ seem to be improved. The game is easy to explain (even if you havenâ€™t played either the original version or Imperial Settlers), the icons all make sense, and the goal is clear: race to 25 points. I understand what youâ€™re saying about the resource counter juggling though. How do you think the fiddliness of the resource conversion in 51st State: Master Set differs from its predecessor Imperial Settlers? 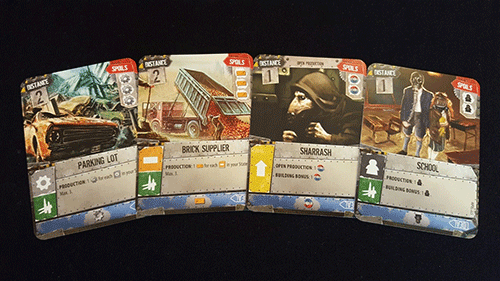 MB: Well, thereâ€™s just more of it â€“ more conversions, more currencies to collect and spend. I mean, there are three different types of contact tokens and each does something totally different in terms of what they can acquire. You are also looking at population, resources, wildcard ammo markers, defense tokensâ€¦and some things are not considered other things, but some are. Imperial Settlers sort of winnowed down the resources and there were fewer methods, so to speak, to make resources turn into other resources.

And thatâ€™s kind of the root of why Iâ€™m not over the moon about 51st State in its newest edition. Iâ€™m sure there are many who felt like Imperial Settlers was â€œdumbed downâ€ from the original concept, but Iâ€™m of the opinion that â€œdumbed downâ€ often actually means â€œsmarted upâ€ through refinement and reduction. And I felt like Imperial Settlers took the tableau-building and resource conversion of 51st State and made it more manageable.

But in all iterations, Iâ€™ve not been satisfied with how any of these games develop. Initially compelling setup turns evolve into a comfortably complex midgame and then an endgame where you are juggling so much card text, possible actions, conversions and tokens that it slows down dramatically.

GP: I agree that the game actually gets longer as it moves on. Also, the constant resource converting is not easy to overlook. Hands down, itâ€™s one of the biggest flaws in the game. I wonder if itâ€™s one of those things that gamers accepted back in the first iteration of 51st State in 2010, but is now too hard to ignore.

MB: That is a very good point, and if we look at the kinds of games that were really popular six years ago, resource conversion was all over the place. That whole Agricola thing â€“ make these cubes turn into those cubes, use this card to make a commodity turn into another one. But even back then I wasnâ€™t crazy about those kinds of mechanics, at least not when they become the primary process in a game. Imperial Settlers at least kept that all fairly light, it seems heavier in 51st State.

GP: Letâ€™s talk about some good things the game does though and how it differentiates itself from Imperial Settlers. Iâ€™ll start with the latter: as mentioned above, the game is a race to 25 points. This is the major difference in gameplay and overall feel as compared to Imperial Settlers. From the start of 51st State, I am scrambling to pick up a point whenever and wherever I can. Those seemingly measly few points quickly start compounding and just like a race, you are trying to edge out your opponents who are gaining on you and push forward toward the finish line. This somewhat frenzied feeling is absent in Imperial Settlers, which focuses much more on slowly building up an engine, letting it run, and then smoothly riding it into the fifth round. What else do you think 51st State has going for it?

MB: For one, I definitely prefer the 25 point target over the five round limit. Thereâ€™s more room to breathe, more room to develop, and more room to explore card interactions. For all of that slowdown at the end, I think you are correct that 51st State manages to create a stronger sense of late game urgency, which I prefer.

The setting is another advantage, I generally like the Neuroshima Hex concept and there is some great illustration and graphic design in 51st State, all of which I prefer to the â€œfreemium mobile gameâ€ style of Imperial Settlers.

And even though the resource management is somewhat overwrought, I like how specific it is. You need to make guns to attack other players. You need gas to make deals and set up convoys. Youâ€™ve got to have people go out and negotiate with fringe groups. That is all more interesting to me than â€œyou need an apple to make a dealâ€.

But I do miss the faction-specific buildings, I think that was one thing that Imperial Settlers did better â€“ differentiating the groups. 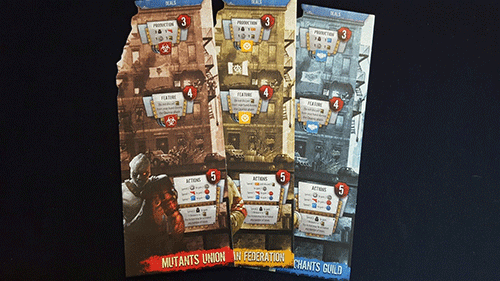 MB: I definitely prefer the Mad Max livery, and Iâ€™m also going to disagree with you â€“ I think that Imperial Settlers is the easier to play game despite the factional differences. Itâ€™s true that it requires a little more â€œcard knowledgeâ€ to play well, but I feel like the additional complexity of the unique decks and buildings buys a lot more â€œgameâ€ than the additional resources and currencies do in 51st State. 51st State feels just south of â€œtoo clutteredâ€.

GP: In the end, the games are siblings: there is a lot of resemblance between the two and itâ€™s obvious they come from the same family. The choice of which to get really comes down to theme/artwork and whether you prefer a more race-like game or a fixed five round game. I think both are solid games and I always enjoy playing them. I donâ€™t know if thereâ€™s a reason to have both in your collection, but being the fairly avid Portal fan that I am, I will be keeping both of my copies for now.

MB: I love Portal too, but this is one that Iâ€™ve enjoyed my time with but Iâ€™m passing both 51st State and Imperial Settlers on to the next players. Yet Race for the Galaxy is still on my shelf, despite it being more complex than either of these games.