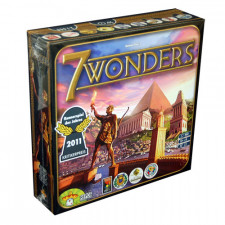 Many great innovations were born out of necessity. As the legend goes, game designer Antoine Bauza had a problem: he'd often end up with group of seven gamers and absolutely nothing decent to play. Most Eurogames cater to the four player sweet spot, and even if they support more, the downtime starts to outweigh the fun of the game. Party games, meanwhile, target even larger groups, often ten or more; and in any case, Bauza wanted a strategic, satisfying game and not a wacky social activity.

Unable to find the seven player Eurogame he wanted, Bauza made one. Riffing off that magic number seven, the theme came easily: the Seven Wonders of the Ancient World. Everything else about the game grew out of that theme and his two guiding principles: the game should support up to seven players without any noticeable downtime, and it needed to feel right across the entire listed range of player counts, from seven all the way down to...two? If he could pull that off, the result would have to be a cornerstone of every collection, a versatile game suited to nearly every situation.

7 Wonders is that game.

How does Bauza provide the same quality experience across such a wide range of player counts? The answer lies in two key mechanics. The first is card drafting. During each of the game's three Ages, each player draws a hand of seven cards. Simultaneously, everybody looks through their hand, chooses a card to play, and passes the other six to the next player down the line. Then, everybody reveals their chosen card and addsit to their tableau, the clever card design allowing you to stack similar cards in vertical splays to preserve space. Next, the players pick up the six cards they got handed by their neighbor, choose a card to play from that set, and pass the other five, repeating this process until they've each played six cards. The last one gets discarded.

This core mechanic ensures that, regardless of how many seats are filled, the game never bogs down. You're never waiting for your turn to come around, since you've always got a set of cards to choose from. At the same time, this isn't multiplayer solitaire. You'll want to pay careful attention to the card you choose, weight not just your own benefit, but how the cards you're handing your opponent might benefit them, as well as the likelihood that the other card you want might make it back to you as the dwindling hands of cards circle the table.

The other key mechanic that allows the game to scale so smoothly involves the functions of these cards you're passing to and fro. They come in seven color-coded flavors: brown or grey cards provide resources, blue cards are straight-up points, green cards form a set collection minigame that can pay off big if your opponents let you get the cards you want, red cards determine military strength, purple cards (only in Age III) provide end-game scoring opportunities, and gold cards do...whatever didn't fit in any of the above categories. Except blue and green, each of these card types concerns your immediate neighbors, the people seated directly to your right and left.

For example, military lets you gain or lose points at the end of each Age. But the game doesn't care about your exact military strength; scoring depends entirely on how you stack up against your neighbors. Purple cards give you points for how those same neighbors have built their tableaux, so if you screwed up and gave the player to your right a bunch of green cards, you can make up some of the deficit by playing Philosophers Guild. Resources start to become important in Age II, when most cards have a resource cost; if your city doesn't produce the right goods, you can pay your neighbors some coins to use theirs. Don't have enough? Gold cards can reduce the cost. Your entire focus for the game should be on those two people to your right or left, no matter how many other players are seated around the table. You're still competing against Bob four seats down, but you can't really affect him directly; you just have to trust that his neighbors know what they're doing.

Unfortunately, the smooth-scaling feeling breaks down in the two player game, which requires a radical, love-it-or-hate-it variant to work. It's basically a three player game with the third city mutually controlled by both players on alternating turns. When you pass your hands of cards back and forth, the Free City card moves with them, and the player holding this card gets draw and play an extra card that turn: one for you, and one for the Free City. The rulebook calls this an "Expert" variant, and it really does dial up the game's strategic potential. Since the Free City doesn't play to win, you can fill it up with any cards it can affordâ€”usually, the ones you don't want your opponent to have, or resources you'd rather buy from the dummy than from the other player. It's an intense game of doublethink and creative undermining, but it doesn't accurately represent the breeziness of the multiplayer.

It's a utility pizza game: the delivery down the street is probably not your favorite pizzeria, but you've got them on speed-dial anyway because itâ€™s plenty good enough to serve to any crowd. This is a smart, clean civ game with heavy player interaction but no in-your-face direct attacking, clocking in at somewhere near 30 minutes. Even if it's not something you pull out with regularity, you'll want to keep the game around for those surprising (and potentially awkward) occasions when six strangers turn up on your doorstep ready to do some tabletoppinâ€™.