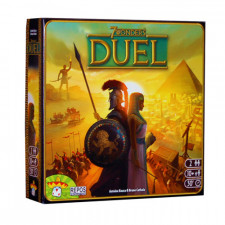 Two player games are sometimes zero sum â€“ hurting your opponent by two points is just as good as helping yourself by two. This makes a denial strategy far more viable in most two player contests. And denial strategies are on prominent display in 7 Wonders: Duel.

But wait, I hear you clamoring through the interwebs. Isnâ€™t 7 Wonders a drafting game? Doesnâ€™t it already have a variant for two? Well, yes to both questions. Nevertheless, Duel provides a specifically tailored two player experience that, while familiar to the original, vastly outperforms it. It implements drafting better, provides stronger denial, and includes tricky immediate victory conditions keeping players focused on their opponent.

At the beginning of the game, players draft four wonders each. Each wonder is expensive to build, but when built provides end game points, some immediate benefit or both. They are all great and some youâ€™ll want to build early to get the best use of ongoing powers. Others have one-time effects including letting you take two turns in a row, which can be critical in a drafting game. But, the name of the game is 7 Wonders, not eight. So when the seventh wonder is built, the eighth is discarded from play. The desire to time your wonders for greatest impact is nicely balanced by the race to get them built before your opponent stymies you.

Like the original, Duel is played over three ages. But instead of drafting a hand of cards back and forth, all of the cards are laid out in a pyramid shape, with some face down. The first player simply takes any card that is fully exposed. And, by taking such a card, that might reveal one above it. Now that newly exposed card is available to the next player.

And there are subtle layers to the strategy in the draft. More than merely grabbing something an opponent wants, you have to weigh the cost of providing more options to an opponent. Sometimes, the best card to grab is the one that wonâ€™t expose anything new for the other player. Even if there was a potentially better card, it might be more advantageous to box an opponent in and limit their choices.

After three ages, whoever has the most points wins. But you might not make it through three ages. The players have a tug-of-war board between them. Every military card moves the marker toward your opponent. If it gets all the way to the end, then they lose immediately. So as the marker approaches me, I need to get more military down to push the marker back and stave off the final attack. This means, military can also be a good way to force your opponent to take actions that prevent you from winning, but that donâ€™t necessarily synergize well with their plans.

Military isnâ€™t the only way to win outright. There are six science symbols in the game and each is represented on two cards. If you get all six symbols in your tableau, you immediately win. And, if you double up on a symbol, you gain one of five available progress tokens which tend to give you bonus points or special in-game abilities. Managing science â€“ and preventing your opponent from making use of it â€“ is critical.

The push and pull of the game isnâ€™t limited to just military or science. Even basic building resources become hotly contested. You can buy any resource from the bank, but it costs two coins plus one for every resource of that type produced by your opponent. So, by taking the glass production building, Iâ€™m not just denying it to my opponent, but Iâ€™m actually ensuring that all future glass purchases for them are increased. Economic warfare is serious business.

Essentially, everything you play in Duel has an impact on your opponent. More than just taking the card from them, you end up also costing them more resources, pushing them on military, or getting closer to scientific supremacy. There are also blue civilian buildings that bestow points. And if no one is getting an immediate victory (and those tend to be uncommon), those points will be determinant.

Duel gives you much of the same feeling as the original. There is a modified draft, you certainly build your civilization, and it has a remarkably quick play time. But, as a two player game, it keenly focuses you on your opponent. Ensuring that they are denied strong cards is just as essential as grabbing those best for you. The result is a tight game where every decision matters. Clever manipulation of the card row, and the use of double turns when appropriate, can be game changers. It keeps you invested the entire time as you constantly evaluate both your opponentâ€™s and your own position. Highly interactive with fabulously contested gameplay, Duel has quickly risen to become one of my favorite two-player-only titles.