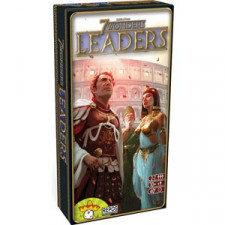 The Leaders expansion for the hit drafting card game 7 Wonders is a rare breed. It adds an element of strategy to the base game without unduly bloating the experience or creating complexity for complexityâ€™s sake. Few expansions manage to enhance the base experience; instead they tend to merely tack on more stuff. And more doesnâ€™t always mean better.

So how does Leaders achieve this remarkable feat? Well, by adding the eponymous Leaders to 7 Wonders. The expansion comes with one new wonder board (Rome) as well as 36 leader cards. Each leader provides a special power or ability when it is played. Some provide in game points, others end game points; some single use benefits and others ongoing powers.

At the beginning of the game, each player is dealt four leader cards at random. As with the standard 7 Wonders gameplay, you pick one and pass the rest. The draft continues until players get their set of four. Then, before each Age, players have the opportunity to play one of their leaders. They can be discarded for three coins or put under a wonder (for the usual cost). But most often they are played to the tableau where they will activate their special power. All leaders cost coins to play.

The nice thing about Leaders is that, on paper, it adds so little to the game. There is no substantial increase in play time since 7 Wonders is lengthened by only a single draft round and one played card to each age. About a ten minute increase in play time total. The bloat is minimal and you still get that same light feel from the base game.

But strategically, it is a superb addition. Often, during the first few rounds of 7 Wonders the players are a little at sea. Your Wonder might guide you a bit, but you basically just start drafting cards in the hope that something comes together. Only by the time Age II begins have you begun to build something that might be termed a strategy.

Leaders change this. You have four cards and you know (or hope) that at least three of them will make it into the game to enhance how you play. Maybe you take the leader that gives bonus points for science. So, right off the bat, you start drafting science and refined goods. Maybe your leader gives extra points for military. Suddenly adding another red card to your tableau makes more sense. Or maybe you get the guy that lets you build guilds for free. In that case, you want to hurry up and complete most of your wonder or other strategies as early as possible so that you can take maximum advantage of his power in Age III.

In other words, Leaders provides a little direction for your 7 Wonders game. Itâ€™s a great way to shine a spotlight on certain aspects of the game and give you more focused opportunities. It also tends to disperse the science acquisition a bit. Science often gets spread around in the base game resulting in lackluster points. But with this expansion, the players with science leaders tend to go big and the others eschew it for other strategies (while still looking for opportunities to tuck science cards under their wonder). As a result, scores tend to be higher for all players and the choice of whether to take a card to keep it from your opponent, versus another card that might help you more, becomes trickier and more engaging.

Most of the leaders are roughly equivalent in power. While they do wildly different things, they can bring about the same level of benefit to a player that builds a strategy around them. Now, thatâ€™s not to say that some leaders arenâ€™t more situationally useful while others have universal application. Thatâ€™s certainly true. But thatâ€™s also why the draft is a key part of the experience. Drafting the leaders, as you do with other cards, is a great way to ensure that players receive maximum choice from the initial randomly dealt leaders.

The one negative that carrys on from the base game is the iconography. Many of the cards have almost indecipherable symbols that supposedly display what they do. Partly, thatâ€™s because it uses the same unintuitive system from the base game, but also partly because the leaders have abilities that cannot be expressed with base game iconography. Like the leader that bounces the defeat tokens back to the players who defeated you. Great ability, confusing iconography. But that minor complaint is addressed by reviewing the rulebook and it should become less of an issue as players gain familiarity.

Leaders is a solid expansion. It adds to all of the base gameâ€™s strengths, fixes what is potentially the biggest negative of the base game (the lack of direction at the beginning), and doesnâ€™t harm its good points â€“ small play time, large player count. This is a no-brainer expansion and, if youâ€™re a fan of the base game, should absolutely be one to acquire.