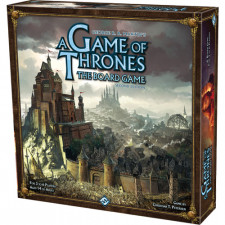 A Game of Thrones Boardgame Review

George R.R Martinâ€™s A Song of Ice and Fire series (or the HBO show Game of Thrones) is all about alliances, betrayal, backstabbing and the cruel climb to the Iron Throne. Game of Thrones (Second Edition) strives to recreate that same feel on your tabletop. It doesnâ€™t just trade on a known property hoping fans will foolishly buy it. Instead, this is a legitimate and substantive game that not only happens to be set in known and popular world, but very much evokes the themes of that world in the players.

In Game of Thrones, the players each take the role of one of the major houses of Westeros (Stark, Lannister, Greyjoy, Baratheon, Martel, and Tyrel). The goal is to gain the iron throne by controlling seven strongholds. But it is a task that cannot be completed alone.

Like many of the sinister and devious plots in the novels, Game of Thrones is all about diplomacy, brinksmanship and betrayal. Players are encouraged to make alliances with and against their competitors. Only with the help of other houses can any player hope to win. But the other houses are trying for victory as well, and there will be only one winner. So every alliance will break at some point.

What makes the game unique, and really gives punch to the betrayal, is that each round, the players select a number of order disks to place in regions where they control units. Order disks might command troops in that region to defend, consolidate power, or march on other territories. But the most critical, is the support token.

If I direct my troops in a region to Support, then they can lend their entire combat strength to any conflict occurring in an adjacent region. And can do so at absolutely no risk. No matter how the fight goes, my supporting troops are not hurt, do not get routed, and otherwise are just fine and dandy. Further, I can freely lend support to either side in the fight.

Now, if I have an alliance with someone, then perhaps I throw my support that way. I establish our friendship and hope that he will do the same for me on a future engagement. Or, perhaps I think my fellow is getting a little too close to the Iron Throne for my liking. And I suddenly switch my support at the last moment, changing the battle from an easy victory to a crushing defeat.

Or, perhaps even more cunningly, I let him know that Iâ€™ll be supporting him in the assault. But instead of playing a support token, I play a march order. Not only is he without my assistance in the battle, but now my troops can march in and attack whoever won. Suddenly, that castle he though he earned by combat falls to me, his (former) ally.

Even after the tokens are revealed, it often isnâ€™t obvious that betrayal will occur. Perhaps I play a march order intending to attack with my troops. Itâ€™s next to a mutual foe, but also adjacent to my ally. We take turns executing one order at a time. Sure, I say that Iâ€™ll march on our common enemy, but can he trust me not to turn around and march on him?

There are also wildling attacks, bidding for turn order, and other events that happen from turn to turn. Players canâ€™t focus entirely on military victory and hope to succeed. Instead, they must consolidate their power from time to time. In an abstract way, this represents the gathering of local forces, banner men, and allegiance of minor houses. At times, control of special advantages goes up for auction and they must be obtained by blind bid. But whatever you put forth, you lose â€“ even if you didnâ€™t win the prize. This leads to heart-wrenching decisions â€“ especially for those who failed to consolidate power and have precious few resources to bid.

For the more military minded, players must also balance their armies and supply. In Westeros, it can be somewhat difficult to recruit new units. And, even when recruited, your armies are strictly limited by your supply centers. More supply means larger armies. It is said that amateurs study tactics and generals study logistics. Players must act as generals.

The power and logistic elements are interesting additions and keep the game from being a series of board movements and attacks. But they are hardly the focus and ultimately tangential to the play experience. Instead, the real meat of the game is the ratcheting tension that comes with inevitable betrayal. Itâ€™s not a question of if, but when.

But this isnâ€™t a screw-your-neighbor game. The player that simply betrays every agreement immediately finds himself without friends â€“ and without a chance at victory. Instead, like Lord Balich, you must carefully cultivate relationships, keep the ones that help you, and betray the others when the moment is right.

Game of Thrones is on the long side, often taking in excess of three hours with a full compliment of players. But while it can make the game logistically challenging to get to the table, it also makes it that much more rewarding. The tension starts at a low simmer, but then slowly begins to boil. By game end, relationships youâ€™ve spent hours tending are ripe for harvest. Because of the spiteful nature built into the game, youâ€™re going to want to play this with more mature gamers who can handle those crushing changes.