Catan: Brotherhood of the Watch Review

As a big A Game of Thrones fan, I had very high hopes for GOT Catan. Despite initially getting into gaming by playing the original Catan, it is not a game that we nowadays reach to play very often. However, this new version of the original classic is one that I could see us incorporating into the regular rotation. There are new components to the game that add a certain level of cooperative play, and components that allow you to lose the game by being overthrown by the wildlings.

When you open the game you will notice two rulebooks. For someone that has never played Catan before this could be overwhelming. However, they do introduce new players to the original game play before they add in the addition of the GOT components. Therefore, if you have never played Catan before, this is not a bad game to start with if you are a GOT fan. A full original game can be played for learning purposes with the contents of this box.

One of the first things you will notice about this addition of Catan is the rather large wall dividing the game board. The actual game components are very well made; however, there is one big flaw. If you are sitting directly opposite the wall, you cannot see the numbers written on the game board on the other side. This prevents players from knowing what all is happening on the other side without (gasp!) standing up.

Initial setup of GOT Catan

The actual gameplay of GOT Catan is very similar to the original with the addition of a few new rules. You still build settlements, roads, etc. with the edition of building guards on the wall. Building a guard costs one wood, one brick, and one sheep. On their own these provide no additional victory points, but once you get three of them you get one point, and five guards gets you two victory points. These are helpful to prevent the wildlings from crossing the wall.

Wildlings get activated primarily when players build settlements or keeps (cities in original Catan), and then occasionally when someone takes the longest road / largest patrol card. The small cards under the settlement/keep on your player board determine the type of wildling activated. There are three types of wildlings with different abilities. The giants can kill a guard, the climbers can (you guessed it) climb the wall, and regular wildlings can join forces and overthrow the wall. In each case, having built guards on the walls helps prevent the wildlings from entering the Gift. Once they cross the wall, they act like a robber blocking the space from getting resources. If 8 spaces are filled by wildlings or three groups of wildlings breach the wall, you essentially lose the game and player with the most guards on the wall is the tragic victor. 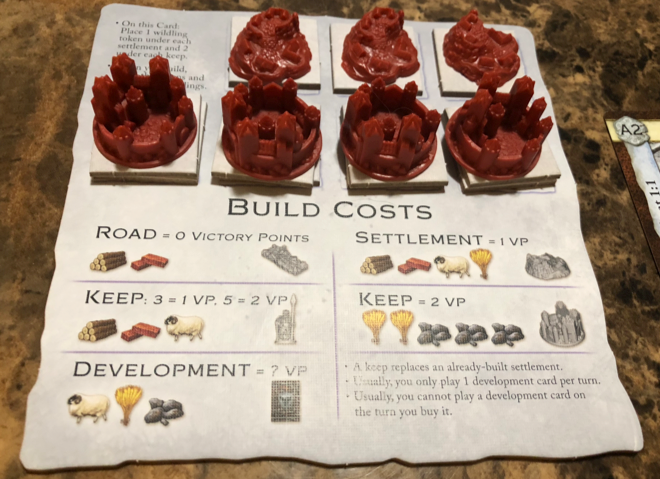 With the edition of the wildlings, it does force you to change your strategy up from the normal Catan. The high value spaces are near the wall so they get covered up first when the wall is overthrown. It is a high risk, high reward situation. All the normal pros/cons of Catan are still involved in this game. It is the luck of the roll to decide who gets what as far as resources. Despite being on the 8 with double resources you can somehow still never get those sheep that you need.

A new aspect to this game is the addition of the 12-sided die. This die determines which wildlings move towards the Gift. As shown below, when a wildling is activated, it enters one the three marked areas north of the wall. To advance a die roll is needed. A 1-3 moves the wildlings marked with the ladder, while 4-5 moves the ones with the huts, and a 6-8 moves the foot ones forward one space. Once at the wall, they arrive at a camp where they remain based on their features. Also on the board are arrows pointing from the wall to a tile south. This is where the wildlings go once they breach the wall. Therefore, if you have a settlement that is just south of the wall, you want to add more guards to protect your section of the wall. Otherwise, you may lose your resource generation. 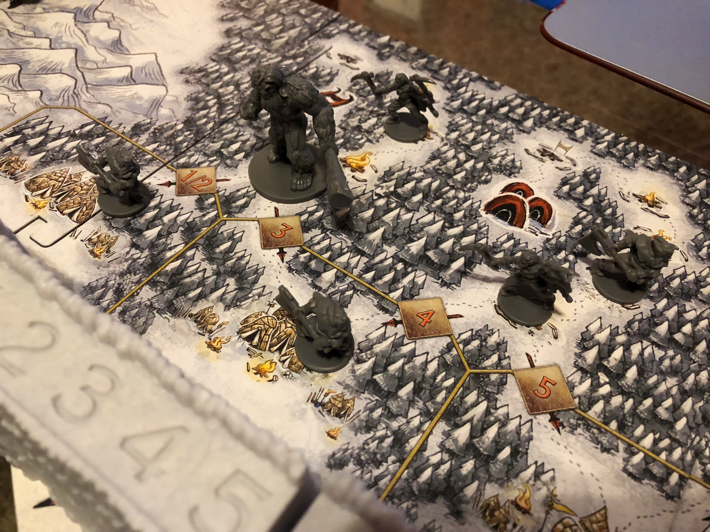 Wildlings advance towards the clearing just North of the wall

Perhaps my favorite part of the game is the addition of the character cards. There are people such as Samwell Tarly who allow you to take a resource of your choice if after resolving a production roll you receive none. Each card has different specials that come into play at different points of time throughout the game. One nice feature is that you can choose to use or not use them at any point of time, but that you will always have a character card. Once you use them, you can pick to flip the card over or pick an entirely new card. Therefore, you might as well use their features to help in your gameplay. 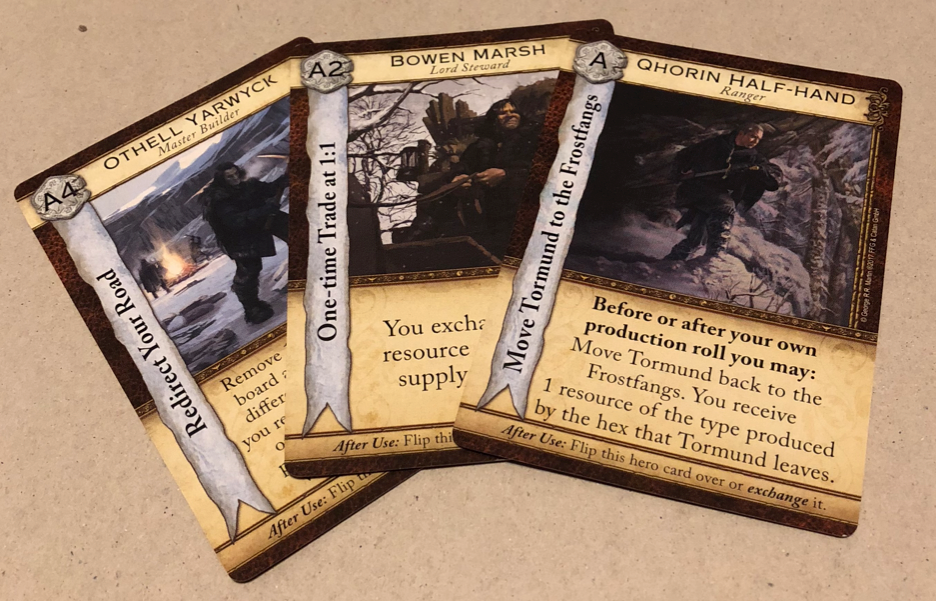 Three of the eleven character cards

Overall, for A Game of Thrones fan, I found this version of Catan to be a fun alternative to the original. Even if you do not follow GOT, this provides a good variety to the Catan rotation. However, one big downside is that despite the variety of players (Ygritte, Benjen Stark, Jeor Mormont, etc.) they did not include the beloved John Snow. Apparently, since he knows nothing, he was excluded.