KM: I donâ€™t know why designers keep trying to make Eurogames. The best one has already been designed, all the way back in 1962: Sid Sacksonâ€™s Acquire. It features tense decisions, brutal conflict, a short play time, and an incredibly minimalist rule set, with original editions featuring all the gameâ€™s rules printed on the inside of the small box lid. Itâ€™s a great example of how less is usually more.

MB: Exactly, Acquire is the ur-Eurogame and it has only been equaled by maybe Kniziaâ€™s best work in terms of expressing a complex theme with very few rules. I usually roll out the â€œoriginal Eurogameâ€ line when I introduce it to new players and I love watching them go from â€œthis is just like some kind of Bingo gameâ€ to watching their businesses grow, prosper, consume or be consumed. Thereâ€™s high drama, risk, longshot investments, ruthless capitalism, bouts of poverty...width and breadth of what this game offers with so little is astonishing. Everything about this game is just brilliant, and to my mind there has never been a better business game. 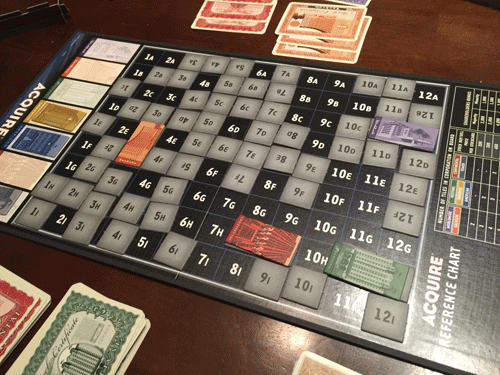 This game is WAY more exciting than it looks.

KM: One of the greatest elements of Acquire is how it forces you to balance cash flow against endgame points. You could be a lock for controlling the majority of shares on what appears to be the game sessionâ€™s biggest hotel chain, and yet, if you donâ€™t manage to get in on some lucrative buyouts early on, youâ€™ll sink your chances at edging out others for the win.

MB: I love this aspect of the game. Itâ€™s not just about building the biggest enterprise; itâ€™s also about generating revenue through short-term investments and speculating as to which chains will thrive and which will just be shark food for the larger competitors. The ebb and flow of commerce in Acquire can be brutal, but anyone who has played this game knows how freaking it great it feels when you start to break even and make money turn over turn. But getting to that point can be disheartening for new players who donâ€™t get that you might be in the poorhouse for half the game waiting for a turnaround or that your long-term pick might wind up being a complete dud.

KM: Some think the gameâ€™s high level of brutality is a flaw, but theyâ€™re wrongâ€”rather, thatâ€™s one of the gameâ€™s greatest features. While todayâ€™s games often coddle the players, with the one who can optimize a series of tiny decisions and currency exchanges coming out ever-so-slightly on top, you can actally sink your chances at winning in the first few turns in Sacksonâ€™s masochism machine. Now, any player with a head on his shoulders wonâ€™t make drastic mistakes like that, but Sackson lets you be in control and decide where to put your hard-earned cash each turn.

MB: I think this is an asset as well, and anyone that enjoys the sink-or-swim economics of Martin Wallace games will likely appreciate this factor as well. The decisions in this game are crucial- where and when to play a tile, when and when not to merge two businesses, whether or not to take a dividend or re-invest in an acquiring companyâ€™s stock, how much or how little to diversify your portfolio- lots of simple, immediate decisions with very concrete ramifications.

KM: Another awesome featureâ€”again, a super-simple design decision with far-reaching implicationsâ€”is that you must place your tile each turn before buying stock. I love this little stroke of brilliance. If you have the perfect tile to merge two hotel chains together, you canâ€™t just buy up three stocks to jump to the top of the heap, and then merge them. Nope, youâ€™ve got to buy your stocks and wait a whole round before you make your big move, giving others a chance to figure out what youâ€™re up to and respond in kind.

MB: And oh, the â€œdo they or donâ€™t theyâ€ tension of who has which tiles...waiting for the round to come back to you with that one linchpin spot up in the air. Itâ€™s delicious!

KM: This lends the game a nice social feel in spite of its strategic nature. In my playgroups, weâ€™re whining and moaning as we try to convince people our hotel chains arenâ€™t worth buying into, and that the other players really should buy into American rather than Imperial or what have you. This kind of table talk makes the game come alive, not that it really needs the help.

MB: Oh yeah, the groups I play Acquire with are like that as well- despite looking like something designed in Excel (decades before there was such a thing) and featuring what many would consider a â€œdryâ€ setting, we find that Acquire is an incredibly lively and social game. Part of that is because Mr. Sacksonâ€™s design is restrained enough that it casually steps out of the way of the socialization. Somehow, despite all the math involved, Acquire never turns into a number-crunching, beard-scratching stare down with the board. Iâ€™ve found that analysis paralysis is rarely an issue as well, primarily because everything is so up front and approachable. 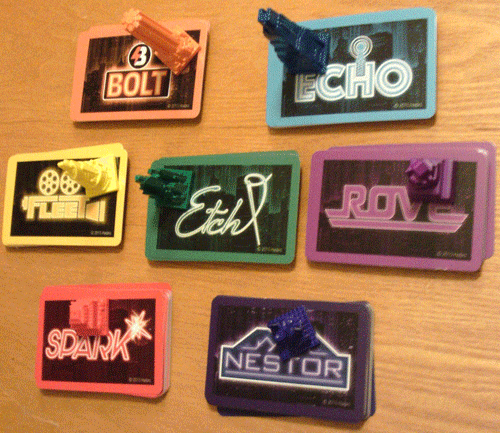 New shares cards and corporation markers, neither of which are as awesomely dated as those in previous editions.

KM: Iâ€™m curious, have you ever played Sacksonâ€™s Executive Decision? It is a hilariously barebones design; in fact, Iâ€™m informed Sackson turned the design in to 3M without any theme at all! In any case, youâ€™re business executives tasked with purchasing raw materials helpfully named â€œX-Fine, Fine, and Good,â€ and producing finished goods with rich names like â€œA, B, and C.â€ It sounds super-dry, but once you start playing, players are sucked into the exciting world of supply chain management, as the mechanisms are simply there to introduce a space for playersâ€™ plans to bounce off each other.

MB: I have and you are correct- that was one of Sackson's greatest abilities, to create engagement and investment without a bunch of overhead or excess contextualization. He had a terrific feel for expressing where both subtle and more complex conflicts exist in particular kinds of interactions

KM: I bring it up because thatâ€™s what Sacksonâ€™s very best designs do: they provide an arena for a cutthroat battle among the players. They donâ€™t need overwrought flavor text or elaborate art direction to achieve some of the most â€œthematicâ€ experiences Iâ€™ve ever had.

MB: Exactly- this is the difference between games that rely on "fluff" to create a sense of setting and those, like Acquire, that use mechanics, interaction and the organic creation of diegetic narrative to support THEMES. Not settings. THEMES. This is another point of favorable comparison with Knizia.

Stepping down from the Ivory Tower, I have not played the latest edition- Iâ€™m still very much in love with my 1999 Avalon Hill edition. Iâ€™ve seen some of the materials of the new edition and other than being completely offended that they stupidly have called it â€œSaxon Cityâ€ (instead of the more respectful Sackson City), it looks to be more or less the same game. Have you tried the new edition?

KM: I have not. I am still rocking my 3M copy from the â€˜60s, having never even upgraded to the nice 1999 version. But the nice thing about this game is that other than a few misguided reprints in the â€˜80s and â€˜90s, the gameplay has never changed, so any edition you pick up is going to have the same awesome game within, plus or minus a few production quirks. Iâ€™m just glad itâ€™s still in print at allâ€”itâ€™s a real testament to the strength and longevity of this excellent design.