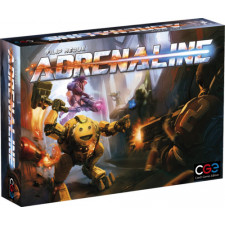 Letâ€™s face it; there are a lot of aggressive, kill-or-be-killed games. So Adrenaline isnâ€™t exactly breaking new ground in the thematic area. However, it absolutely brings unique mechanisms that turn a brutal game into something controlled, strategic, and undeniably enjoyable. If you like the idea of shooting your friends in the face, but hate the die-rolling combat systems, then keep reading. Adrenaline may have found the answer.

The board is made of two double-sided pieces that can combine to create different arenas. Three of the boardâ€™s rooms are spawn points. Thatâ€™s where weapons show up and the characters will materialize at game start (or after being blasted). Every other space has an ammo drop that will give the players different colored cubes.

On a turn, a player can pick two actions. Their options are to move, grab, or fire. Grab allows the player to pick up weapons or ammo. And fire lets them shoot their opponents. But it isnâ€™t just deducting hit points â€˜til someone dies. Itâ€™s a little more complicated than that. 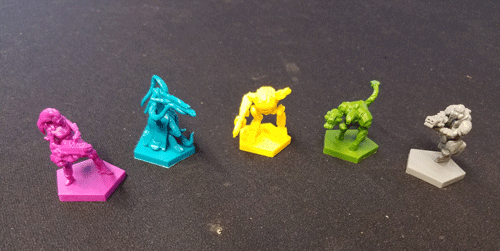 It ainâ€™t the Overwatch gang, but itâ€™ll do.

Any time you hit an opponent, you give them wounds in your color. When they die, they give out points. Whoever did the most total damage gets eight points. The next player six, then four, two, and one. The player who hit first gets a bonus point, and the one with the kill shot gets to go on a special killshot track that will be scored at game end. However, the dead player puts a marker over the â€œ8â€ space on their points. The next time they are killed, theyâ€™ll be worth six points for the one with the most damage, then four and so on.

The game lasts until there have been eight kills (though you can play to five for a shorter game and still have a great time) and then there is one final round and end-game scoring. Most points wins.

Everything about this game is tailored to make sure you have a shoot-em-up experience that incentivizes racking up kills while de-incentivizing ganging up on a player. The point system, for instance, is fantastic. An unwounded player is ripe for the picking since the first one to hit him is going to get that sweet bonus point. But players that have already been killed before are worth less points. So they might be attacked less as their opponents go after more lucrative targets.

The ammo and weapon system is also pretty fun. All weapons take some number of cubes with the better weapons generally needing more. So taking enough actions to keep your guns loaded is just as important as achieving line-of-sight and emptying your clip. In fact, it brings an interesting logistical element that is largely absent from the genre.

And the weapons are diverse and unique. You have things like blades and sledgehammers that require you to be in the same square but can be brutal and are easy to load. The railgun can shoot through walls while the homing missiles can hit targets out side of the line of sight. Because every weapon in the game is unique, it makes the players feel very different. You have to play to your weaponsâ€™ strengths while avoiding your opponents as best you can. 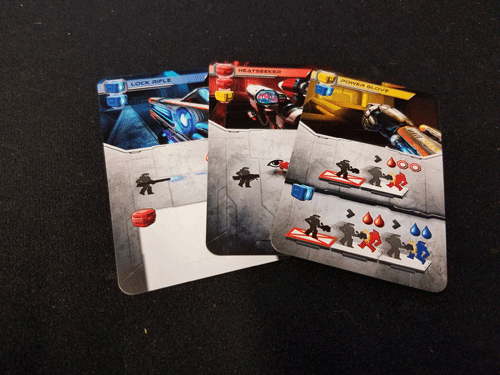 The Power Glove temporarily turns your character into Fred Savage.

Even when you start taking damage, the game accommodates by making you more effective. As wounds accumulate, you gain access to adrenaline actions that improve your base actions. In fact, after you die and get reset back to zero health, you sort of hope that someone will deal at least a few points of damage to you so that you can maneuver better. This is another great way to make players who have taken a beating stay in the game and enjoy themselves.

And when you die, itâ€™s an easy affair. You simply pop back up at one of the three spawn points, empty your board of wounds, and start dishing out damage once again. Itâ€™s an almost seamless re-entry into the game and keeps everything flowing. It would have been easy to say that a dead character must lose a weapon or discard their ammo. But instead, Adrenaline goes for maximum action and keeps the fun quotient high.

Mechanically, Adrenaline is a little like a pick-up-and-deliver game. Itâ€™s just that youâ€™re picking up ammo and delivering it in devastating blasts to your opponentsâ€™ bodies. Adrenaline does a good job of staying exciting while being easy to learn and play. And if you want something more advanced, it provides Domination and Turret modes where you have to control the spawn points and watch out as the arena fires back. If youâ€™re a Euro-lover looking to add in some action, then this title is the one for you.