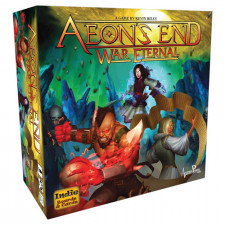 It took me a while to open my heart to Aeonâ€™s End, 2016â€™s â€œno-shufflingâ€ cooperative deckbuilding game. For one, that â€œno shufflingâ€ thing is only half true: while the playersâ€™ decks are never shuffled, the tiny six-card turn order deck sees near-constant shuffling. In my review shortly after the gameâ€™s drop, I said that â€œIt can feel more like a bag of sporadically successful tricks than a cohesive designâ€ and mentioned that the setting was sometimes more coherent than the mechanics. However, I praised the game for its varied and clever Nemesis design that pits players against Sentinels of the Multiverse style villains, each of which plays out almost like a different game.

Aeonâ€™s End: War Eternal, the gameâ€™s first standalone expansion, has given me the opportunity to reevaluate the original gameâ€™s finer qualities, and I find that Aeonâ€™s End has improved with age. The mechanics feel more tied togetherâ€”thanks in part, no doubt, to War Eternalâ€™s revised graphic designâ€”and the turn order deck justifies its own fiddliness in numerous ways.

War Eternal is more than a flattering reflection of the original, however. Itâ€™s got a full complement of eight breach mages, four nemeses, and all new gems, spells, relics, and basic nemesis cards. It also debuts the aforementioned visual overhaul, also seen in the base gameâ€™s second edition. And it expands the story of Gravehold, the last bastion of The World That Was. 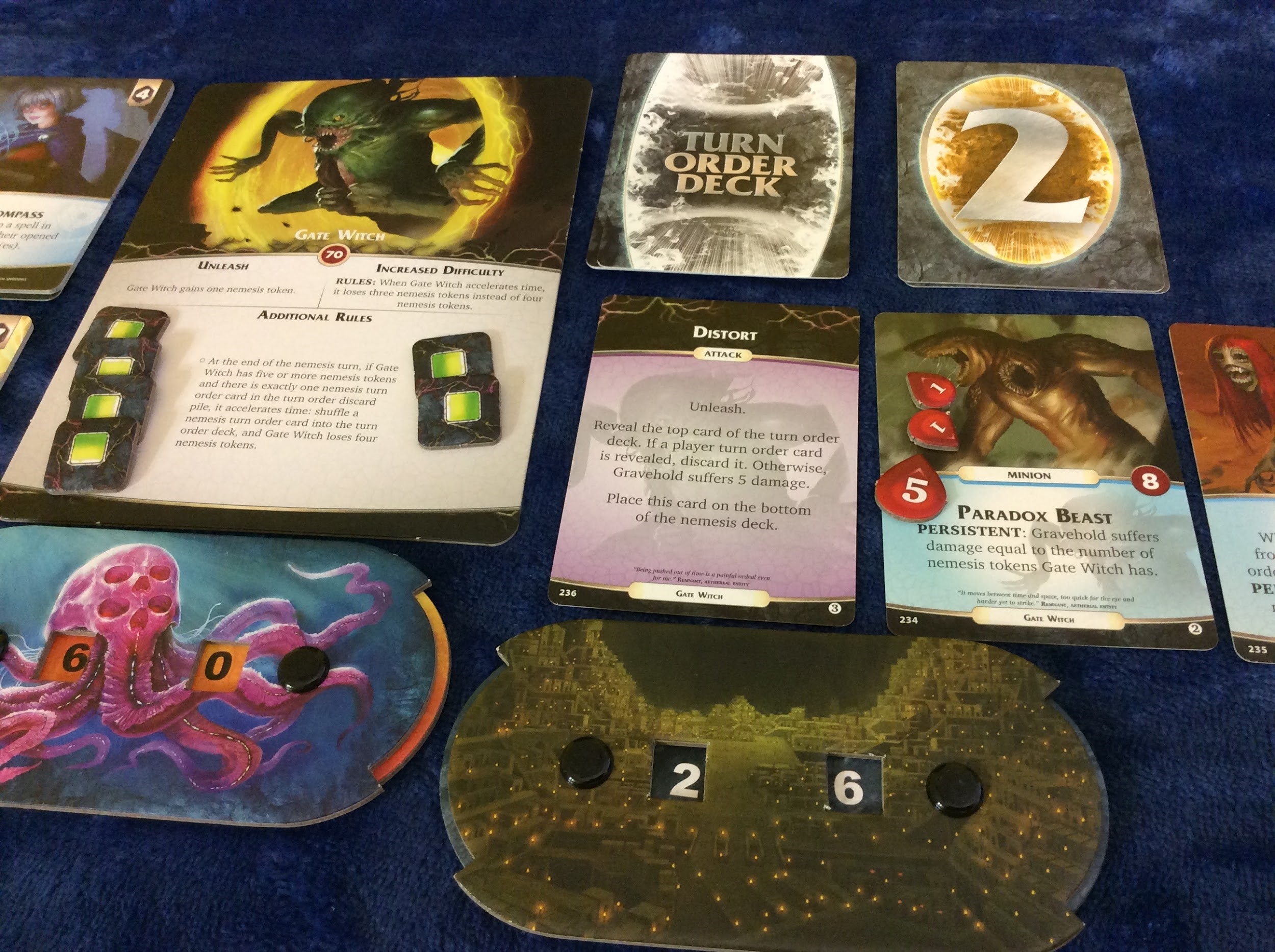 Letâ€™s touch on the visual elements first. The new visual design has a cleaner feel, ditching the age-stained scroll effect and faded colors of the original in favor of a more poppy design. The flavor text is now more clearly delineated from the gameplay text, art bleeds all the way to the edges, and curved lines add dynamism. Some flavor text was squeezed out in the process, but overall, the game feels more coherent and alive. The design of the breach mages and nemeses also traded up to a more vibrant, anime-inspired style without thoroughly destroying the illusion that the characters belong to the same world.

Which is funny, because several of the new mages donâ€™t belong to the same world. The big theme of the new game is strangers and corruption as Gravehold welcomes aid from the void between worlds. Some of original gameâ€™s flavor text read like angsty high school poetry, but the narrative direction of War Eternal actually made me care about the breach mages and their drama.

Mechanically, War Eternal feels a lot more adventurous than its predecessor. Many of the spells now do something every round while prepped, like generate aether (currency) or thin your deck, and Equilibrium even acts as damage-reducing armor. The dangerous temptation is to leave these cards prepped turn after turn, benefiting from their bonuses but foregoing their damage. Other cards do extra things if their supply pile is empty or if itâ€™s late in the game.

Many of the new gems, meanwhile, focus on accelerating the early game. Volcanic Glass is as essential to this set as Diamond Cluster was to the last one: if you overpay for it, you can gain a second copy to the top of an allyâ€™s deck. Frozen Magmite lets you purchase cards to the top of your deck, and Bloodstone Jewel is a high-value gem that can be purchased for an attractive rebate. Finally, relics like Cairn Compass and Vortex Gauntlet increase the speed and consistency of your spell-casting by prepping spells from your discard or returning played spells to hand.

The â€œallyâ€ keyword on many player cardsâ€”effects that could benefit your fellow players but not yourselfâ€”always lent Aeonâ€™s End an interactive feeling, and the new breach mages enhance this. Angsty Mist returns, having earned the epithet â€œvoidwalker.â€ Possessed by the void, her special card lets an ally prep a spell from hand (so that it can fire off one turn sooner), and her ability ignites a fusillade of prepped spells at onceâ€”then redistributes them into alliesâ€™ hands. Dezmodia, a Magical Girl born in the void between worlds, has the power to replace basic breaches with damage-boosting sigil breaches. Yan Magda, an eons-old exiled heretic, arrives from the void with her oathsworn protector, Garu. Garuâ€™s special card focuses breaches, and Magdaâ€™s deals damage every time her breach is focused. Quilius can take a trophy if she lands the killing blow on a minion, encouraging coordination of turn order, and other breach mages take clear supportive roles: henge mystic Mazahaedron can buy cards into other playersâ€™ discard piles, while adviser Gex can thin other playersâ€™ decks by putting their cards into her hand. The strangest new character is a cowardly dirt merchant whose shadow is a frenzied guardian named Ulgimor. His special card, a lump of coal, damages him in exchange for high buying power and a charge on his special ability, making him an incredibly fast starter but vulnerable later on. 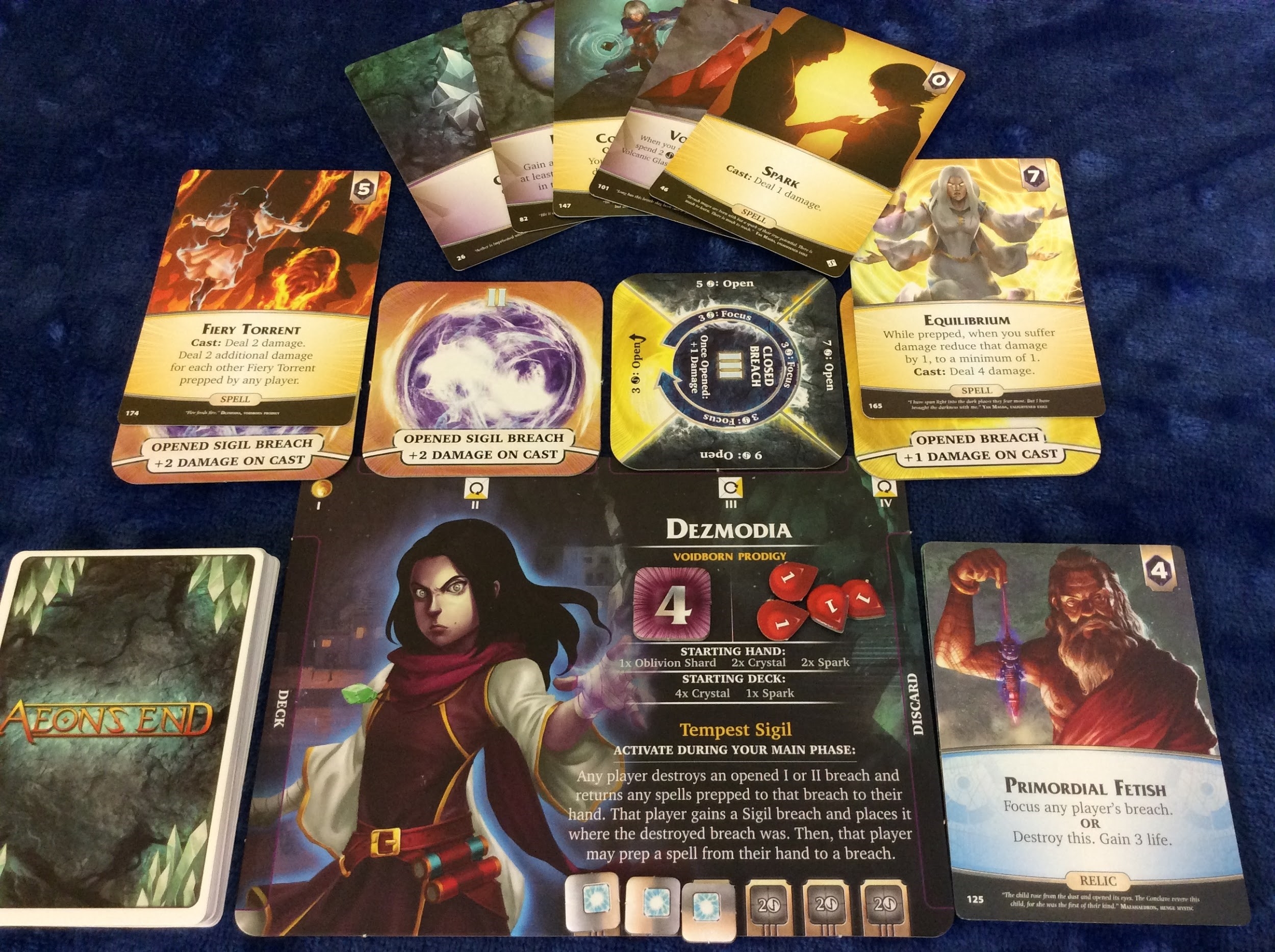 The new nemeses offer nothing as wild as the Carapace Queenâ€™s swarm of minions or the Prince of Gluttonâ€™s attack on the card market; instead, they explore the boundaries of the core, Rageborne-style threat. Umbra Titan is a better introductory nemesis than Rageborne: instead of the purely aggressive and unpredictable Strike deck, it has a small pool of tokens that the players need to prevent from depleting. The Magus of Cloaks and its minions have damage-reducing armor, so youâ€™ll get more mileage from big, explosive spells. Gate Witch is another straightforward, Rageborne-style nemesis, except instead of striking, she accelerates time, racing toward the higher-tier nemesis cards; she also canâ€™t be decked, removing an unsatisfying win condition. Finally, Hollow Crown plays like nine nemeses in one, much like Sentinelsâ€™ Ennead. Each of its nine cultists has a different unleash ability, and they must all be defeated to win.

With more appealing visuals, more interesting breach mage design, and an intriguing new direction for the story of Gravehold, War Eternal is a satisfying next step for a promising deckbuilder.