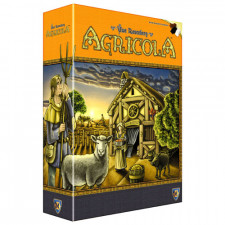 The concept of struggle is one that is perhaps overused in board games, especially heavy Euro designs. Itâ€™s not uncommon to find a game that punishes the player as a matter of course, maybe in the form of some kind of upkeep or a constant barrage of events. In its worst form this is a naked attempt to keep a game challenging, sometimes divorced from anything besides mechanical necessity. But Agricola is a game with survival at its heart, not just the struggle for survival, but also the ability to push past mere survival and into a state of thriving. It earns every bit of that struggle, and eight years removed from its blockbuster release it remains one of the best Eurogames ever.

Agricolaâ€™s impact has been somewhat dulled by eight years of similar games, many of which are by the same designer, Uwe Rosenberg, who has been noodling with many of the same concepts for the better part of a decade. However in 2007 worker placement games were not nearly as common as they are now, and Rosenberg was mostly known for the masterful trading game, Bohnanza. Agricolaâ€™s most obvious ancestor is Caylus, the game that codified worker placement as a genre. In Agricola the workers are members of your family, sent to perform various tasks around a farm like planting crops and building fences. There are a couple different kinds of crops and several kinds of livestock to cultivate, and at the end of the game players get points based not just on how much theyâ€™ve accomplished, but on how evenly they have managed all of the different aspects of the game.

The omnipresent concern in every game of Agricola is feeding your family. Over the gameâ€™s fourteen rounds, there are periodic harvests, where crops and animals multiply, and where you must produce enough food to feed your family until the next harvest. It takes four rounds to get to the first harvest, but they come closer and closer together as the game goes on. While it serves the purpose of making the game challenging and difficult, the impact of this struggle has become evident since Iâ€™ve had children of my own. Agricola taps into the intense feeling of responsibility every parent feels for their children, no matter how old they are. It is a relatable struggle, and it is driven home by several mechanical choices. Many of those choices feel odd when divorced from the focus on survival, such as the uneven pacing of harvests, or the passive nature of the gameâ€™s interaction. Those elements are designed to draw focus to the central conflict of the game. In literary terms, Agricola is a classic example of man vs. nature.

In 2007 most of the discussion surrounding Agricola revolved around the cards dealt to every player. These cards represent occupations and minor improvements for oneâ€™s farm. Each player gets seven of each at the beginning of the game, and as the game goes on they can be played to provide farms with a permanent boost or bonus. The most striking thing about these cards is that there are so many of them. Itâ€™s a shocking amount of variance for what would otherwise be quite a staid, sober game. The big question after all these years is whether these cards are balanced. My answer would be that they are balanced enough, but itâ€™s a question that misses the point of the cards in the first place. The cost to get those cards into play is high enough to rein in even the strongest cards, and anyway they work precisely because they throw off the balance of the game. Rather than an oppressive atmosphere where the players are always a turn away from starvation, the cards give Agricola a somewhat woolly unpredictable feel. They have also guaranteed that it never plays out the same way every time. If you have a combo that makes wheat much easier to produce, youâ€™ll be shooting for different things than your neighbor who is breeding sheep. Itâ€™s what has made Agricola an evergreen title, one that continues the yield new facets with every play. Itâ€™s a game that can easily survive another decade of scrutiny, because it always gives the player a new challenge.

Because of the variance of the cards and the need to provide a food source, Agricola can sometimes bog down as players figure out how to squeeze out a couple more points. Nowhere is this more evident than in the last turn, when food sources are more or less stabilized and players are working hard to optimize their scores before the final harvest. Another possible problem is the illustrations, which are wildly uneven. On one hand they lighten up the feel of the game, and there are a lot of fun Easter eggs hidden in the illustrations. On the other hand, many of them look oddly misshapen and hacky. Neither hurt the experience much, although slow players can make that last turn interminable.

Agricola works so well because it strikes something primal. The struggle for survival is one that everyone understands. But better than that, Agricola allows the players to move past that struggle and thrive. With the right choices, it wonâ€™t always be as hard as it is, a message that every young family likes to hear. Even in a loss, there is something satisfying about looking at your completed farm and seeing how far youâ€™ve come. It rewards experience, but the cards guarantee that it will always pose a logistical challenge for even veterans. Itâ€™s one of those games that strikes a chord and manages to hang around long after inferior games have faded away.