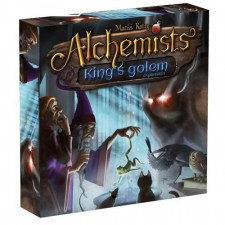 Alchemists is one of the best games in recent memory, driven by a wonderful action selection mechanic that incorporates a clever and intriguing deduction element. So the first expansion, The Kingâ€™s Golem, has a lot to live up to. It canâ€™t skate by with a few variable powers or other generic additions. Luckily, it doesnâ€™t. The expansion lives up to everything fans of the base game would hope for. It includes four modular additions, two of which can be added even with new players. Another expands the breadth but not the depth of the base game. And thereâ€™s one which sends you deep down the deduction rabbit hole.

Brown but not out.

The first module is Startup Funding. Instead of every player receiving the same starting resources, they get four cards with different options. Players choose two of the cards and then simultaneously reveal them. You can get more coins, favors, or ingredients. And, with the right card, you can even get an artifact right from the start of the game. Some even provide you with extra reputation at game start â€“ or deduct it from you.

Next is the Busy Days variant. In the base game, you used the same â€œwake-upâ€ track every round as players vied for turn order. Now, each round produces a new wake-up track with different penalties and benefits. Those penalties might even include losing reputation or actions for the round. It certainly changes the calculus of what players are willing to do.

Expanding the surface is The Royal Encyclopedia. In addition to publishing theories, players can now publish articles in the encyclopedia. They have to do so about an aspect though â€“ red, blue, or green. And choose four ingredients to write about. This provides a totally new avenue for points â€“ and a new one for players to learn from. It also divides the ingredients into Lunar and Solar categories and allows players to visit the library and learn the celestial quality of an ingredient.

Finally is the main piece of the expansion, the Kingâ€™s Golem. Players will test the golem by feeding it ingredients to determine what effects it has. The Golem is reacting to something, but what? Once you figure it out, you can report to the king and also attempt to animate the golem. Do so, and you can find yourself with increased reputation over your peers. But fail the animation, and youâ€™ll lose reputation. Whatâ€™s more, the golem is tested in secret, with no theories to publish.

The first two modules are nice additions to the game, to be sure. Startup Funding allows you to really pursue a strategy from the very beginning. Maybe you grab a bunch of gold because you know youâ€™re going to go artifact hunting. Or perhaps you simply grab all the ingredients you can and become the publishing king. Busy Days, similarly, is a great tweak on the system that can change up the incentives from round to round. The two of them together are a great way to add variety into the system.

But those kinds of additions are pretty common in expansions. Itâ€™s the other two modules that are really exciting. The Royal Encyclopedia not only gives you a new avenue to publish, but also an interesting new tactic for deduction. The publications are challenging since you have to write about four different ingredients and can hedge one at most.

But itâ€™s the golem module that really makes things interesting. Testing your ingredients on the golem will make him steam or glow. From that, you have to figure out which aspects the golem is reacting to. And, only once youâ€™ve figured that out do you have any hope of animating the golem.

While most players will incorporate the golem into their overall strategy, it does put increased pressure on you. Youâ€™ll have to skip that extra ingredient or work with less cash in order to make the most points with the golem.

And that time pressure stays true to the original game. While it remains a two-hour affair, it feels like it goes by a lot quicker. And you find yourself wishing you had extra turns or additional actions. Even with the extra action that the expansion provides, youâ€™ll still feel strapped. Thereâ€™s so much to do and so very little time to do it. Which is really interesting since it incentivizes endorsing theories rather than coming up with original work.

If you canâ€™t tell, this is an absolutely fabulous expansion to an already amazing game. Kingâ€™s Golem creates more challenges, choices, and opportunities, while staying entirely true to the feel and purpose of the base game. If you are a fan of alchemists at all, then there is something for you here. And if you were hoping for more deductive challenges, then Kingâ€™s Golem will deliver.