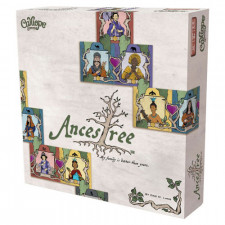 Working casual gamers into deeper games is like getting kids to eat vegetables, requiring a deft combination of speed, bright colors and deception. My wife enjoys playing party games, and can occasionally be talked into Ticket to Ride, but I recently discovered Calliope Gamesâ€™ Ancestree, and its blend of tile drafting and victory points plays fast and loose enough to appeal to party gamers while offering a bit of strategy for the more demanding crowd. Plus, the artwork fuels imaginative ancestries of dubious legality, bringing a lot of laughs to the table. 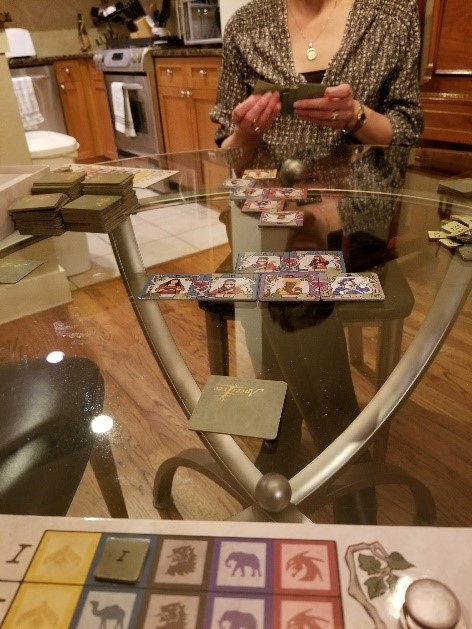 The Camel Clan begins humbly, as camel clans do

Two to six players begin with six tiles each, choosing one to lay down and passing the rest. This first sentence offers grogs a clue as to the inverse strategic relationship; in a two-player game, you know the majority of those tiles are coming back to you, and can plan accordingly. With six players, youâ€™ll never see those folks again, so strategy requires quick thinking and constant adjustment to the game state. Or it goes out the window completely. And with the wacky family builds, most people opt for the latter. 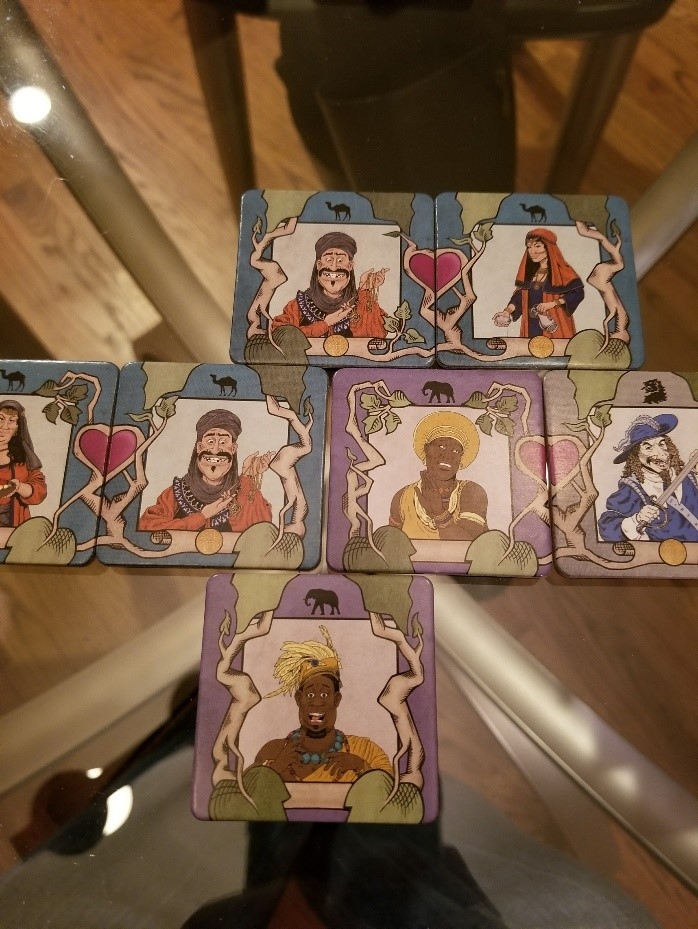 With a family tree like that, Iâ€™d have the same look on my face

Tiles have a picture, an animal representing their clan, and some combination of hearts, leaves and gold. To lay a tile after the first one, it must complete either a heart, signifying marriage, or a leaf, signifying a parent or child. And thereâ€™s another bit of weirdness: trees donâ€™t have to just proceed down the generations. I suppose it could be reasoned that a long-lost parent reappeared from somewhere, but hardcore gamers may balk at this. For me, it was just another chance to add to my weird family history, so my advice is to roll with it.

Each of the three rounds ends when everyoneâ€™s played five tiles and discarded their sixth. Players score VPs for having the longest vertical tree for a particular animal clan, and gather gold if they play tiles with gold coins on them. The coins are merely another source of victory points at the end, but add a bit of flavor to the game, like a very light version of Legacy: The Testament of the Duke de Crecy. Marriages also add more VPs at the end, prompting the assertion from my wife that marriages are worth more than gold (I heartily agree, and not just because sheâ€™s going to read this), and both provide players who draw a bad hand with more options to stay in the game and plan for the future. 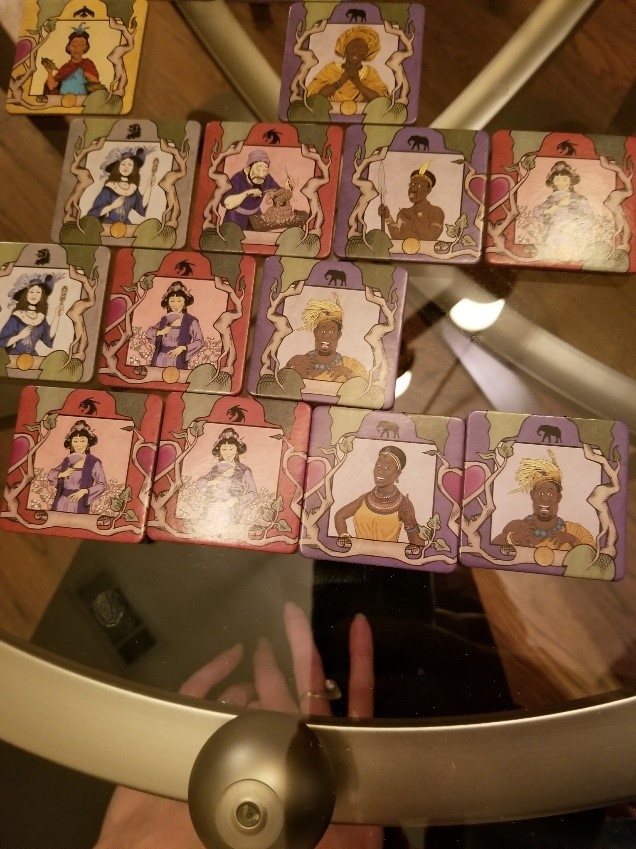 The speed of this game caters well to both extremes of the gaming spectrum. Light gamers will toss tiles, have a good laugh, count points and repeat, while hardcore joueurs will only be frustrated that their procreation engine got broken because of the play of their inferiors for a short time, since an average game of Ancestree easily wraps in less than thirty minutes. Letting go and learning to love the madness is the key to full enjoyment of this game, since its simplicity opens the door to your imagination, creating a game where hearing a playerâ€™s explanation of their family tree becomes more entertaining than winning the game itself. 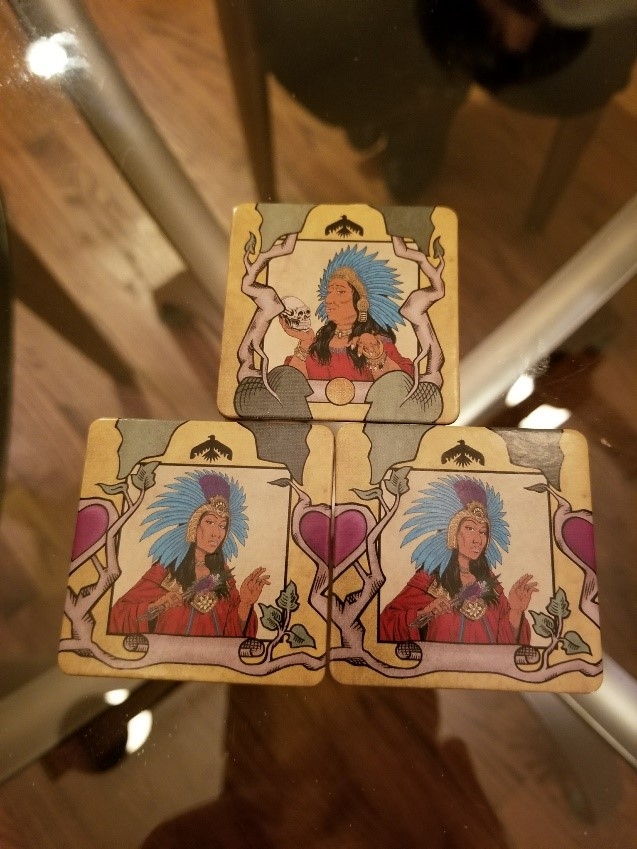 Mom, is thatâ€¦Dadâ€™s skull? Shut up and marry your twin sister!

And, well, itâ€™s also vital to let go because the tile draws are so random. While the game rewards keeping clans together through the generations, it also values clan diversity, and maximizing the combination of the two is practically impossible with a six-player game, so players focus on having the craziest story and the most marriages, with the two feeding each other in a way the Lannisters could only dream of.

Party gamers, rejoice. Ancestree is a funnier option if Flashpoint: Fire Rescue leaves you worn out because you can only take so many buildings falling on your head, or because, like me, you see no point in rescuing cats. Serious gamers, take note: Ancestree hides the vegetables, introducing reluctant strategists to tile drafting, multiple paths to victory and planning several steps ahead, and one can only hope their tiny footsteps into Mordor go unnoticed until itâ€™s too late to turn back.