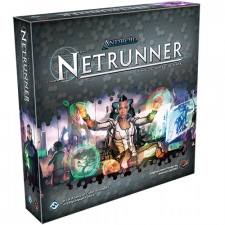 Android: Netrunner is Fantasy Flight Gamesâ€™ Living Card Game reimplementation of a defunct 1990â€™s CCG by Richard Garfield. But no knowledge of the prior version is required or even helpful to success in Android: Netrunner. Instead, all you need is a plan, a well constructed deck, and nerves of steel.

Netrunner is an asymmetric two player game. One player is the vile corporation â€“ a large conglomerate with designs on taking as much money, time, and freedom from the masses as possible. The other plays the Runner â€“ a hacker intent on making their way into the Corp and stealing its most precious, most compromising secrets. Both players are out to score agendas â€“ those secret corporate plans. The Corp player must build a certain number of agendas into his deck. The Runner wins by finding those agendas and exposing them. The Corp wins by installing and advancing those agendas to completion. The first player to seven agenda points wins.

The best part of Netrunner is the inherent asymmetry. While the Runner tries to overcome the Corpâ€™s defenses, the Corp installs Intrusion Countermeasures (termed â€œiceâ€) to defend its hand and deck. The Corp can also create new piles of cards (termed remote servers) where he can install and advance his agendas. Those servers can also be protected by ice. The Runnerâ€™s job is to make it into those remote servers and access the agendas. Or, to run at the Corpâ€™s hand or deck and hope to pull an agenda sitting there. To be successful, the Runner needs to get passed the ice protecting it.

Runners can play any number of ice breakers, various programs that can defeat different kinds of ice. Typically, ice breakers are powered by credits that the runner earns through actions or other cards. But the Runner has to be sly. Just because a Corp has advanced a card in a remote server doesnâ€™t mean itâ€™s an agenda. In fact, the Corp has several booby traps that, if the runner accesses them, actually harm the runner. In fact, some cards are so deadly that they can kill the Runner outright, ending the game in a Corp victory.

While the asymmetric game of cat and mouse is baked into Netrunner, the game is so much more than that. In fact, reliance on mere bluffing is a recipe for disaster though some bluffing is necessary. Like many constructed deck games, the match starts before you ever sit down against an opponent.

Before the game, players must build their deck. For a Runner deck, the player selects one of three factions (Anarch, Criminal, or Shaper). For a Corp deck, one of four corporations (Haas-Bioroid, Jinteki, NBN, or Weyland). Each faction has an identity that provides a unique ability. In the base game, there is one identity per faction. But as expansions have been released, each has received alternate identities that provide different powers.

Whatever faction is chosen, the player has access to all the cards from that faction. And each feels very different. Haas-Bioroid relies on credit generation and cheap ice that can be broken by actions instead of credits. Meanwhile, Jinteki tries to trick the runner and uses various ambushes in its remote servers.

There are also neutral Runner and Corp cards that can be used by any faction. Each faction identity also gives a budget for out-of-faction cards. Each out-of-faction card has a point cost and a deck can use up to the budget allowed by its identity. So, if youâ€™re building a Shaper deck, your access to Criminal means or Anarch tricks is more limited. While it seems constricting, it keeps the decks to flavorful themes, and provides just enough insight into what your opponent may have up his sleeve.

Building decks in Netrunner is seriously fun, assembling builds based around certain combinations of cards, countermeasures, aggressive tactics or long-term strategies creates endless possibility. Maybe youâ€™ll want to leverage some viruses to destroy ice while you run through. Or youâ€™ll run Inside Jobs to get around ice without having to deal with it. Or maybe your plan is to just use high quality ice breakers to get you through more efficiently. Building a deck is like playing dozens of hypothetical mini-games in your head as you decide what to include and what doesnâ€™t make the cut.

Deck construction in the base game is unfortunately limited, though. There is one set of neutral cards and a deck for each faction. But you need to combine all of the included neutrals with a faction to have a full deck. This means that you can really only field one deck for Corp and one for Runner and thereâ€™s a lot of overlap between factions. Certainly enough to play, but the base set seems designed to give you a flavor for the game, not the full experience. Luckily, Netrunner is consistently expanded through sixty card datapacks. The datapacks are fixed â€“ meaning there is no blind or hidden reveal and no â€œrareâ€ cards. You know precisely what will be in the pack. After even just a few, you will have more than you need to create interesting and competitive decks.

Netrunner also has an established tournament scene. While it may not be as popular as that other Richard Garfield game, finding Netrunner players isnâ€™t difficult. If tournaments and competition are what youâ€™re after, then Netrunner can provide. And if youâ€™re looking for something to play a little more casually with friends, Netrunner scores solidly on that account as well.

But Netrunner is a blast to play in any setting, competitive or casual. As the Runner, you take calculated risks and make uncertain advances. Overly cautious play might allow the Corp to score agendas while youâ€™re still setting up. As the Corp, you put on your best poker face and pretend like everything is an ambush â€“ all the while secretly hoping the Runner doesnâ€™t choose the one server where youâ€™ve hidden your agenda.