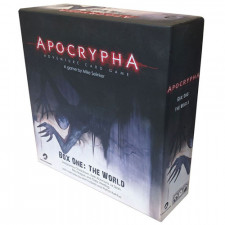 Nobody else can see them, but you can: the monsters that lurk at the edges of our consciousness. And now, theyâ€™re gearing up for another apocalypse.

Apocrypha: The World is an adventure card game from Mike Selinker and Lone Shark Games. If that teamâ€™s Pathfinder ACG is your touchstone ACG, Apocrypha will be pleasantly familiar...on the surface. In both, you explore locations (â€œnexusesâ€ in this gameâ€™s terminology) composed of randomly assorted good and bad cards (â€œgiftsâ€ and â€œthreatsâ€) plus scenario-specific baddies (â€œmastersâ€ and â€œminionsâ€). Getting the goods and defeating the bads both require dice-driven, stat-based checks, and the ultimate goal is (usually) to â€œsealâ€ all the nexuses by clearing them out or defeating the masters or minions within. Your deck is your life, but it also represents the tools and allies at your disposal, and after every session, win or lose, you get to rebuild it with the new cards you picked up during play. More lasting upgrades come in the form of ancestral memory fragments, rewarded for winning a scenario and slotted into an eight-card â€œhaloâ€ around your hero, or â€œsaint.â€ A gamblinâ€™ granny, a rastafarian vodouisant, and a bad cop walk into a park.

Beneath these surface similarities hides a world of mechanical innovations. The dice-rolling mechanics are intriguing. Each check, youâ€™ll build a pool of six-sided dice based on the â€œvirtueâ€ (stat) youâ€™re testing against. No matter how many dice you roll, however, you can keep only three to add together as your check result. Itâ€™s streamlined and intuitive while feeling new, but itâ€™s also self-limiting: the band of potential results is narrow enough that the checks feel less diverse than they should.

More successful innovations occur in table positioning, skill use, and a brilliant card cost hierarchy. Table positioning is critical because each power and virtue corresponds to an arrow icon. Up arrows affect other saints at your nexus, down arrows affect yourself, and left/right arrows affect the saints seated to your immediate left or right. Cards slotted in your halo work the same way, so you can choose whether a fragment targets you, a neighbor, or another ally.

The skill system is simple but effective. Each saint has a few skills, like â€œSense,â€ â€œResist,â€ or â€œStrike.â€ When a card youâ€™re checking against has the matching skill (twinsies!), you add your skill number in bonus dice against that check. This works great thematically, but it also has an impact in deckbuilding: any card you play to add dice to a check also adds its skills, so if the minotaur Iâ€™m fighting doesnâ€™t trigger my Sense bonus, I can use my Camera Obscura to add it.

Equally clever is the card cost hierarchy. Whenever you play a card, you do something with it: sacrifice it to the box, discard it, recycle it under your deck, et cetera. These costs are ranked, and some powers shift that rank up or down. The vodouisant River Batiste, for example, can lower the cost of cards he plays with the Conjure skill, and the difference can be huge, letting you hold onto cards that should be one-use or recycle healing cards into your deck instead of discarding them. Together with skills, it suggests directions for deckbuilding beyond the cardâ€™s printed power.

The oddball theming is often Apocryphaâ€™s biggest asset. The cast of unlikely heroes includes sk8r grrrl Ruby Doomsday, flower child â€œkarmacologistâ€ Ophelia Willows, unlicensed necrosurgeon Dr. Zeez, and Diana Jones, the â€œWorldâ€™s Luckiest Grandma.â€ These are fringe folk, eccentrics just as likely to rebalance your chi as whack you with a murder stick. Tools of the trade include worry beads, espresso shots, fortune cookies, and candied apples with extra razor blades. Threats might be cryptids, tie-snakes, spy drones, authority figures, and therianthropic street gangs. One mission had me rescuing children from rampaging self-driving cars, while others saw me attending a Faustian community theater production or escaping an evil corn maze.

The thick storybook introducing the core setting of Candlepoint, a bucolic town in Wisconsin that happens to be a nexus for all things supernatural, and descriptions of the nine introductory missions do a nice job of depicting something sinister lurking beneath the seams of reality. The core box also includes the Skinwalkers chapter, which takes the game to a Chicago overrun by shapeshifters, with eight more continent-spanning chapters to come across two additional boxes. The weirdness is often played for laughs, and references abound in both the artwork and flavor text: five minutes in, Iâ€™d spotted homages to Evil Dead 2, the Hudsucker Proxy, It, Star Wars, and Christine. 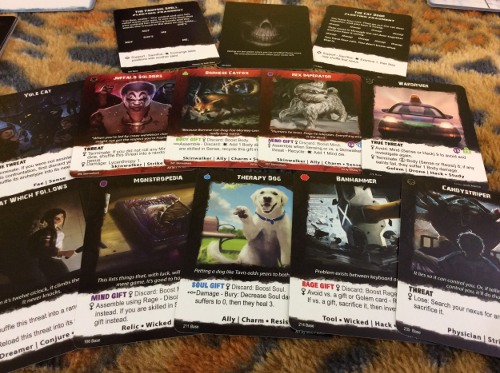 Sometimes, though, the weird setting works against the game. Apocrypha is mechanically more abstract than Pathfinder ACG, which already required a lot of filling in the blanks, narratively speaking, by the players. Why did I find this here, and how did I use it to overcome this threat? This has the added burden of obscurity. I can imagine how I might use a mason jar to capture a spirit, but what the heckâ€™s a Mondrian Cell or a Wolfram Cube? You can spot most connections if you squint, but thereâ€™s gonna be a lot of squinting.

Apocryphaâ€™s answer to this rampant myopia is guided mode, a card-driven RPG using Apocryphaâ€™s mechanics. I havenâ€™t tried it, but this is probably the way to play Apocrypha, since, apart from the obscure narrative, the cooperative game can be capricious in its difficulty and arcane in its mechanics. Iâ€™ve had games where setup lasted longer than the mission itself, and others where I lost despite passing every single check. Between the unhelpfully flavorful terminology, the innumerable phases and sub-phases, and the alien iconography, reading a card feels like deciphering Enochian texts--theme-appropriate, but not very player-friendly. Furthermore, the mission structure, which comprises three generic Structure cards plus one for the mission, tries for flexible but often ends up merely baffling, since the individual mission rules frequently override or ignore those on the Structures without explicitly mentioning it. Selinker has said he wanted Apocrypha to give new GMs an easier entrÃ© into roleplaying, which is a real laugh considering you need a Ph.D in Numerology to even learn the game.

Much of Apocryphaâ€™s promise is in its nonlinear campaign, where you can play any mission from any chapter (and gain its lasting rewards) in any order. As such, it feels like a disservice to review the game when 89% of that content is still in the future (The World has only one â€œrealâ€ chapter, the nine Candlepoint missions lacking any lasting impact and acting more like worldbuilding teasers). I sense great potential within, but itâ€™s still got a lot to prove.