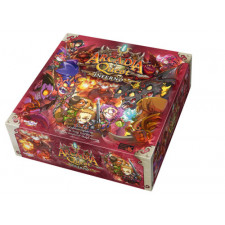 CMoN released Arcadia Quest in 2014, and its unique combination of dungeon crawling and PvP action drew a lot of fans to the violent, and slightly comical, kingdom of Arcadia. Lord Fang and his beasties were bested by one of four different guilds of heroes, but peace was to be short-lived. Now the demons are angry, and the only way players can stop them is by descending into the Inferno. Those familiar with Arcadia Quest will find similar gameplay here, but for newbies to the realm, lemme 'splain. No, is too much. Lemme sum up. 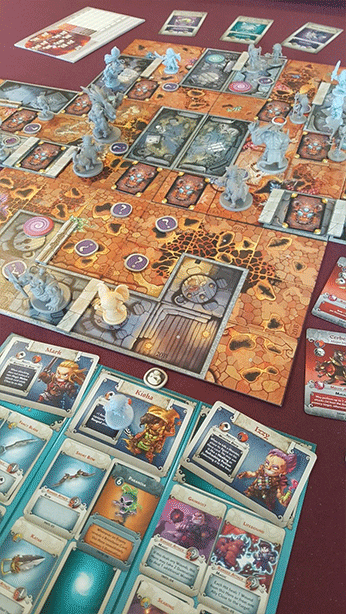 Two to four players create a guild of three unique heroes, choosing among the twelve that come with the game. The heroes are outfitted with weapons and you pick one of two starting scenarios. To win, a playerâ€™s heroes must complete two of the available PvE quests, with three- and four-player games adding a third, one of which must be PvP. Yes, while adventuring through hell and dispatching foul beings toâ€¦well, further into hell, I guess, players may take occasional aim at one another, and can win a scenario by killing another playerâ€™s hero.

Activate a hero each turn, move and attack, and repeat. Heroes roll a special d6, looking for melee or ranged symbols, depending on the weapon employed, and gaining bonus hits from the crit symbol. When attacked, heroes and certain monsters roll defense dice to mitigate the damage. Or players can rest to refresh exhausted weapons and bring back slain heroes, because even in hell, death isnâ€™t permanent.

As before, a branching quest system sends adventurers on one of two main paths to the depths of the underworld, with the scenario winner choosing the next battle among available options, guaranteeing players will need a minimum of two trips through the flaming bowels of inferno to experience all it has to offer.

So whatâ€™s new? Besides the monsters, Inferno offers three main tweaks from its predecessor: Damnation, Brimstone and Angels. The first is an interesting blessing/curse, totally befitting a battle in hell, which allows special abilities like re-rolls or extra dice at the cost of token accrual. And piling up damnation tokens hurts in two ways; either making you a target for a Brimstone card, or by giving additional death curses at the end of a scenario, even if that hero never died once. Itâ€™s a clever risk/reward thatâ€™s right at home in hell.

Brimstone cards scatter about each scenario, similar to the previous gameâ€™s exploration tokens, which make their return, bestowing heroes with healing, gold, or if I find them, a trap. Brimstone is different, requiring an action to flip and giving the finder an immediate benefit, like getting to activate a monster and send it after an opposing hero, or adding damnation to the enemy. Some can hurt their bearer, however, so flip with care. Itâ€™s hell, after all.

The best add may be Angels, just edging out damnation. Five of them have been dragged into the inferno, and players have the opportunity to save some, depending on the path they choose and how the scenarios are resolved. 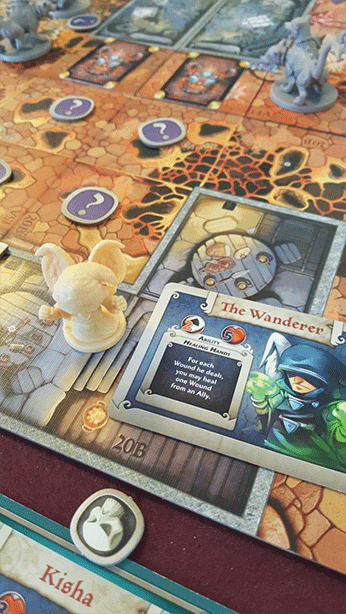 You can tell by the wings

Once rescued an angel can immediately join that playerâ€™s party, replacing one hero and keeping all the latterâ€™s gear. Each scenario afterward, the guildâ€™s makeup can be shuffled as the owner desires. They can be a handy addition to a guild, or an impediment if left behind. Refer to my previous comment regarding hell, because thereâ€™s not a way to rescue them all. Angels not freed are waiting for the party in the final fight, and theyâ€™re not happy about being ditched.

Inferno is compatible with the original Arcadia Quest, so any heroes can be used in either game, giving the world of Arcadia even more replayability. The art, humor, tactics, and dice have carried over from its predecessor, creating the same enjoyable experience. Of course, it can be occasionally derailed by a mini-series of horrific dice rolls that can leave one guild bringing up the rear while the remaining heroes rake in the upgrades, but never fear. Every guild makes it to the final battle, and as we learned in my last Arcadia quest, all it takes is one lucky shot to win it all, so take heart, brave adventurers! Whether youâ€™ve mounted Lord Fangâ€™s head in your trophy room or are new to the realm and wondering what that star on the wallâ€™s for, Arcadia Quest: Inferno will give you the chance to unleash your inner champion and send the foul minions of hell to a different part of hell, which is out of your path and probably unpleasant for them in some way. 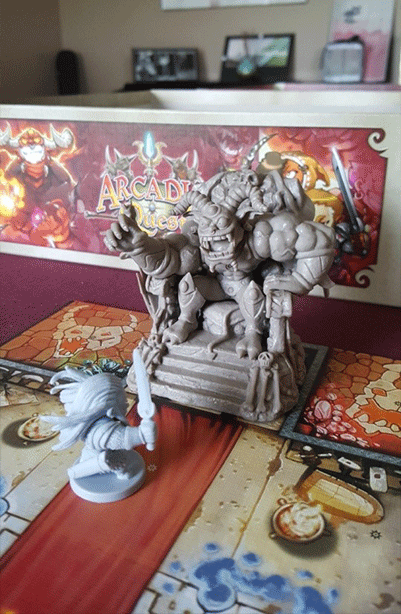 I got this, bro