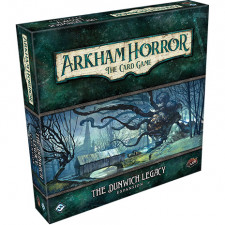 The Arkham Horror Card Game core set is a great product. I happily gave it 5 Stars when I reviewed it. It provides an engaging and self-contained campaign experience and yet it also serves as a foundation. â€œThereâ€™s more to comeâ€ it says, and even the rules reference future expansions that have already been planned. Well the future is here, and itâ€™s just as good. The Dunwich Legacy is the first Deluxe Expansion for this LCG, and as such also serves as a foundation. Each of these deluxe expansions will be the first couple of chapters of new campaign arcs. The Dunwich Campaign has already been announced as (at least) 8 scenarios; almost triple the length of the scenario we enjoyed in the Core Set. Itâ€™s not just a foundation however, as it must expand what came before it and deliver on the promises made by that core. 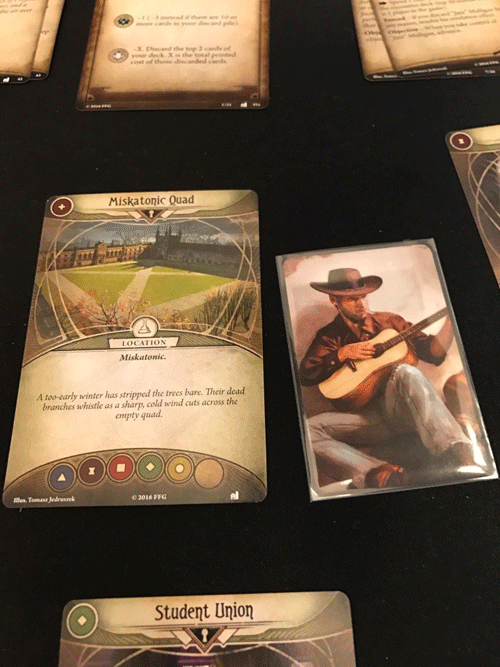 My time at University was decidedly less Occult-y.

Lucky for us, it does. The concern of any campaign or story-driven game is that the system becomes stale. When I expand a campaign game, I donâ€™t just want more of the same mechanics or play experience packed with new art and flavor text. Iâ€™m here to play, not read. I had both high hopes and high expectations for this expansion, and it exceeded them all. This expansion doesnâ€™t just launch a new campaign, it reveals how dramatically flexible the designers are willing to be with this system.

While the structure of each scenario in the Core set was a little different, they all followed the same pattern. Investigate a location against a target number a few times, cash in your clues to advance, and keep at it. One thing I enjoyed was Scenario 2â€™s alternate way of dealing with monsters and the Dunwich Legacy extends that to the core mechanic of investigating. One of the scenarios â€“ theyâ€™re playable in either order â€“ sees you in a speakeasy gambling room. Clues here are discovered through mini games that ape casino games of chance. The other forgoes the tokens representing â€œcluesâ€ and instead has you spending them like currency to burn through the encounter deck in search of a VIP. Only once youâ€™ve found him and his skeleton keys can you continue your branching investigation. 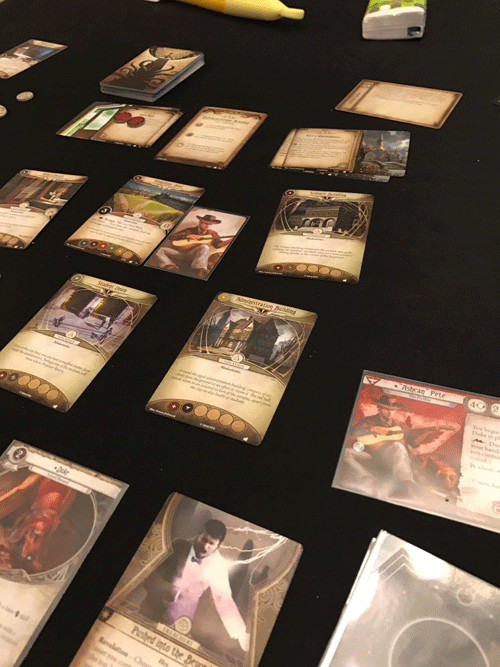 Fitting for the foundation of a new scenario arc is the variety of resolutions you can explore. Iâ€™m avoiding spoilers, so this isnâ€™t literal, but resolutions in the Dunwich Legacy are less â€œGood, Better, Best, OH GOD ITâ€™S HORRIBLEâ€ and more nuanced and gray. You may have obtained the McGuffin but you let that bus of kids fly off the cliff in the process. Or maybe you rescued the kids but in the process the monster escaped and killed your VIP. The results are more impactful because itâ€™s obvious that you canâ€™t do everything and because it was your choice. When you donâ€™t win simply by gathering enough clues but because you ignored that bus on purpose, it hits just a bit harder. And when you donâ€™t know if that little note you write in your campaign log will come back soon or maybe 4 expansion packs down the road, it weaves a just a little more tension into your actions and decisions. My single gripe, and itâ€™s minor, is that there are only 2 scenarios and that the thematic intent is to have your initial decisions matter and be baked into your character through your deck upgrades. Technically speaking, Iâ€™m not supposed to replay over and over to find out the other options because that changes the story. Iâ€™ve settled for making my first play the â€œofficialâ€ one Iâ€™ll go back to with future expansions.

Of course thereâ€™s more to this expansion than the fantastic introductory chapters to this campaign. It also comes with a new team of Investigators. Theyâ€™re old friends to anyone who has played the Arkham Files games, but reinterpreted in ways appropriate to the new game. Jim Culver is here with his trumpet, calming friends and allies with melodious jazz. He can forgo any bonuses given by the whims of the chaos bag in favor of healing, but when his â€œFinal Rhapsodyâ€ weakness appears the Fates may take brutal revenge. My favorite new character, Ashcan Pete, brings his trusty pup Duke along. Duke helps Pete when it comes to fighting and investigating and can even be reused over and over. All you have to do is discard a card to ready him again, a great little mechanic which ties into the setting. Peteâ€™s a drifter without much care for material things. Itâ€™s him and his dog and heâ€™ll happily toss away his stuff â€“ theyâ€™re just things after all â€“ for old Duke. 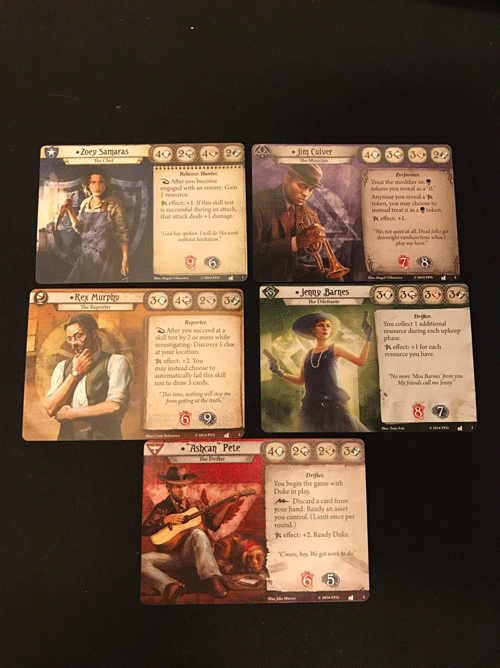 New character cards to add to your decks are included, both completely new and leveled up versions of old favorites. Theyâ€™re compatible with old and new investigators which means ample opportunity to continue your delve into the mysteries of Arkham. Some of the cards canâ€™t even be used until future expansions come out, a move that is as infuriating as it is tantalizing. It feels like the Great Old Ones designers are messing with me on a meta level.

The Arkham LCG was one of my favorite games released (just barely) in 2016, and I eagerly awaited the next chapter. Part of my excitement was based on the promise that future expansions would be as enthralling and beguiling as the core. The Dunwich Legacy delivers on all that and brings its own promises. Itâ€™s both the next step and another solid brick in the foundation of a system I continue to be excited to play over and over until the next expansion arrives.