GP: I blame Raf. I was content to ignore Arkham Horror: The Card Game altogether, but he kept raving about how great it was. As a wannabe RPGer, Iâ€™m always drawn toward story-driven campaign games, but an LCG? Thatâ€™s a commitment. I gave in though and bought the starter set. I was hooked. Every month, I waited four long weeks for the next mythos pack and snatched it as soon as it released. The Dunwich Cycle, consisting of two scenarios in the deluxe expansion box and six mythos packs, was a thrilling ride of unspeakable horror for my intrepid investigator, â€œSkidsâ€ Oâ€™Toole.

RC: Arkham was not my first LCG so I was used to the monthly packs, but I was surprised to see how much I looked forward to each release. Iâ€™ve become so used to binge watching an entire season of a show in a weekend that I forgot what anticipation feels like. There were 4 of us playing through this campaign and each session ended with us pouring through our decks to find weaknesses and rushing the next pack to the table when it arrived. While that were some packs I liked more than others, the whole story of the Dunwich cycle was engaging and exciting. 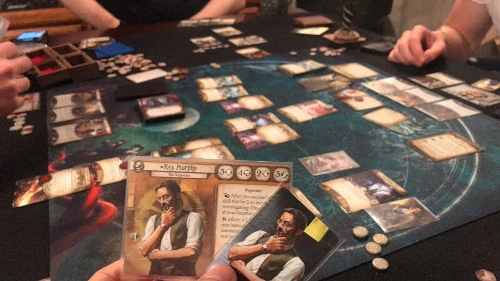 GP: The thing that impressed me most over the cycle was how creatively cards were used. Just moving the cards around on the table transported you onto a train, a hill, a backwoods town, and numerous other settings. It gave the feeling that you really were moving around, investigating what was happening, and trying to piece together clues. That said, the game isnâ€™t really a mystery in the sense of figuring some solution out. It is much more of a journey and you can feel the expletive-inducing moments with every flip of the encounter deck or movement to the next location. All of this is also highly dependent on the deck you build and the earlier choices you make (yes, what you do in the story matters later on!). My buddy Skids was a decent fighter and even better at strategically evading tentacled uglies when necessary. Any test requiring willpower though and Skids failed like a toddler in a toy store.

RC: It was definitely not a mystery to solve so much as a story to experience. The LCG doesnâ€™t have any puzzles per se, just strings of difficult decisions and character growth that come back to haunt you. Playing with 4 investigators afforded ole Rex Murphy the opportunity to specialize in gathering clues. I was a clue farming machine who had to flee in rapid terror any time a monster showed up. His fellow investigators were ready with a tommy gun as needed, but unfortunately the specialization boxed us into roles. That said, the system worked beautifully with 4. Throughout the adventure we all had our chances to shine.

And what an adventure. Each pack brought with it a new surprise. I mentioned it when I reviewed the core set and the Dunwich Deluxe expansion but what makes this game so special is the way the mechanics reinforce the narrative. The Essex County Express truly feels like youâ€™re rushing through a train in a desperate attempt to survive. The shifting locations in Lost in Time and Space do more to make me feel like Iâ€™m in another dimension than any Cthulhu game thatâ€™s come before it. There is an unfortunate side effect of constant rules overhead, but itâ€™s worth it to play this system.

GP: Lost in Time and Space was so trippy! No one who knows me would ever call me a thematic gamer, but each mythos pack made me consider turning in my cube pusher membership card.

RC: Iâ€™d be happy to take it and return it, corners clipped. 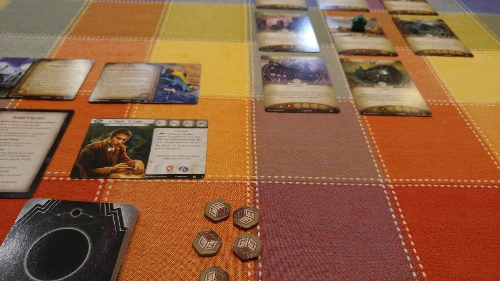 Yes, that is indeed a meeple being used instead of the player card.

GP: As for the rules, I actually didnâ€™t think the overhead was too bad. Like any complex card game, there are always edge cases and sometimes you have to just go with what feels right (or, in the case of this gameâ€™s â€œgrim ruleâ€, itâ€™s whatever messes you over the most). I eagerly read through the setup for each mythos pack, excited to see what new place is trying to kill me next. The flavor of each scenario is so different that you canâ€™t help but be pulled in. This is particularly notable considering, unlike Raf, I played through the whole cycle solo. I totally have friends (Right, guys? GUYS?), but playing through the Dunwich cycle by myself was my version of a spa day. Arkham Horror: The Card Game is single-handedly responsible for getting me into solo gaming.

RC: It really is a fantastic solo experience. I was playing a solo campaign parallel to my 4p campaign, though I eventually dropped it. That leads me to my only concern with the Dunwich legacy and future campaigns. Iâ€™m in this for the story and while there are some branching paths and different options, Iâ€™m not sure how often Iâ€™m going to go back and replay scenarios. This wouldnâ€™t be a problem except I have so many cards in a binder I havenâ€™t even looked at, to say nothing that Iâ€™ll probably never use them. Do you find it at all wasteful?

GP: Yeah, I suppose that is the elder god in the room that we have to address. With so many cards in each pack, I ended up ignoring the majority of them since they didnâ€™t fit with my deck (either due to deck restrictions or personal preferences). I keep telling myself that Iâ€™m going to go back through the scenario with a different character, but with the onslaught of new content and retirement still being decades away for me, I donâ€™t know how realistic that is. I kind of figured those playing with a group could benefit from the new cards, but it sounds like you didnâ€™t have that experience. I guess thatâ€™s just the literal price you pay for drinking the LCG Kool-Aid.

RC: They could in theory, but weâ€™re all so hooked on this game that we have our own sets. Iâ€™ve seen most of the cards I just havenâ€™t played with them. Luckily, theyâ€™re evergreen so I can use them on The Path to Carcosa, which just came out. My excitement for this game has yet to slow down at all, so Iâ€™m obviously jumping into the next campaign with reckless abandon. I think it was important for the first campaign of this LCG to be great and I think FFG nailed it. At no point did it feel stale and, taken as a whole, the campaign was full of tense moments and cliffhangers. They seem to be pushing the envelope in terms of weaving mechanics and narrative and I am excited for the future.

GP: Absolutely. I was sad to put Skids away, but Iâ€™ve moved on to a new man to start Carcosa with and, spoiler, weâ€™re already smitten.