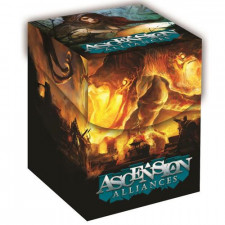 Critical Hits: Low cost; improves the 4 player game greatly; combines with any of the sets.

Critical Misses: Only 28 cards, which can get lost in the larger mix; Alliance mechanic not fully explored.

In all my many, many, games of Ascension, I have never once thought about playing as a team. That would take away one of the joys of deckbuilding games: solitarily building your own deck and hoping it's got enough one-two punch to outscore your opponent. Instead, Ascension: Alliances forces you to cooperate with a partner who youâ€™re going to share honor points with.

It's theâ€¦ eye of the Giger, itâ€™s the thrill of the hunt.

Alliances consists of just 28 cards and one fancy deck box. These 28 cards, shuffled into any Ascension set of your choice, all have effects for you as a team or for your ally. The previously seen term â€œuniteâ€ is now â€œteam uniteâ€ in Alliances, meaning that the bonus goes off when your teammate plays a card of the same faction. Here is where you can coordinate as to what cards are going into whose deck. Because team turns are simultaneous and you can share information (i.e., show your partner your hand and vice versa), there can be some calculated discussion as to what to buy, who can kill what, and perhaps even pulling something from the center row in hopes that a better card will pop out for your partner. The idea of having to confer with someone about what Iâ€™m doing sounded like my partner was going to have to approve each of my turns. Itâ€™s actually nothing like that. Your individual turns maintain their independence while the collaboration is actually rather engaging. Though you cannot buy cards for one another or exchange cards in your hand/deck, the shared honor points encourage you to work together in a natural way.

The other types of cards found in Alliances are entirely new: banners. These mega-points cards require both partners to spend runes and/or power. Once purchased, banners go directly into play and award the team some kind of ongoing effect. Sigil of the Eye, for example, allows each player to draw an additional card at the end of their turn. Pretty cool, but each partner has to pony up six runes to get it, which makes sense considering itâ€™s worth 9 honor points. Mark of Deofol lets you spend power as runes and nets you 10 honor points, but it also requires 6 power from each partner The huge cost of these banners, and there only being five in the set, often means itâ€™s up to the random shuffle gods to bestow the right combination of cards in your and your partnerâ€™s hands. When it does happen though, it feels as though youâ€™re slamming that banner into the battlefield, celebrating your teamâ€™s accomplishment. 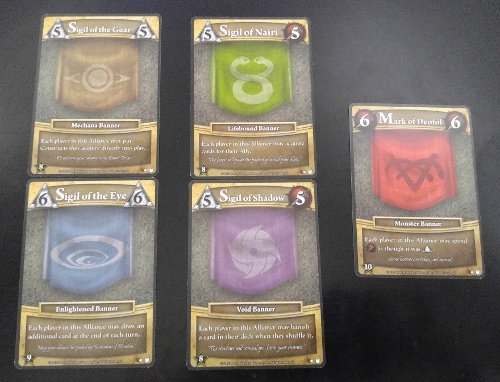 Typically, Iâ€™d never agree to a 4-player game of Ascension as itâ€™s just not worth it. However, with Alliances, the multiplayer game is just as snappy as it is with two â€“ my preferred player count. Because teams take their turns simultaneously, the downtime is minimal. Plus, when itâ€™s not your turn, youâ€™re showing your teammate your next hand of cards, slyly winking and pointing at the center row. Just donâ€™t make it too obvious what your plan is otherwise the other team will snatch up that construct youâ€™re eyeing.

Sorry, no song pun for this caption.

The fact that you combine Alliances with any other set of your choosing is both a pro and a con of this small box expansion. On the plus side, you can play with whatever set you enjoy most. Love the power shards from Rise of Vigil? Go for it. Want to combine the two best sets ever, Realms Unraveled and Dawn of Champions? You know Iâ€™m doing that. The downside though is that 28 cards can get quickly diluted in a big box set of 200+ cards. Most of the game feels the same as the set normally does. It wouldâ€™ve been great if there were more cards to mix in to give you the full flavor of teamplay. As it is, itâ€™s more like an occasional reminder that â€œoh yeah, thereâ€™s Alliance cards in here!â€ instead of it being an integral part of the game. Because the teamplay works so well, while maintaining that same Ascension feel, it actually makes you pine for more partner-tastic combos. You often wish you could combine runes and/or power. However, I understand that that would create insane mega turns that are too much even for the swingiest game of Ascension.

Overall, for $10, Alliance is a nice option to have. I will never bother with individual 4-player Ascension again. Hey, I may even be willing to play 6-player with three teams. Then Iâ€™d have a use for all of those extra starting decks that each expansion keeps including.