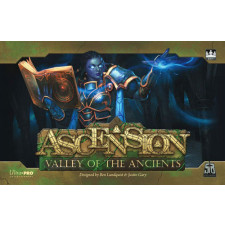 Ascension: Valley of the Ancients Review

Ascension releases to me are like a favorite TV show starting a new season. Whoâ€™s back? Whatâ€™s changed? Whatâ€™s new? This season, we have Valley of the Ancients, which unfortunately might be one that youâ€™re okay skipping over.

Iâ€™ll start with the main attraction in Valley of the Ancients, which are temples. There are three temples â€“ Life, Death, and Immortality â€“ that players vie over, gaining and losing control over the course of the game through keystones. Some cards have either a life or death keystone on them. Certain heroes or constructs trigger their activation under certain conditions (e.g., defeating a monster in the center row or acquiring a construct this turn) whereas some monsters give you a keystone after being defeated. When a keystone is activated, it follows a kind of decision tree as to what it provides. If you do not have the corresponding life or death temple, gain it, either by snatching it from an opponent or taking it from the board if it hasnâ€™t yet been acquired. If you do have the life or death temple already, then the keystone will allow you to use the templeâ€™s ability. Life provides you with two money and Death allows you to banish a card in your hand or discard pile. Additionally, you also get to grab the Temple of Immortality. Worth 10 points instead of just the measly 5 that the other temples provide, the Temple of Immortality reintroduces the Rally effect from Dawn of Champions. Once per turn, you choose a faction. When you acquire or defeat a card of that faction, if the next card that enters the center row is the same faction, then you get it for free. This isnâ€™t always useful (and is easy to forget to even use), but given the whopping 10 points that the temple provides, it probably shouldnâ€™t have too powerful of an effect anyway.

I know which temple Iâ€™d prefer to worship at.

Throughout the game, temples are a hot potato, bouncing back and forth among players. Unless, of course, you canâ€™t get a keystone. Though I like the vying for control of the temples, my problem is that youâ€™re beholden to the flip of the cards for keystones. Sometimes, those cards just donâ€™t come up. When they do, itâ€™s likely your opponent will swoop in and grab it before it can come back around to you. I generally love the competition for acquiring and defeating cards in the center row, but the limited availability, and even ability, to get keystones sours things. Since temples can cause up to a 20-point swing in one playerâ€™s favor, you obviously canâ€™t ignore keystones. However, the unreliability in obtaining them is sometimes too big of a hurdle to get over. Games when the temples jump from player to player showcase the fun of this tug-of-war, but keystones need to be more reliable if they are going to play such a large role in the set.

Other than keystones, cards offer two new abilities. Echo is actually a spin on the unite effect, typically seen with Lifebound cards, but now only with Void. Instead of a bonus going off when you play two cards of the same faction, a card with echo unites with a card in your discard pile. So that Void hero you bought last round who is waiting on the bench? He may actually trigger your Echo ability to go off in your next hand. Iâ€™d love to have seen more cards with Echo on them, both in terms of number and faction variety. I hope itâ€™s something that will return in future sets.

Echo. Void. Iâ€™m sure my 15-year-old self could come up with a profound connection here.

The second ability, Serenity, is a little less interesting. This effect goes off when your discard pile is empty. Obviously, this relies on the cards getting shuffled just in the right way to work for you. Itâ€™s nice when it does, but itâ€™s hard to be too disappointed when they donâ€™t since theyâ€™re only cheap 1-cost cards. Like the Echo ability, Iâ€™d like to have seen Serenity effects be more common and not only on Enlightened cards.

Serenity is the path to enlightenment unless you draw this card when your discard is full.

Lastly, a handful of cards in the deck have a lightning border, indicating that they have an effect while in the center row. For the two monsters, the cost to defeat them is reduced based on how many temples you control. For the one hero, you can place it directly in your hand when you buy it if youâ€™ve already played a Lifebound hero this turn. And for the one construct, you can spend attack in addition to money to acquire it. Like the Echo ability cards, Iâ€™d have liked to have seen more of these. The tweaks to card abilities and effects are what makes the game exciting, far more so than adding some other element (i.e., temples) to the game.

Lightning only strikes six times at most.

Overall, Ascension: Valley of the Ancients is a middling set that isnâ€™t going to be high on the wishlists of people who arenâ€™t completionists. The setâ€™s most redeeming quality is that itâ€™s non-offensive. Many of the cards are unexciting. Oddly, the cards donâ€™t even seem to have a lot of synergy, which is a bummer in a game that is often about making whopping combos. Your deck quickly becomes bloated as you try to create some kind of engine that will work to get those temples. Moreover, since many cards, like the mechanic constructs, rely on you controlling temples to trigger, this makes getting things running even harder given the aforementioned issues of wrestling control of temples away from your opponents. Perhaps weâ€™re finally reaching a point â€“ and I hate to say it â€“ where thereâ€™s enough Ascension sets out there, making Valley of the Ancients feel a bit tired. Instead of new and flashy, Iâ€™d like to see at return of previously introduced mechanics in a fresh set. For now, Valley of the Ancients doesnâ€™t fit the bill.