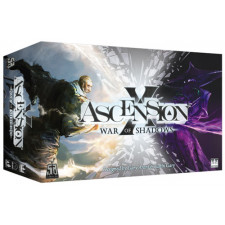 Ascension was one of the first in the glut of deckbuilding games that came out after Dominionâ€™s successful release. Few of those games managed to set themselves apart and eventually fell into the annals of gaming history. However, with its funky pencil-sketch-looking artwork (which is actually a style called scratchboard) Ascension told you it wasnâ€™t just some Dominion clone; this game had its own identity. First, there is a center row where cards came out randomly instead of in a set number of piles, there are two currencies â€“ runes (money) and power (attack), and some cards â€“ constructs â€“ stayed out giving you permanent effects. This new system of deckbuilding gave way to numerous Ascension sets over the past six years of which the latest is Ascension X: War of Shadows. This is the tenth (hence the X) release in the series. 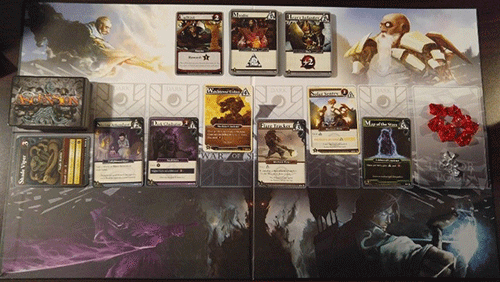 With each new Ascension set, something new and unique is added to the game. Over the course of the years, weâ€™ve seen fate effects, events, soul shards, treasures, multi-faction cards, champions, and insight. Stoneblade, Ascensionâ€™s publisher, has given us a lot! Itâ€™s hard to believe they could come up with anything new, yet they did. Ascension X: War of Shadows adds two new mechanisms: dual cost cards and day/night effects. The former is just like it sounds. Some cards now have a dual cost meaning you must pay in both runes and power. This means that a strategy of going heavy money or heavy attack might not work out so well this time for acquiring cards from the center row. This gives you more to think about in regard to what kinds of cards youâ€™re grabbing and how to spend your resources in a given turn.

Day/night effects work as follows: each card in the center row is either a day card or a night card. This is clearly noted by the colored border around the card as well as a symbol on it. On the board, if a card is a day card, you push it up a little in the center row and if it is a night card, you pull it down a bit. If there are more day cards than night, then itâ€™s day; if there are more night cards than day, then itâ€™s night. Certain cards have bonus effects that occur only during the day or night time. This means you need to pay attention to timing when you approach the center row. A card that might give you two extra runes during the day should be used first, while itâ€™s still day, because as soon as another card refills the row, it may no longer stay day (when there are equal day and night cards, itâ€™s neither day nor night) and depending on how many cards you pull from the center, it may even turn to night. Moreover, you may have a day-heavy deck, meaning you canâ€™t do much if itâ€™s night out, limiting those awesome combo-crazy turns that Ascension is known for. So the decision as to how you want to build your deck is, per usual, up to you.

Now, letâ€™s address that big olâ€™ complaining elephant in the room: Ascension can be random. I donâ€™t think anyone can contest this. It can be very frustrating to some people and immediately turns them off to the game. In fact, back when I played the first set of Ascension, I was ready to burn my copy. However, after giving it another try some years later, I came to realize that one of the great things about Ascension is that despite its randomness, itâ€™s a game that really rewards you for multiple plays. And Ascension X: War of Shadows is like any other set in that respect. The more you play and become familiar with the cards, the more you can find some control and strategy in that seemingly uncontrollable sea of random. Unlike some of the previous Ascension sets though, Ascension X: War of Shadows seems far less swingy. Although it can feel amazing to have a 10-minute turn that has snowballed into a billion points because of the way the cards flipped, Iâ€™ve also been on the other side of that and it feels awful. Iâ€™ve played Ascension X: War of Shadows quite a bit, and at all player counts (two, three, and four), and there havenâ€™t been any mega turns thus far.

So for those of you who have maybe been spurned by Ascension in the past, I encourage you to give Ascension X: War of Shadows a try. You may still hate the random, but youâ€™ll have to at least give it up to the designers for creating yet another fresh take on the game. And for those of you rabid Ascension fans, my kindred spirits, you wonâ€™t be disappointed. Sure, youâ€™re going to get another big box, which means another board, more gems, and another set of starter decks, but itâ€™s worth it. Donâ€™t just wait for the app update that includes this expansion. Get the hard copy now and play the hell out of it because, if anything, Ascension X: War of Shadows proves again that Ascension has some real staying power.