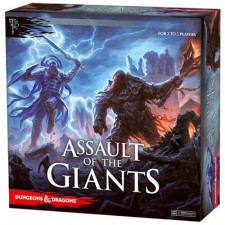 Assault of the Giants Review

Assault of the Giants is the new Dungeons & Dragons-licensed board game from WizKids and designer Andrew Parks. In addition to packing a couple of rather mighty and appropriately sized giant miniatures, it also comes with a pretty decent rules set that manages to push the Dudes on a Map (DoaM) innovation ball forward a little with a couple of unusually smart ideas. There is a lot I really like about this game and it is a good example of one of my favorite genres, but in the final equation my enthusiasm for it is undoubtedly muted.

Let's start with the good stuff, because most of the remainder is pretty standard DoaM fare in line with recent titles such as Chaos in the Old World, Blood Rage, Cthulhu Wars and so on down the line. You move dudes around the map, you roll dice to delete opposing dudes, and get VPs for meeting certain objectives. Then you use resources to make more dudes. It's been like that since Risk, really. 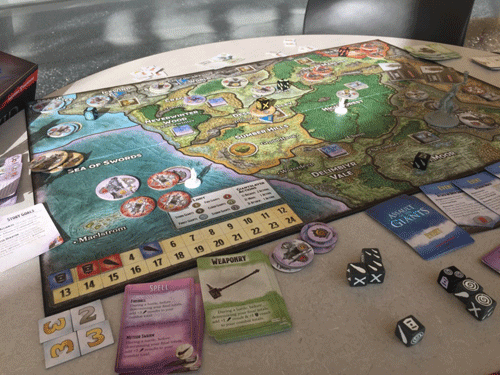 Wait, I thought it was a game about giants...

But the number one eyebrow-raiser is this genius activation system wherein each player has a pile of cards that are played one per turn to designate your action. This alone isn't novel, but the fact that some cards effectively increase in potency when played after other cards is pretty fresh. So you might want to hold off on playing a move or attack card until later in your cycle so that you get +1 action or a combat bonus per card previously played.

This is really cool because it sets up some deeper strategic planning while also establishing a sort of rising and falling tempo for each player. You get stronger, essentially, while your options become reduced. In order to get your cards (and thus your full range of options) back, you have to take a rest action which puts you down for a turn and resets your bonus structure. And it also leads into the second really cool idea.

When you Rest, you get one Giantslayer action per card behind the Rest action card. With these, you move three mutually-controlled Giantslayer figures around the board and attack your opponents. Of course, they might Rest on their next turn and send Hook, Line and Sinker (yes, that's really their names) over to your neck of the woods. We've seen neutral and mutually controlled units in the past, but in Assault of the Giants they are smartly keyed to that reset function- and smartly designed such that they are stronger the longer you wait, thus incentivizing waiting until you are out of options.

The third great idea that veteran designer Andrew Parks stuck in here is an extrapolation of the "different factions, different goals" trope. Again, at first blush there doesn't seem to be anything new with each race of giants having a different agenda (the Frost Giants want the usual eternal winter, Hill Giants want to eat, Fire Giants want to make a big mech, etc.). But where it gets really cool is in how each of the giant races have storyline-driven, narrative quests over the course of the game that must be completely sequentially. These still don't win you the game because it is a VP-based thing, but it gives the whole thing a dynamic structure. It could be argued that they do result in a game that feels a bit on rails, but it's still more free form than the first two or three turns of Axis and Allies.

Now, where it starts to become less compelling is also tied into these objectives because ultimately, they aren't much more than "go to this territory" kinds of things. You might have to have a resource card, which you gain from plundering territories, or you may have to roll dice or something. But at the end it's kind of just fluff. And some of their thunder is stolen by the fact that the game just kind of throws points at you ("Ordning Points") constantly. Every battle, every Giantslayer action, and there are a few public events available that you can claim as well- again, typically the "go to this territory" sorts of things.

Fighting over these territories is also not particularly interesting. It's not a bad system, but it's one geared toward marshalling overwhelming force with a somewhat too-complicated resolution process. I'm also not particularly fond of how the game feels cluttered, almost as if a couple of expansion ideas unusually made their way into a core game product. There are spells, faction-specific combat dice, and those mentioned resource cards all in the mix, and compared to more streamlined games such as Cthulhu Wars or Blood Rage it feels just a touch fat. That said, some may enjoy that this game is somewhat chunkier, resting somewhere between the complexity level of those titles and something more detailed such as Runewars. 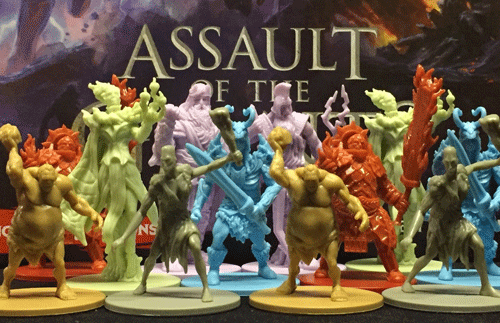 ...oh, there they are. Miniature giants.

The main issue I have with the game is those other games, along with Cyclades, Kemet, Inis, Cry Havoc and any number of similar titles. Since Nexus Ops released 12 years ago, I don't think any genre has gone through more evolution than DoaM and as a result there has been an avalanche of greatness in this space. These days, a game has got to be absolutely top shelf to compete with the classics or the most recent bests. I'm not sure Assault of the Giants quite hits the mark it needs to for fans of the genre that have followed its upward trajectory over the past decade. But I also think that those who are new to these kinds of games or that haven't played through some of the classics might find quite a lot of value here, and this could become a favorite title for them. It should be noted as well that this game plays six players out of the box, which is not common these days for any game of this type- and it plays in a pretty reasonable amount of time with a full table.

In the end, I'm giving Assault of the Giants a mark on better side of our five-point scale but I am doing so knowing that this won't be a game that I keep in my collection or that I will especially seek out to play again. I appreciate Mr. Parks' smart design (and would in fact slate this among his best work to date) and I'm always up for the D&D setting, but I cannot see myself reaching for this game over established favorites. It's a case where experience and genre fatigue might have damned an otherwise above average design.