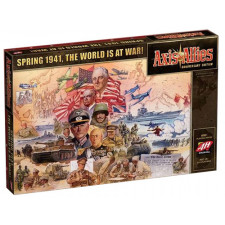 Axis & Allies whisks its players back in time to the early 1980s of game design: a giant, hulking box that reveals hundreds of tiny plastic tanks, planes, warships, and soldiers within, a board that sprawls across your table, buckets of dice, piles of paper money, and a design that eats up your entire afternoon, evening, and maybe even a portion of the next morning.

And in its definitive Anniversary Edition thatâ€™s finally back in print, it is glorious.

Veterans of the series will appreciate the revised ruleset, which hones the gameplay to fix some of the wacky ahistorical outcomes that can crop up. It integrates some of the best ideas of previous versions of the game and tacks on a few of its own, smartly separating the non-essential rules into optional rule sections so you can fine-tune your experience to whatever kind of World War 2 you and your friends want to dive into.

Research & Development is now a less risky proposition, and youâ€™re all but guaranteed to get something for your efforts after a round or two. There are a whopping six types of warships in the box, allowing for some more finesse in naval strategy, and the addition of Italy as a player and China as a kind of sub-player open up some new strategic avenues for both sides. While the classic 1984 version had players fighting for capital cities, Anniversary tasks you with fighting for victory cities, allowing for more subtle play and a more streamline play time. You wonâ€™t have to knock out a couple of players for the game to reach a conclusion.

The map is split into more territories than most of the earlier designs, offering more tactical decisions for how exactly the German player wants to push into Russia or what path the Japanese need to take to distract the U.S. player long enough for her allies to occupy Moscow. Helping the action remain uncluttered is the new, gorgeous board, split into three giant sections that will span four feet of your table easily. World War 2 now feels appropriately gigantic and epic on the tabletop, and you wonâ€™t need to put your soldiers on separate board insets as in some previous versions of the game. 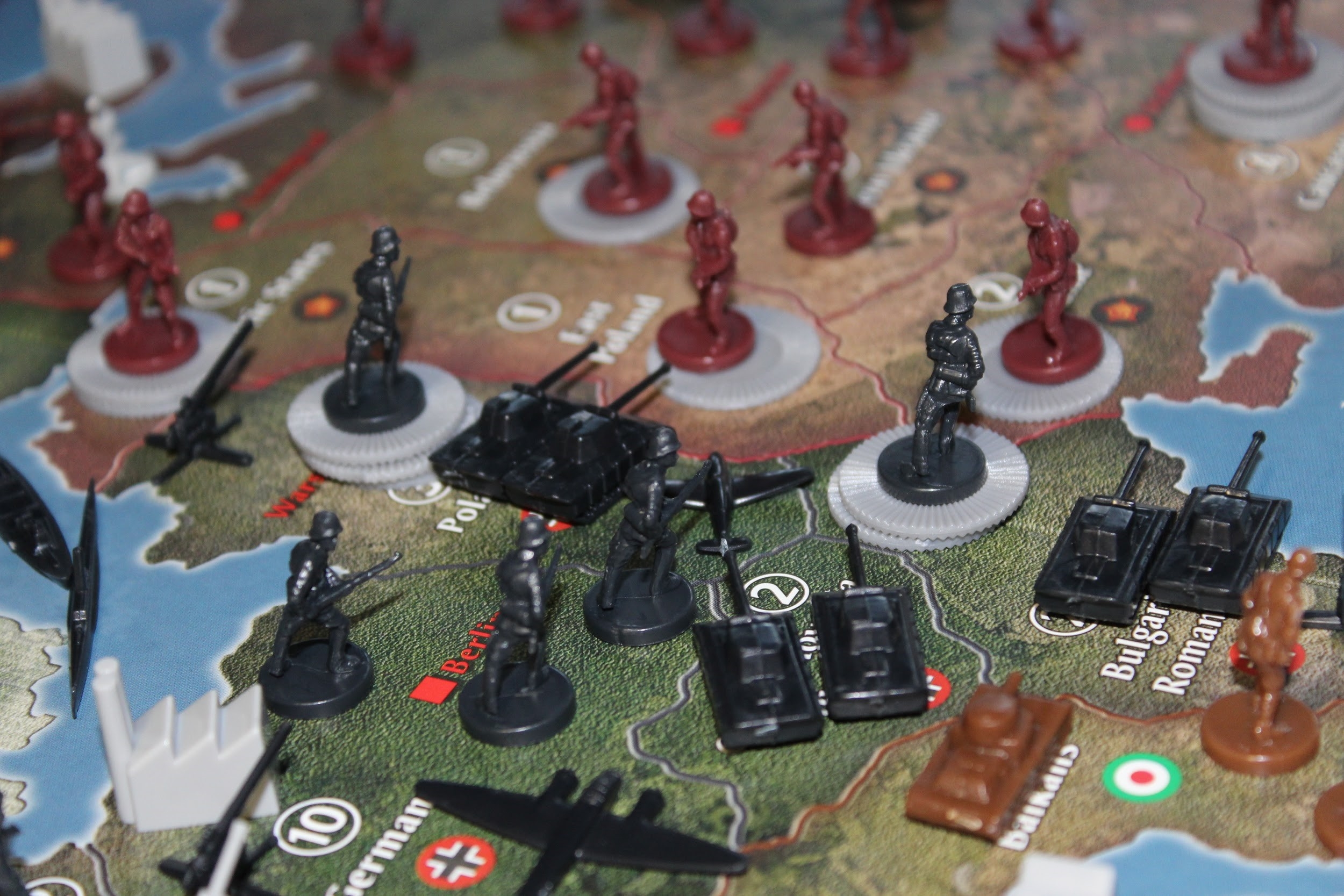 Axis & Allies demands that you work together. It requires the Allied players to come up with a strategy for holding off the Axis advance long enough to get America into the war and occupy Berlin and Tokyo. Meanwhile, the Axis have to press their advantage as long as possible, blitzing through key victory cities in Russia and the Pacific before the Allies know what hit them. This can mean the game ends up being a foregone conclusion after five or six rounds if one sideâ€™s rolling too many sixes or fails to get a strong strategy to come together. But thatâ€™s alright; itâ€™s an easy enough game to throw back in the box until next time, and youâ€™ll still get a glorious four or five hours of World War 2 strategy.

Frankly, Iâ€™m amazed the game even functions at all. Itâ€™s fairly rules-light, a bit of a leap up from Risk but nowhere near most global theatre World War 2 wargames. Thereâ€™s no overwrought combat mechanism, just simple, classic D6 roll-offs. You buy your troops, move your troops, then build your troops, as gamers have been doing for decades. And yet it works beautifully. Youâ€™ll get to experience the desperation of Germany as her troops got within a handful of miles from Moscow but were beaten back. As the Japanese, youâ€™ll get to decide whether or not to hit Pearl Harbor and recreate history or focus your attention on Russia and the UKâ€™s activity to the west. 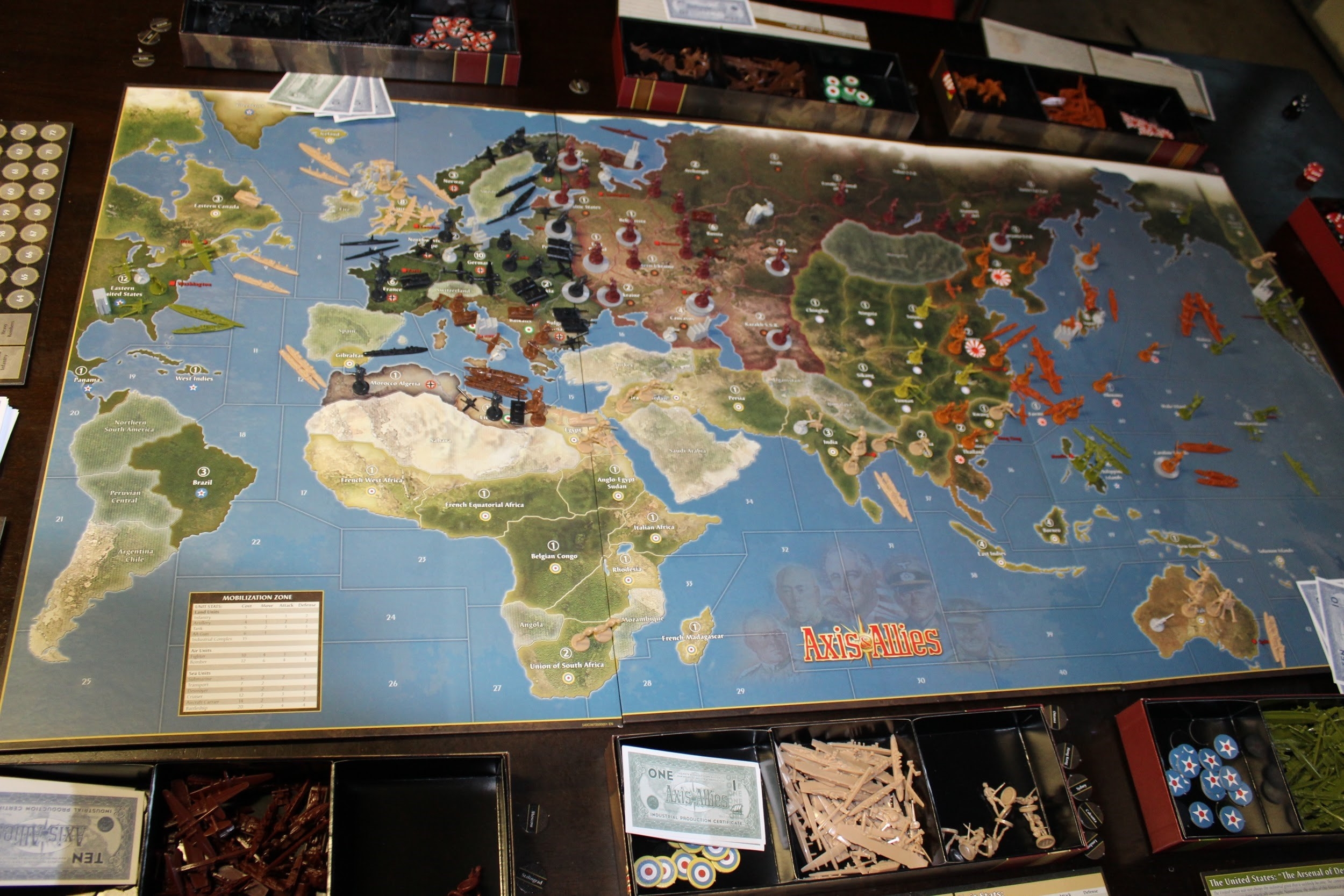 The world at war!

The Churchill player will nibble his fingernails to mere nubs as Germany grows in power and threatens to invade the British Isles, praying your U.S. and Russian alliesâ€”along with your massive Navyâ€”can fend off the threat of Hitler. The U.S.S.R. player will churn out men as bullet fodder, throwing them into the fray on the Eastern Front to slow Hitlerâ€™s Blitzkrieg. And the U.S. player will be tasked with checking Japan in the Pacific, or else focusing on helping Britain gain a foothold in Europe in an alternate-universe Operation Overlord.

Since each side plays so differently, and each game will play out in a unique way, you get seemingly infinite experiences in the game box. You can recreate World War 2 or play out an endless number of â€œwhat-ifâ€ scenarios as you like. Optional rules, two different scenarios, and three different victory conditions you can play to open up tons of possibilities to tailor the game to how your group likes to play.

There really isnâ€™t much to complain about here, but Iâ€™ll mention most of the cardboard is typically thin Hasbro material, and one of my board sections did develop a slight warp pretty quickly. Also, there are so many types of naval units now, and with each side having unique molds, it can take a round to start easily identifying what is what.

But I nitpick: yes, Axis & Allies is long and plodding, yes, itâ€™s moving plastic army men and rolling tons of dice, and yes, itâ€™s wonderful. Axis & Allies: Anniversary Edition is the definitive version of a classic game, and itâ€™s never looked or felt better than this.