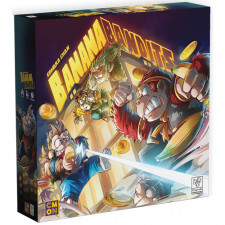 Some games defy my understanding of the publishing process; I wonder at what point the publisher thought that perhaps they actually made a game thatâ€™s designed solely for people that have a solid buzz. Banana Bandits is precisely the kind of game that seems to have been designed for the rowdier crowd, with a setting thatâ€™s as unlikely as one could hope and a theme that is nastiness distilled. Itâ€™s not a dumb game, but itâ€™s certainly a simple one which relies on a thin rule set and heavy, direct interaction to provide the entertainment. In short, itâ€™s fun if you like this kind of game, but you really have to like games like King of Tokyo to like this, I think. 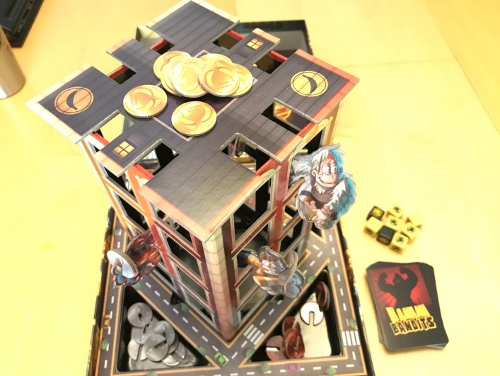 The idea of the game is that four primates are climbing a building which has golden coins on the top, of which players need two to win. To get them, you have to waffle stomp the opposing primates which earns you coins of their color; once you have two coins, you may ascend the building and trade them for golden coins. To aid you in your quest for simian supremacy, there is a massive amount of card play and dice chucking that takes place to resolve battles, give you bonuses, or deny opponents things. The turns are relatively quick, which helps keep people interested, but still, the pacing seems a little slower than Iâ€™d expect from such a â€œfun firstâ€ sort of design.

By and large, this game works really well, but its simplicity can be viewed as a drawback. If youâ€™re playing this with the expectation that it will be the next Spartacus youâ€™d be sadly disappointed, despite this being a game wholly about both blood and treachery. This is a very light game that truly relies upon you going into the experience knowing that youâ€™re going to be doing a lot of hooting and hollering, rolling dice dozens of times, and probably cursing a lot. This is the kind of game that I like, and I do like this fairly well, although I wish there was a little more to it than what it delivers. The real action comes from the card play, though, and that is executed brilliantly with a large deck of dissimilar cards which do a wide variety of things. A lot of your strategizing will revolve around when and on whom to play your cards, or when to bide your time. 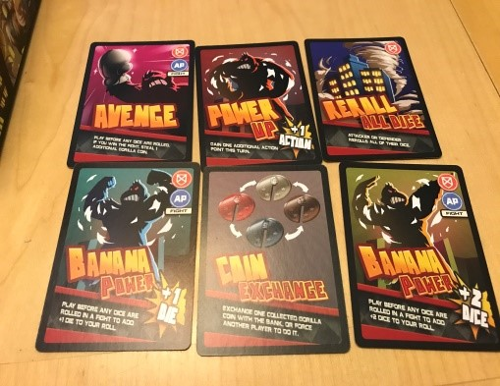 What aids in the enjoyment of this game is that itâ€™s a 3D, full standing building that playersâ€™ anthropomorphic apes climb. The art is really fun, and delivers the feeling of a lighthearted Donkey Kong feel, which helps enhance the overall experience. The entire production is really slick, with thick, durable bits and a blow-molded tray which serves as both a smartly designed, segmented tray to hold all of the tokens as well as for a frame with which to stabilize the tower. The really great thing is that this game takes maybe two minutes to set up, from soup to nuts, and the insert design does wonders toward that aim. 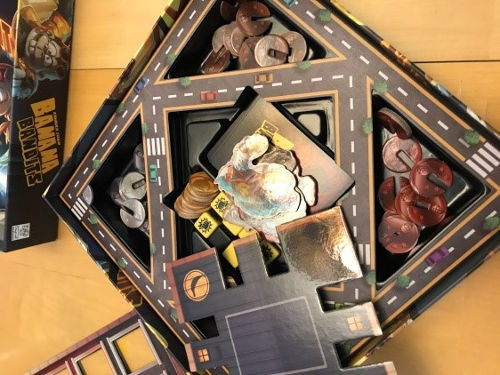 The only thing not in the box, though, is good bourbon. This game does, indeed, benefit from a few adult beverages in that the level of fun is proportionate to the level of hyperbole and/or smugness delivered to your opponents after a lucky roll, perfectly timed card, or quick move just out of range of an opponent. This game embraces the idea that lighthearted trash talk is an exceptionally fun endeavor among friends and while this game was really fun for my kids, who are trash talkers during games like their old man, it was exponentially more fun when I brought this out at my friendâ€™s Labor Day barbecue and we had half-in-the-bag players putting dozens of miles on their mouths running them gums. That particular encounter is what solidified in my mind the idea that this game not only has a market but was designed specifically, and artfully, to deliver a specific kind of experience to that market.

When all is said and done, I like the game and my family likes the game, although for completely different reasons. Itâ€™s so accessible that itâ€™s the kind of game that a nine year old can learn it and play it well, but itâ€™s also nasty enough that they can avenge their weekend of forced servitude by unceremoniously tossing their fatherâ€™s primate off of the side of a building, stealing a coin along the way. This game isnâ€™t going to impress hard-core gamers who are looking for a grand strategy game, but it will absolutely embellish a night of drinking and gaming with some game-head friends.