Itâ€™s very difficult to get a squad-level wargame off the ground. If youâ€™re trying to appeal to those already engrossed with the niche-within-a-niche genre, youâ€™re going to be competing with systems that have hundreds or even thousands of scenarios covering every battle in the footnotes of whatever war the system is attempting to simulate. On the other hand, if youâ€™re trying to wrangle in non-wargamers, youâ€™ll need to design a system thatâ€™s at once accessible and plausibly accurate to the conflict.

Band of Brothers as a system has always been easy for non-wargamers to pick up, but its major shortfall was that it â€œonlyâ€ offered a few dozen scenariosâ€”not enough to pry committed grognards away from the likes of Advanced Squad Leader or Combat Commander.

Now, with the release of the deluxe editions of Screaming Eagles and Ghost Panzer, coupled with the introduction of the non-standalone Texas Arrows expansion, weâ€™ve got ourselves an honest-to-goodness system. There are enough units and newly mounted hard game boards here to keep any wargamer busy indefinitely, and do-it-yourself squad and scenario building is a real possibility now. While previous editions of Band of Brothers games felt like a five-star game in a three-star package, the production value of the newly remastered sets now makes this stand head and shoulders next to the best systems out there.

If I do have any complaint here, itâ€™s that setup and organization is going to take some know-how if you dive into the series with all three sets, and Iâ€™d almost recommend that potential converts dip their toes in the water with the revised edition of Screaming Eagles before jumping right into the deep end for this very reason. 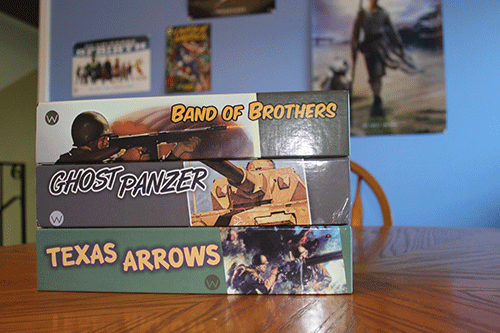 The European theater in all its glory!

The mechanisms are still top-notch, emphasizing realistic period tactics with the gameâ€™s innovative suppression system. If you attempt to take a position by either hiding in your foxholes and firing thousands of rounds of ammo or just brazenly rushing across an empty street or open field, youâ€™re going to lose, and your men are probably going to die. But if you manage to identify your foe underneath their concealment, get their heads down with some covering fire, and carefully move into take their position, youâ€™ll do much, much better.

The unifying theme of Band of Brothers is the uncertainty of its command and control systems. You may not know where exactly where your opponent is thanks to conceal and decoy counters. You wonâ€™t know whether or not your units will activate when called upon thanks to the unique suppression and morale activation mechanism. You wonâ€™t even know if your opponent can fire back as you rush his position. It feels right for stepping into the boots of a squad leader: radio out to the squads and pray that everything works out okay, but never count on anything being certain as soon as bullets start flying.

The scenarios are intense, with most of them going down to the last, tense few moves as you attempt to claim a hill or defend a town to the very last man. I canâ€™t count the number of times Iâ€™ve played a Band of Brothers game and literally lost the scenario by just one or two hexes, falling just shy of my objective. Battles across claustrophobic town streets are gritty and blood-soaked, and massive waves of armor rumbling across forests are equally deadly and epic.

Itâ€™s all very natural, with the very best rules-to-realism ratio in all of wargaming, no exaggeration. Weâ€™re talking just six or seven pages of rules in order to get you going on the first few scenarios, and several more to take the training wheels off with further details like tanks and the big guns. But make no mistake: itâ€™s still a very detailed system compared with introductory wargames like Memoir 44 or the rest of the Commands & Colors series, and with some of the rules introduced in Ghost Panzer and Texas Arrows, now has enough granularity and detail to please hardcore grognards and ASL buffs. 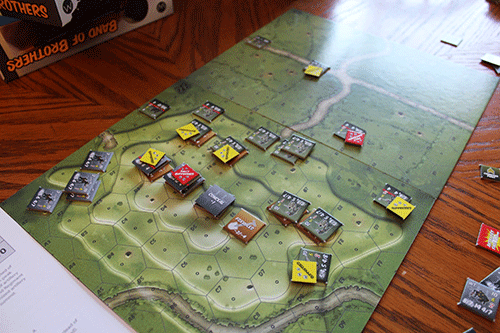 American units trudge through rocky terrain to take a hill under the support of artillery fire.

The new scenarios on offer in Texas Arrows are some of the best to grace the game system. The American unitâ€™s â€œreluctanceâ€ stat may seem like a small thing, but it makes a huge difference in how much ground the Americans can cover while attempting to retake Italy. Since these units stop at the first sign of resistance and canâ€™t move until the next turn, the US player has to be very careful to advance quickly enough to win a given scenario.

If nothing else, the remastered editions of the first two entries in the Band of Brothers system along with the new material in Texas Arrows have once and for all proven the systemâ€™s viability and adaptability. Iâ€™m convinced this system is one of the only squad systems to effectively communicate genuine World War II period tactics, without silly gamey tactics or hundreds of pages of rules. Itâ€™s a ballet of bullets, armor, blood, and sweat, whirling around until one side is left standing. Itâ€™s one of the best wargames available on the market today.