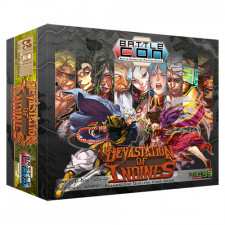 One-on-One fighting games, like Street Fighter, Tekken, and Mortal Kombat, are popular in the video game world for a host of reasons. BattleCON attempts to take that same experience and recreate it on your tabletop. The reason that it succeeds is because it doesnâ€™t focus on the twitch reflexes necessary to play fighting video games at a high level (nor could it, given the format). Instead, it focuses on the strategy behind the game and, in doing so, creates an undeniably amazing experience.

Devastation brings thirty unique fighters to the BattleCON system. Each fighter plays completely differently and, for the most part, are of roughly equal power. They are broken into six â€œtypesâ€ of fighters (counter attacker, specialist, brawler, etc.), but those categories are exceedingly loose. For ease of learning, they are also divided into five â€œflightsâ€ of complexity. However, a more complex character isnâ€™t more powerful than a less complex character. Itâ€™s just a warning system so that new players donâ€™t jump into the most complex characters and walk away scratching their heads.

Both players get five identical bases. Things like Strike, Shot, or Drive. The bases provide stats such as range or damage as well as little bonuses like stun guard or soak. Then each character comes with five unique styles as well as a unique base. So one character might have styles like Vengeful or Wrathful.

On each turn, players simultaneously choose a style and base to combine. So I might try a Wrathful Shot or a Vengeful Strike. They are revealed simultaneously. The one with the quicker pair goes first and has it take effect. If it damages the other player, then that player is stunned and cannot attack back. That base/style pair is then discarded into a discard pile. The pair in that discard pile is moved to a second discard pile, and the pair in the second discard pile is picked up into your hand. In that way, you can only use any given card once every two turns.

Characters also have special abilities they can use. Shekthur can use tokens to add to her priority while Pendros can change the terrain to his advantage. The result is that every fight is a wholly unique experience â€“ even when using the same characters. A game lasts 15 turns or until one fighter loses 20 life. In a tournament setting, there is a draft of characters and each player ends up with three. Then, each player strikes one of the three from his opponent â€“ picks one they canâ€™t use. Of the remaining two, they secretly decide which they will play and then simultaneously reveal.

BattleCON is an amazing game system. The simplicity of the rules means that anyone can pick it up and play. Simply match a base with a style and youâ€™re on your way to a good time. But though the system is simple, the gameplay is astonishingly deep. Both you and your opponent have twelve different style/base combinations you can play on each turn (not counting the pairs in your discard). So you have to think about what your opponent might play, and react to that.

And it isnâ€™t just about card pairs. BattleCON features a board with seven spaces. Positioning and range are extremely important. Some characters like to stay at range and lob bombs. Others want to be as close as possible. Knowing how to move your character â€“ and moving in a way that stymies your opponent â€“ is a key skill to BattleCON proficiency.

Best of all, BattleCON doesnâ€™t require you to memorize every card of every character in order to play effectively. Frankly, given the number of fighters, that would be a herculean task for all but the most dedicated players. Each fighter comes with small reference card listing each of their unique styles and base. It is given to the opponent so that the opponent knows what potential abilities you have available to you.

And, once the basic game is mastered, the fighters can power up with special abilities. A special card allows you to Pulse, Cancel, or use a Finisher. Pulse and Cancel are both ways to disrupt an opponentâ€™s attack or rearrange the battlefield. But the Finisher is a fantastic addition. Itâ€™s a special attack, often the most powerful available to a fighter. But it can only be used when the fighter is low on health. In that way, it represents a desperate comeback to finish off the opponent- especially a weakened one. Not only is this a strategic addition providing more strategy and tactical value of the game, but it is also highly reminiscent of the video games from which BattleCON draws inspiration.

BattleCON lends itself to one-on-one tournament games. The system and the style ooze competitiveness. But Devastation brings other modes as well. Two-on-two team games, all-on-one, boss battles, and even cooperative modes are available. And the surprising thing is that these additional modes do not feel shoehorned into a competitive game. Itâ€™s a credit to the BattleCON system that it can readily accommodate all these modes of gameplay.

With thirty unique fighters, Devastation has untold hours of gameplay in the box. Mastering even one character can take numerous plays. The system is so wonderfully simple to explain, but so unbelievably full of potential and strategy, that it represents a staggering achievement in modern gaming â€“ even among tournament games. If you enjoy the competitive, tournament-style games, then BattleCON is a must try. The system is flexible, innovate, easily grasped, and deviously deep.