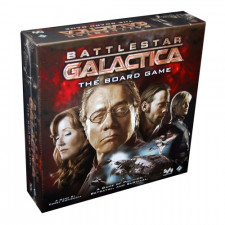 Social deduction games are so hot right now. You've probably played one recently. Games like Coup, The Resistance, One Night Ultimate Werewolf and Spyfall are different species of the same genus, defined by common traits like bluffing, paranoia, hidden roles, and most importantly, the ability to lift the focus up off the table and onto the desperate poker faces of the people around it.

In that taxonomy, Battlestar Galactica: The Board Game represents a distant, isolated branch. While it manifests all the traits listed above, it differs in one key respect: the other games listed are quick and light, ideal for impromptu gatherings. BSG is an event, the kind of game you have to mark on your calendar. It takes the elements of a deduction game and blows them up into a three to five hour space epic complete with do-or-die crises, space dogfights and struggles for political office with some time for personal relationships to develop and sour in between. For lack of a better description, it's social deduction for core gamers, the kinds of people who spend hours lost in Twilight Imperium or Arkham Horror.

Yes, it's based on a TV show: the drama-laden SyFy reboot, not the quirky 1970s original. Don't worry if you haven't seen the show; watching the series isn't a prerequisite to enjoy the game, nor will playing the game spoil anything about the series (as long as you leave out the expansions).

Knowing the show's premise, on the other hand, is crucial to understanding the game's magic. In a distant time, around a distant star system, humanity has fracked up big time. They've created a race of sentient machines called Cylons, and if you've seen Terminator, you know what happens next. The humans won the First Cylon War and exiled the toasters, but in isolation, the machines evolved. Now, wearing organic bodies indistinguishable from real human flesh, the Cylons have returned, silently infiltrating all ranks of society before blowing everything to hell. All that's left of the human race is a small fleet of civilian starships protected by a lone battlestar. Pursued by the militarily superior Cylon fleet, infiltrated by covert Cylon agents, these last remnants of humanity are on a cosmic Exodus to the mythical planet Earth.

The board game plays out that journey, or at least a season's worth. In an ideal game, you'll have three players batting for the human team and two sneaky Cylonsâ€”but nobody, not even your own teammates, knows your true loyalty. Those numbers vary at other player counts, but the other group sizes are so inferior to the 5-player game that you shouldn't even bother learning how to set them up.

The human goal is to reach their objective, the planet Kobol. The Cylon goal is to end the game before that happens, either by draining one of the humans' four resources (food, fuel, morale, and population), by letting a Cylon boarding party reach the bridge, or by crippling Galactica with structural damage. They can do this by revealing themselves, gaining access to the Cylon side of the board, which is filled with all sorts of nasty ways to attack the humans directly. But the fun and strategy of the game is knowing when to switch, how much you can weaken the humans from within without tipping your hand.

Your first game as a Cylon, you'll play the obvious strategy: undermine the team's skill checks, a once-per-round process where players secretly add cards to a pool in an attempt to reach or exceed a target value to overcome a crisis. This is a bold tactic, though: make one mistake, play too many cards of one color, and the bloodhounds of the group will sniff you out before you can do any real damage. Over time, more subtle Cylon strategies reveal themselves: sowing suspicion, engineering distractions, or playing your turns too recklessly, putting too much effort into trivial problems so that you can honestly say you're out of options when the big Crisis hits. If nothing else, the mere presence of a hidden traitor will prevent the humans from fully trusting one another, which weakens the entire team.

While games like Coup attempt to strip deduction down to its barest essence, BSG tries to distract players with a crazy quilt of game mechanics. You've got Cylon armadas popping onto the board, trying to destroy civilian ships; you've got boarding parties that need to be shot down; you've got the special powers (and handicaps) tied to each character, which are cleverly designed to benefit a human or a cylon player equally.

Most importantly, you've got the titles. At the game's start, one player will be named Admiral and another will be made President. Both of these offices confer significant responsibilities: many cards will ask either the President or the Admiral to make a decision, and that player alone gets the final word. In addition, the Admiral picks the fleet's destination each time they jump, and the President holds a hand of special Quorum cards that can do things like, say, assign a successor or move another player to or from the brig. Oh, and did I mention the Admiral controls the last two nuclear warheads in the human fleet? If you suspect the players may be abusing their power, there are ways to shift the balance of powerâ€”but they cost resources. The longer the humans squabble over office, the closer the Cylons come to victory.

Even with its TV license stripped away, BSG would be a great game. However, it's a great game, in large part, because it's such a perfect adaptation of the show. It captures all those elements that turned Battlestar Galactica into the pinnacle of sci-fi television: the paired themes of paranoia and trust, power and frailty, ethics and survival. Like the show, it recognizes three things. 1) Sometimes, your best friend will stab you in the back. 2) When your back's against the wall, you've got to make the choices no-one wants to make. 3) In the middle of a moral war with no foreseeable victors, 1 and 2 look exactly the same.`