I consider myself to be one of the biggest fans of â€œBeasty Barâ€ in the observable universe. A year later, we still play this game at least once a week, and I absolutely never get tired of playing it. Well, I was one of the fortunate few to have a friend who went to the Essen game fair pick me up a copy, and so Iâ€™ve had this for quite a while, and Iâ€™ve played with it quite a bit. While itâ€™s a nice expansion, and can really be played by itself if you wished, weâ€™ve found that randomly mixing each playerâ€™s 24-card individual decks and then drawing 12 is the way to go. You end up with each player having a mixed deck of cards, and having to think on the fly a lot more often than they do with just the basic deck or a pre-drafted deck. The really good news is that the whole lot truly adds things to the game that weâ€™ve always kind of known we wanted.

The first thing we knew we wanted and that we now have are reversible entry and â€œThatâ€™s Itâ€ cards. With the old deck, if the Seal comes out, you physically have to swap the cards, which was kind of a pain. Now, you simply flip the cards upside down and they swap places! If this were a Guinness advert, Iâ€™d yell â€œBRILLIANTâ€. Besides that much-needed improvement, the new cards require another few rule changes thanks to the inclusion of the Vulture, which allows beasts that had been previously ejected from line to rejoin. First, you now place all cards face-up in the dead critter pile, which facilitates use of the Vulture. More importantly, when your Rhino runs through a crowd of four animals, bowling them all over into the rejection pile, that player gets to choose the order in which theyâ€™re all sent away. That makes that Vulture even more powerful, because you now have control of that pile. 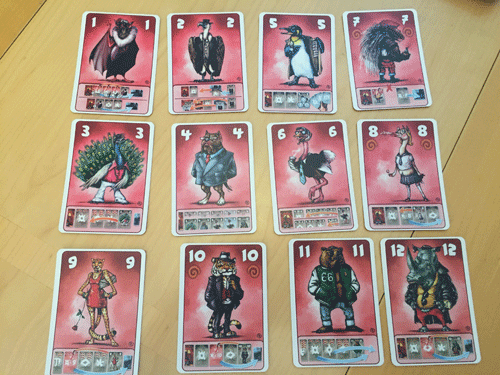 Beyond that, thereâ€™s a ton of completely new powers that we always wished weâ€™d have had access to and some we never even considered. Much of the new deck has to do with replacing cards instead of simply ejecting them. For instance, the Zebra used to stand and block the stronger animals, being the cool greaser he is, and now thereâ€™s a Porcupine which not only blocks the line, it causes stronger attackers to be ejected. The carnivores literally get pwned when they try to start some trouble. Thereâ€™s also a new sorting card, the Dog, which causes the line to be re-ordered from weakest to strongest, making the lowly Monkey and Parrot more relevant and offsetting the strength of the Hippo and Lion. The new Tiger card doesnâ€™t just eat the beast in front of it - it pounces onto whichever beast is unlucky enough to be two cards ahead.

What makes this expansion so great is that it doesnâ€™t really reinvent the wheel as much as turn that hard, plastic Hot Wheel tire into a diamond-studded tank tread. The balancing is astoundingly good, so if you end up with a player who tries the â€œmeatheadâ€ approach to the line by drafting lots of high-powered cards, these new cards make the lower-tiered and middling cards more relevant and useful. I always thought that the Skunkâ€™s ability to knock the two highest-powered cards out of line was a bit much, and the Vulture takes some of the sting out of it. The Llama, a middling card herself, knocks the beast in front of her to the back of the line, for another example, irrespective of its strength. What this allows are complex combinations to emerge where you can use a more attack-oriented card and a blocker card in rapid succession to own the front of the line. This new deck is very diverse, which is a great addition, but it also takes a moment to learn the rules, since theyâ€™re slightly more complicated.

At the end of the day, itâ€™s a great expansion for an already phenomenally fun game, and the small price of learning more complex beasts is far outweighed by the diversity and fun they bring to the game. If thereâ€™s any real drawback, I canâ€™t see it, to be completely honest; I view this expansion as a must-have addition for existing players, and something to look forward to for new players. As a stand-alone, though, Iâ€™m still on the fence as to whether I like it as much as its predecessor. I think it does a fine job all on its own, and the balancing is perfect, so if this was your first go with the game I think youâ€™d have a great time with it. That said, the ultimate version of Beasty Bar, in my mind, is the one that contains both sets, because some of these cards are way too much fun to play without.