I was one of the very lucky ones to have a friend at Essen last year who was willing to buy things for me and bring them back. On the top of my list last year was Beasty Bar for no other reason than I liked the artwork and setting. As a former night-club guy, I could totally relate to the velvet ropes, self-important bouncers who would hold IDs at odd angles trying to find a reason to prohibit your entrance, and worst of all, standing in line for an hour whilst watching nubile vixens walk past my party and enter unfettered. Iâ€™m pleased to report that this game absolutely nails the theme and setting of the night club sceneâ€™s lines, and does so in the most charming and scathingly satirical way possible.

The main idea of the game is simple in that it requires you to get as many of your cards onto the â€œin pileâ€ as possible before everyone runs out of cards. This is done by placing a card in line, resolving the powers of your card and all other cards in the five-space tableau, and then drawing a new replacement card. Where the fun comes in is that each of the perfectly illustrated cards depicts an animal, and each species has its own perk which changes the position of the critters in line. At the end of a playerâ€™s turn, if there are five remaining animals in line the two closest to the door enter the club past the bouncer, who is aptly depicted as a gorilla, and the last one in line is removed from the game. Or, as depicted on the reject card, dumped into the alley with the trash. It is such a robust and entertaining system- itâ€™s the kind of filler game that you really canâ€™t help but play two or three times in a row. 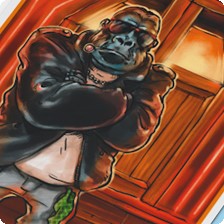 What makes this game special is that itâ€™s inherently accessible, but there are strategic choices abound. There are a lot of things going on, with twelve very unique species which do wildly different things when played and many who have persistent effects while theyâ€™re in play. Itâ€™s such a truly succinct design. Despite all of these possible permutations of effects in play simultaneously, each turn lasts around fifteen seconds, and thatâ€™s for the slow ones. The first few times I played it the entire table was laughing wildly just looking at the depictions of the animals, dressed in party regalia, and at the realization that many of these characters were actually accurate depictions of people we knew. I love that the art is so truly evocative, but also, itâ€™s really entertaining. My kids adore the game, probably because of the â€œfart bubblesâ€ delivered via the skunk, and the clearly-visible rectum of the monkey. The artwork is both perfect for the theme and absurd all at once, and I surely wish more publishers could pair the art with the subject as cleverly as Zoch did with this game.

Itâ€™s worth mentioning that Iâ€™ve played this game well over a hundred times, and because I donâ€™t believe in sleeves, my cards look like theyâ€™ve been played with, and a whole lot at that. This is a testament to the gameâ€™s staying power, because any game that can be played over a hundred times is definitely worth the price of admission. It certainly has an addictive quality in its simplicity; you donâ€™t have to think too hard, but there are so many possible strategies that you canâ€™t just blindly toss cards down, either. There are two victory conditions with which to play as well; with the first, you simply count the number of cards that have gotten into the bar to determine the winner, and with the second, each species has a value, and the combined value of the admitted cards determines the winner. Thus, if you want to play with the kids, you can have a great time simply trying to get into the club, but with your adult friends, you can play the more advanced rules and that opens up an entirely new way of looking at the game, as well as far more strategic choices. 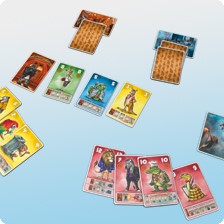 As you can tell from the rather gushing review, I love this game. Itâ€™s not so novel or genre-defining that itâ€™s what Iâ€™d call a five star game, but what it does, it does inconceivably well, delivering five star fun every time Iâ€™ve played it. Iâ€™ve actually had that same friend send me the expansion, which he got from a European friend, and as soon as it hits the States, American gamers will have twelve more creatures to mix and match into their pool of cards. Spoiler Alert: The expansion rocks too.