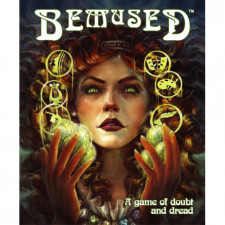 The games of Jim Felli present a particular challenge to the game reviewer. We see a lot of different games cover the same basic ideas ad infinitum, so when a designer like Felli comes along, whose three designs have all been strange beasts, it’s easy to latch onto their uniqueness while ignoring some of their shaggier elements. Both of Felli’s previous games, Shadows of Malice and Zimby Mojo, were striking experiences, and I stand by my rapturous reviews of both. But I also admit that they won’t work for everyone. They were long games with lots of little rules that were easy to forget. More than that, they really require the player to meet the game where it already is. If you can’t deal with dicey abstract storytelling of Shadows of Malice, or the chaotic strategy of Zimby Mojo, both games offer very little for you.

Bemused, Felli’s newest design, is both like and unlike those previous games. Like its predecessors, it defies comparison with other titles. It’s kind of a negotiation game, kind of a hidden role game, and kind of about nuanced card play, except it’s not really any of those things all the way. Like Felli’s other games it requires a few plays and an open mind to really figure out what you think. But unlike those other two games, Bemused is short and focused. It asks a lot from the player, but it’s the first time Felli has released a game that makes it easy for the player to put in the necessary effort. 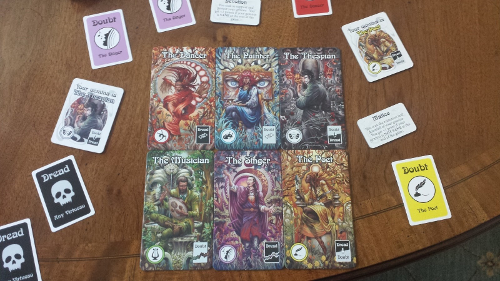 The thematic setup for the game is like nothing else. The players all play the role of muses who inspire a specific virtuoso in some art form, like painting or dance. Throughout the games, the players will work to sow doubt and dread on the other muses so that their own muse will stand out. This is expressed by cards that represent doubt and dread. Once a player has five of them played on their virtuoso, that virtuoso goes insane, limiting the player’s options on their turn. If three of those five cards are dread, the virtuoso dies and must play out the rest of the game as a phantasma, a disembodied spirit who is able to churn out dread to the other players.

Layered on all of this is something called a gemina. Each virtuoso has one, and it represents another virtuoso to whom they are spiritually connected. Geminas begin the game hidden from the other players, but they are revealed when a virtuoso goes insane, or they can be revealed willingly. Each virtuoso also has a secret goal associated with their gemina. Maybe they hate their gemina and want them dead by the end of the game. Maybe they want to ensure that their gemina remains sane for the whole game. This is where the hidden roles part comes into the game, although it’s more complicated than that. That’s because each virtuoso has their own power, and if your gemina is revealed you can use their power as well.

All of this combines into a bizarre experience. If a game quacks like a duck, you expect it to be a duck, and that’s perfectly reasonable. Bemused quacks like a duck, but it’s probably something closer to a platypus. There are a lot of games to which Bemused bears a passing resemblance, and many players will take a crack at this game and be disappointed as a result. If you want to play it as a hidden role game, it will look thin and obvious. But the real key is in the momentary deals and alliances that will spring up throughout the game. Bemused is an extremely social game, but if you play like straight negotiation you might be disappointed by how your own actions are constrained by your hand of cards. So it might be best to think of the game as a little bit of all these things, where the hidden goals of players, their secret information, and their flaky humanity all combine into a swirl of deal-making, lies, sneaky card-play, and temporary alliances.

When everything is humming, Bemused is an intoxicating game. It embraces the human element to potent effect. It’s such a social game in fact that strategically speaking it can be a little opaque. It’s tempting to think of the game as a big social car-wreck, because that’s sure how it looks when you play it. My plays have become progressively more raucous and devious as we become more familiar with it. With some experience it becomes obvious that this is a game that rewards observation of the other players. One has to make enemies, but you also need to keep your head down to avoid being targeted. If I could compare it to any other game, it would be to Cosmic Encounter. There are some differences of course. Cosmic Encounter has some structural choices that make deals arise organically, whereas Bemused has to encourage players to make deals in a section of the rules giving strategic advice. Cosmic Encounter is also a much more chaotic game, to the extent that one could make the case that chaos is the central design element. Bemused is more staid than that, choosing to rely on secret information rather than bizarre events. But both games force the player to play with heads up, to read the table and pay attention to how the social winds are blowing. 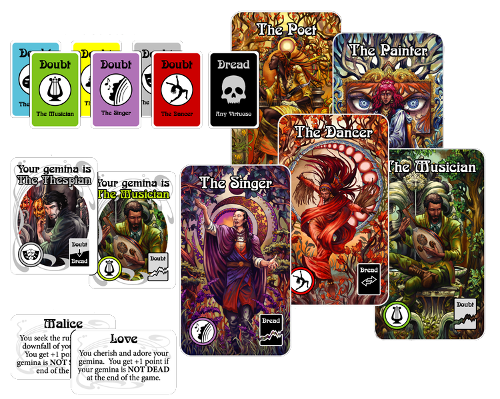 I hope people give Bemused enough time to grow. Jim Felli’s earlier games were terrific, but they required the players to digest a huge ruleset and block out most of an evening to play them. That in itself will rule them out for many people, since both Zimby Mojo and Shadows of Malice were growers as well, only revealing themselves to those who have the time and patience to dig into them. Bemused is just as strange as those games, requiring the same commitment and patience to pay off. The difference is, this is a 15-30 minute game whose rules are much easier to digest. That means that it’s easy to set up a second, third, or even a fourth game. That might actually be necessary, since the first game tends to blindside new players who might not have grasped what was happening before the game is over.

I’ve spent this whole review trying to prepare people for what kind of game Bemused is, but I haven’t really been clear about my own thoughts. Well here they are: I love this game. In its weight class, Bemused punches as hard as any game I’ve played. It has become my short game of choice, particularly with experienced players. Notably, I’ve been able to sell new players on it more easily than you’d think. It helps that this is a beautiful-looking game, with colorful and evocative illustrations. Bemused represents a big step forward for Jim Felli, whose games up until this point have almost dared you to play them. Bemused is much more disciplined as a design, and a lot more approachable, though still a little complex for such a short game. It’s a weird animal that requires commitment, but its social component means it will be played years from now. It’s a game designed to stay on your shelf forever, long after less memorable designs have withered away.