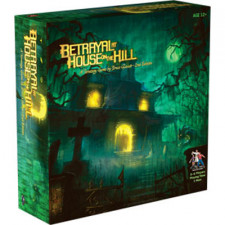 Betrayal at House on the Hill Review

Usually when someone calls a game an â€œexperienceâ€ game, what they mean is that the gameplay is terrible, but at least you get to pretend to kill orcs or fight vampires. Put another way, â€œexperience gameâ€ is often used as code for â€œthis game is bad but Iâ€™m too nice to say so.â€ Except that isnâ€™t the case when it comes to Betrayal at House on the Hill. Betrayal is definitely an experience game in that it creates a narrative and provides a wonderful atmosphere. Further, itâ€™s more about the narrative and the exploration than it is about the more gamey elements of stats and die rolls. Yet, for the most part, it is also mechanically enjoyable.

Each player starts with a character with a few stats. They begin in the entrance of the House on the Hill and start exploring. Generally, as they enter a new room a tile is drawn and added to the house. That tile might have special rules or might require them to draw a card. Cards can include special events that the player must react to, or unique items that provide the character with a new ability or upgraded stats. The most important card draw it can have, though, is the omen card.

Omen cards have a variety of effects. But after each omen, the player must make an omen roll. Dice in Betrayal have faces with zero, one, or two pips. Six dice are rolled. If the total is equal to or more than the number of omen cards drawn so far, then everything is fine and play continues. If not, then the betrayal occurs.

Each side reads their booklet secretly. Often, one side is unaware of how the other will win. Sometimes, there are even rolls or checks made that are of no consequence â€“ just to keep the tension mounting for the other team. Then, whichever side meets their win condition first is the winner. A typical game takes about sixty minutes.

Betrayal is an â€œexperience gameâ€ because, for the first part at least, there really arenâ€™t any objectives or strategic choices. You can stick with the group or go off on your own. But until you know which of the 50 scenarios you stumble into, itâ€™s not clear which is better. And, sometimes you come upon a room that drops you from the top floor into the basement, or otherwise separates you from the group. So things just happen and you roll with it. In the pre-betrayal moments, you just enjoy the exploration and the interesting rooms that arrive.

After the betrayer is revealed, things get a lot more gamer-y. You have a definite objective and you know, in general, what you have to do to succeed. But the interesting thing is that you donâ€™t always know how the other side will win. This is especially common for the hero side. Often the betrayer makes rolls or does things that seem â€¦ inconsistent with your objective. This leads to a wonderful feeling of suspicion that maybe you should be doing something else, and the paranoid sense that if you donâ€™t move quickly, youâ€™ll end up losing.

And one of the great things is that, until the betrayal happens, you really have no idea what to expect. In one scenario, we found ourselves exploring an underground lake in the hope of saving a little girl. In another, we had to find a mystic organ before terrible bats attacked us. In my most recent play, the betrayer turned out to be a cannibal and started attempting to devour the other players! In each case, there was a core strategic element as the two sides, heroes and villain, sought to achieve their objective. Ultimately, though, the game is not about making certain die rolls or moving your characters just right. Itâ€™s about the traitor in your midst and the horrible monsters, villains, or nightmares with which you must contend.

The game is readily accessible to players of all types. It sits in this little niche where it is part party game, part thematic experience, and part hidden traitor. You just donâ€™t know who the traitor is (or, indeed, whether you are the traitor) until you get there. Best yet, it is a great exemplar of all those genres and anyone who likes one or more of them is bound to enjoy Betrayal.

The game does have its limits, though. This is not a tactical minis game filled with strategy. This is not a social deduction game where you try to figure out who the betrayer will be. And the strategy element, while present, isnâ€™t all that prominent. So, if you are looking for something more cerebral, Betrayal will disappoint.

But if you are looking for a genuinely fun â€œexperience gameâ€ that has tension, excitement, paranoia, and laughter, then Betrayal at House on the Hill might make your dark and stormy night. Here, you get the fun of going up against monsters and horror in a tight package with strong narrative and good mechanics. Whatâ€™s not to love?