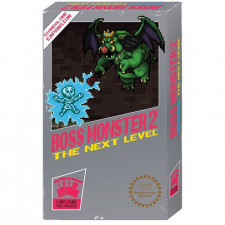 Boss Monster 2: The Next Level Review

Are you a bad enough dude to flatten druids, barbarians, necromancers and vampires in your quest to become the biggest Boss Monster around?

Video game sequels come in two categories: there are the world-shattering ones that completely redefine a beloved franchise, and there are the ones that just give you more of a good thing. Boss Monster 2 from Brotherwise Games belongs to the latter category. This standalone expansion to their family-friendly, retro-inspired card game introduces a few innovations, notably adding more intimidating heroes to the roster, but it's much more Mega Man 2 than Ocarina of Time. 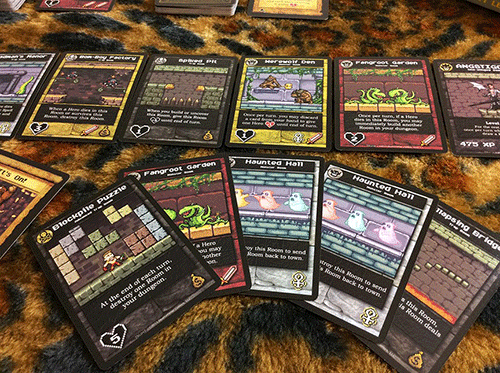 Just like before, 2-4 players take control of dungeon bosses in the side-scrolling, 8-bit world of Arcadia. Gameplay alternates between the Build phase, which lets you build your own deathtrap dungeon one room at a time by playing Room cards into a 5-card tableau, and the Bait/Adventure phases, when the four classes of heroes are lured to the dungeon with the most of their preferred treasure type. Once inside a dungeon, heroes take damage from each room they enter. Killed heroes are added facedown to your victory display, while surviving heroes add to your boss's wounds. The first player to collect 10 hero souls wins, but any player who ends a round with 5 or more wounds is eliminated.

One of the most misunderstood aspects of the original Boss Monster was the source of conflict. This isn't a semicooperative monsters-versus-heroes survival match; it's much closer to a bidding game, where the treasure icons in your dungeon rooms represent your bid, except that after you "win" a hero you still need to kill the pesky thing. The rhythms of the game force you to strike a balance between aggressively bidding on the weak early heroes and preparing your dungeon for the intimidating Epic Heroes, who boast considerably higher HP value and double the stakes on both wounds and souls.

Boss Monster 2 shifts this balance slightly in favor of the heroes. Two new hero types represent the expansion's most radical new concept. Dark Heroes have average health for a Normal Hero, but they are easily corrupted and can be buffed by the other players. Anybody who discards a Room card containing the hero's preferred treasure adds +3 to the hero's HP, boosting a survivable 6 to a deadlier 9. Hybrid Heroes are Epic Heroes drawn to a mix of two treasure types, evening out the late-game luck factor, but they also have unique special abilities: the Archer completely bypasses the last Room of your dungeon, while the Swordmage gets deadlier each time any player plays a Spell. 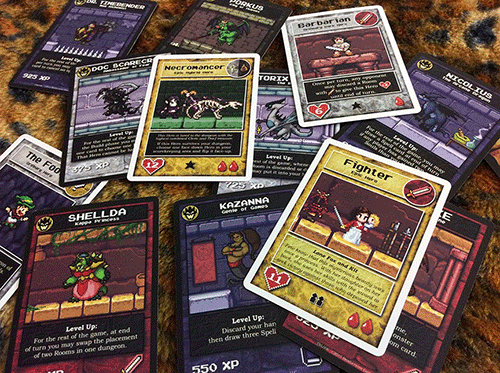 Such Spells were previously Boss Monster's only interactive element, allowing you to mess with an opponent's dungeon or give their heroes an advantage. Boss Monster 2 retains this focus with cards like Another Castle, which lets you send a scary hero from your dungeon to an opponent's, and Fairy Fountain, which temporarily removes a Room's damage and gives it a hero-boosting effect. However, interactive elements are now found among the Room and Boss cards, as well. The Bullet Builder lets you discard a Trap Room to weaken an opponent's Monster Room, the Rust Monster Pen has the inverse effect, and the Werewolf Den ignores the whole Room thing and lets you buff heroes directly. Among the new Level Up abilities, Kappa Princess Shellda lets you swap two rooms in any dungeon once per round, while the terrifying dragon Torix Uz'kali lets you grab any Monster Room that gets discarded or destroyed. One subtle change is a greater emphasis on lasting Level-Up effects over one-time bonuses.

A final, welcome change is the addition of Rooms that do something when they are built and each time they are uncovered (such as by destroying the Room you built on top of them). In such a tight race for treasure superiority and dungeon deadliness, any effects that rely on destroying your own Rooms are tough to justify, but this effect makes them slightly more desireable while opening up new combos. Alongside this change, of course, are a plethora of new self-destructive Rooms, my favorites being the Bom-Boy Factory, a high-damage Basic Room that blows itself up the first time a hero enters it, and the Blockpile Puzzle, an equally buffed Advanced Room that forces you to destroy a Room in your dungeon at the end of each round.

This added emphasis on limited-use Rooms and buffable heroes makes the game feel trickier than the first; it took me, a Boss Monster veteran, a few plays before I found the combos and balance in the new deck. Even then, I found myself missing basic utility rooms from the original, like the Brainsucker Hive, the Dragon Hatchery, and the Minotaur's Maze. BM2 brings many of these Rooms' effects back in a slightly trickier form, often swapping a basic Room for a stronger Advanced version, but that reduces their early-game utility.

Boss Monster 2 is the epitome of a "more" sequel. Despite some fresh ideas, it largely delivers the same experience as the game it's expanding, while the trickiness of the Room deck makes it work slightly better as an expansion than as a standalone. The net effect is a game that's about the same as the original, neither better nor worse.