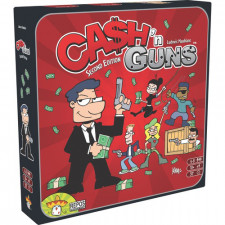 You remember that first time you watched Quentin Tarantinoâ€™s â€œReservoir Dogsâ€ and you wandered around humming Stealers Wheel and demanding your friendâ€™s call you Mr. Blonde? Just begging for someone named Marvin to cut you off on the highway. I still shout â€œYouâ€™re gonna be O-K!â€ in Harvey Keitelâ€™s off-kilter timbre when my daughterâ€™s distressed.

Cash â€˜n Guns took that concept a step further, transforming the definitive moments of a classic crime film into a surprisingly playable and very enjoyable 30 minute party game with just enough meat on the bone to fill your belly. As playerâ€™s point foam guns at each other the atmosphere is over the top and ridiculous yet exceedingly cool. That sense of moxie permeates the design like a sponge submerged in scotch.

The object here is to win a Mexican standoff by not flinching, maintaining your composure so that you can make it past all of the earnest firearm-rattling and grab a share of the loot. Over the course of six rounds players will choose either a â€œClick, Clickâ€ card or a â€œBang!â€ card from their limited hand and place it face-down in front of them. When everyone is ready the table counts down and each player then quickly points their pistol at another player, sideways gangsta style if youâ€™re at my house. After a second countdown players decide to bow out and cower in the corner and stick it out and hope for the best. Finally, any player targeting an opponent who is still in the round reveals their card, dealing damage and knocking them out of the round if they played a Bang!

In the prior edition those who remained in the round and werenâ€™t shot would evenly split the money at the center of the table. If a fraction of a cut remained it would persist and go into the next roundâ€™s pot. The new edition revamped this system entirely adding an interesting drafting mechanism where players take turns grabbing a single piece of loot. The pile also is more varied than simply cold hard cash, offering players set collection incentives, diamond hoarding for a bonus and additional ammo as well as healing. The end result is a more varied payout that makes for some interesting strategic complications and a touch of layered depth that allows for engagement beyond a simple party game. Of course, players can ignore the fact that someone is piling up a huge amount of diamonds but theyâ€™ll do so at their own peril.

This underlying element of depth is really what propels the game beyond silly party fair and earns its way onto a gamerâ€™s shelf. Upon your first few plays youâ€™ll favor targeting the buddy that used to steal your lunch money when you little pukes were in 4th grade, but youâ€™ll quickly realize that who you target is very important. The table will need to adapt and force the leaders out of the round with either a hail of bullets or a mighty show of bravado. When you get past arbitrary gat-pointing and into contemplative knee-capping the ante gets upped and all of your trash talking is emphasized with a big fat dose of clever play.

Also making an appearance in the new edition is the role of the Godfather, which can be claimed as an option when taking loot. The Godfather gets first pick of the spoils and he also has the extremely potent ability to force a player to readjust who they are targeting, switching to whoever Brando decrees. This small twist is delightful as thereâ€™s inherent power but itâ€™s chosen at the cost of picking up another piece of skrilla or clip of ammo. The role will typically make its way around the table because of this and the joy will spread like laughter on the wind.

Thereâ€™s been a bit of a ruckus thrown around due to the removal of the â€œBang! Bang! Bang!â€ trump card that let you out-shoot another playerâ€™s â€œBang!â€ card but most of the conjecture is due to manâ€™s naturally resent of change. The rules are much cleaner and streamlined allowing for the revealing of cards to be handled more comfortably. Being able to avoid the awkward question of â€œOK, did anyone play a Bang! Bang! Bang!?â€ and just moving on to flipping the shot or discarding it is much preferred. The advanced undercover cop mode of play has also been gutted, apparently saved for future expansion material. This is a loss but the sting is softened due to the inclusion of two extra pistols supporting a solid eight players that the previous version did not.

Cash â€˜n Guns is a great party game for the discerning Tarantino fan or anyone who gets a kick out of threatening faux violence upon their friends. If you ever wanted to shout obscenities and follow-up your hollow brinksmanship with an actual pistol whip then you need to give Ludovic Maublancâ€™s design a shot. â€œHey Joe, you want me to shoot this guy?â€