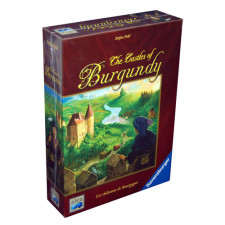 In Castles of Burgundy, two to four players compete to get the most victory points by strategically building out their plots of land. The theme is mostly absent, but the experience is actually quite fun. The game is full of little puzzles, difficult resource management and indirect but fierce competition to get wanted tiles quickly.

The game is played over 25 rounds. On each round, players roll two dice which are used to perform actions. Each player gets a personal board that has a grid of tile spaces on it. Each space has both a color and a number. There is also a common board in the middle of the table and tiles are placed on it in six numbered areas. On their turn, a player uses one of their two dice to either grab a tile from a matching area on the big board, play a tile to a matching space on their little board, sell matching goods or gather workers. A worker can be used to change the value of a die up or down one space. Because the numbers are distributed mostly randomly, it’s not always better to roll high or roll low. Instead, you want to roll the particular numbers that align with your goals. Players can also pay silverlings to get a bonus tile from the middle of the common board.

The tiles all have special properties. Mines give you a silverling at the end of each five rounds, animal pastures are worth tons of points if you can keep the pasture to one animal type, ships get goods and improve turn order and buildings provide a variety of unique effects. There are also knowledge tiles which grant ongoing special powers or end game points.

After each set of five rounds, the main board is cleared and re-seeded with tiles. At the end of the final, 25th round, points are tallied and a winner declared.

Castles is an engaging game that requires planning and strategy, but doesn’t feel overly heavy and never bogs down- provided that players avoid analysis paralysis. Competition is indirect, as is common for these types of European designs so there isn’t really any kind of player-versus-player interference. When the main board is seeded with tiles, it’s first come, first serve. So if you want to get those chickens before someone else – even just to keep them from an opponent – you’ve got to act quickly.

Although the game is light in rules and process (with only four things a player can do on a turn), there are tons of options and viable strategies. Filling in contiguous areas grants points – and doing so early gets a bonus. Trying to maintain your turn order can give you the first access to tiles when the board is seeded. But eschewing it leaves more actions open for other pursuits.

Even the knowledge tiles can allow for wildly different approaches. A few of the end-game tiles can make a big difference at final scoring if you play to those strengths. Some of the in-game abilities (like allowing a worker to adjust a die by two instead of one) can create wide flexibility. There are scads of options and more than a few viable paths toward victory.

And, despite the reliance on dice, this design hardly feels like a luck-fest. Rolling doubles is usually a bummer (since you have fewer options). But other than that, it’s more of a puzzle to fit any particular die roll into your strategy. The ability to use workers to change die results is a great feature. It creates a strong but interesting tension. How many actions do you decide to “waste” getting workers so that later actions can be highly efficient? Or, do you go full bore into your strategy and hope that you won’t need workers? It’s a balance every player must take into account. It’s all a little point salad-y, but certainly not the worst offender in that regard. There are plenty of things you can do that won’t directly generate points.

Castles is the kind of game that pretty much works for everybody. Hardcore gamers? Yep. There’s enough meat there that gamers will be creating interesting and diverse strategies while stealing precious tiles from opponents. Casual gamers? Yep. Tactical play is readily grasped and the relatively rules light nature of the game means that even new players can get into it quickly. Non-gamers? Yep. The plethora of opportunities for points and the aesthetic of building your own map are great ways to positively reinforce the experience. Heck, there are even multiple boards so players can start out exactly the same or have very different plans.

Castles of Burgundy is fun and I’ve enjoyed every play. It has a sort of vanilla but appealing quality that makes it easy to recommend. It works for darn near everybody and few in my circle of friends and gamers have played and failed to enjoy it. If you’re looking for a game that can be almost universally enjoyed, then this might be it. It is entirely inoffensive. No controversial theme, no direct attacks, no way to eliminate anyone from play. And even though everyone gets a turn and two dice each, it still allows for plenty of conflict, thrills and strategy.