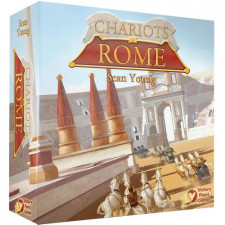 Critical Hits: Chariot racing fun; accessible and easy to play; supports up to 12 players (if you get creative and add some components).
Critical Misses: Abstraction and streamlining have taken away some of its inspiration's soul.

There is an inherent danger in streamlining, minimizing and reducing a game design that has a very specific kind of subject matter. Cut it too fine and you risk losing the descriptive texture and weakening the narrative. When designers like Sean Young set out to purposefully modernize an old design like Avalon Hill's classic Circus Maximus, an interesting dialogue develops wherein as players we get to see the clash of generations and the shift of expectations over time. And we also get to see what can be lost by modern design.

Mr. Young's Chariots of Rome, out now from Victory Point Games, embodies this kind of discussion. For those who have never gotten to play Circus Maximus, which remains the most complete design in the ultra-niche sub-genre of chariot racing games, I'd say you aren't missing much by today's standards but you really are. Circus Maximus was complicated, long, had a few tables too many, and its production quality wouldn't have passed desktop muster at VPG five years ago, let alone now since they are doing full-blown professional level manufacturing. But for all of its squirrely Avalon Hill-ness, it was a game like no other. You get around a corner; narrowly avoiding flipping your chariot. Then you might whip another player's eye out, just before you accidentally careen into the wreckage of another racer's chariot, destroying yours in the process. Then you could be dragged by the horses for a bit, cut yourself free, and run across the finish line, if someone else didn't run you over first.

Those are the kinds of things that Chariots of Rome has sloughed off in favor of a much smoother, more modern style of game. It's true that there is still drama and plenty of excitement, but in trading out the CRT-style tables that you cross-reference 3D6 (sometimes 2D6) die rolls and the extremely specific rules for resolutions based on card draws and a tremendously simplified speed-versus-control mechanic you simply are not going to get that definitive Ben-Hur experience. 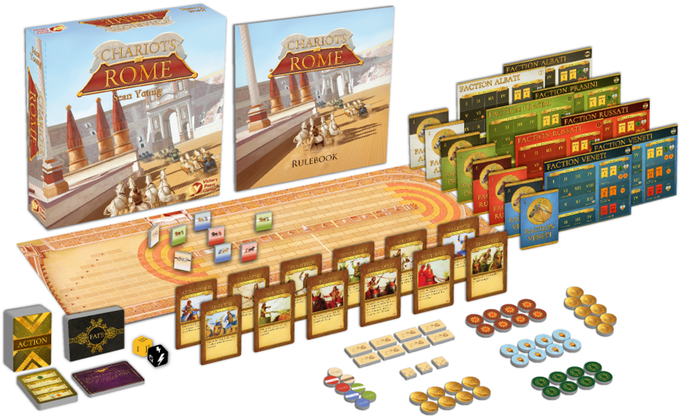 But Chariots of Rome is a decent- sometimes very decent- chariot racing design and I should know because it's one of those weird subjects that I find utterly compelling to the game. It's very easy to get a group of players up and quite literally running because the mechanics are simple and direct. Everyone can understand fatigue, spending points to execute attacks and drawing X number of cards and applying results based on the peril or hazard you are facing. And everyone can understand the point of a race, it's not exactly oblique.

Chariots of Rome does throw a few bits of narrative into the mix with a round-describing event card, and these can add some much-needed capriciousness to the big event. When the plebes get rowdy and throw a bunch of trash in your way or the gods decide to favor aggressive behavior, you'll have to adjust how you are running for the turn- if you aren't hemmed in against the wall or heading into a corner too fast and looking at drawing a lot of hazard cards. There are also Charioteer character cards, which are something Circus Maximus didn't have, and these add some needed texture - each also indicates, of course, the vaunted Special Ability that appears in seemingly every game published today.

I don't think Chariots of Rome lack heart- I think Mr. Young's intent here is noble and I appreciate any and all attempts to get chariot racing onto our tables. There's a lot more gameplay here than in the casual classic Ave Caesar and it is much more airtight than FFG's long-forgotten Arena Maximus. It's a good, solid racing game that plays quick and offers some compelling choices.

But what it does lack is soul. I'll disclaim that by saying that if you never played Circus Maximus, you might not notice it missing. What I mean by soul is that intangible, connective element that elevates the game from a me-first race into a vibrant story. The spark isn't there, largely because of the elements shaved away in favor of modern convenience. I can recall some crazy turn of event, some insane reversal, or absolute disaster from many games of Circus Maximus that I played 15-20 years ago, but I couldn't tell you one extraordinary story from a game of Chariots of Rome I played two weeks ago.

It's a devil's bargain to be sure- a highly playable, accessible game that has everything but a fiery spirit and a searing narrative line...or a kludgy, slow-as-molasses game with incredible detail and an almost Sam Peckinpah-like attention to the details of action. Avalon Hill did these kinds of games extremely well, but it's a form the medium has mostly abandoned. To that end, assessing Chariots of Rome among its contemporaries, we are given a fine game that definitely takes us to the Circus but it doesn't provide the conclusive experience while we are there.