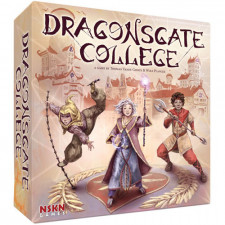 Youâ€™ve probably fantasized about how great it would be to go to wizard school, but I doubt youâ€™ve considered what it takes to run the place. Youâ€™ve got to train students in brawn, sorcery, or stealth to become the best warrior, wizard, or thief they can be. Youâ€™ve got to hire new professors and expand the campus. This is what Dragonsgate College is all about.

Mechanically, Dragonsgate College is a dice drafting game There is a pool of dice made up of both playersâ€™ and neutral dice. The cool part about this is that when selecting dice for actions, you can select your opponentsâ€™ dice from the general pool. When this happens, both you and your opponent get to take an action. The not so cool part about this is how it pulls the game into a â€œWhoâ€™s turn is it?â€ Abbott and Costello bit. The active player takes an action first, giving the other player some time to decide what to do. However, without knowing that you were about to have an action coming up, it can take some time deciding whether you want to acquire new apprentices/professors, construct a building, take a trip to the training dungeon, or select from the myriad of other choices on the board. These actions arenâ€™t hard, but some can get blocked out, meaning you have to recalculate your plans. By the time actions are resolved, the next player is anxious to goâ€¦ as soon as you remember whose turn it is. 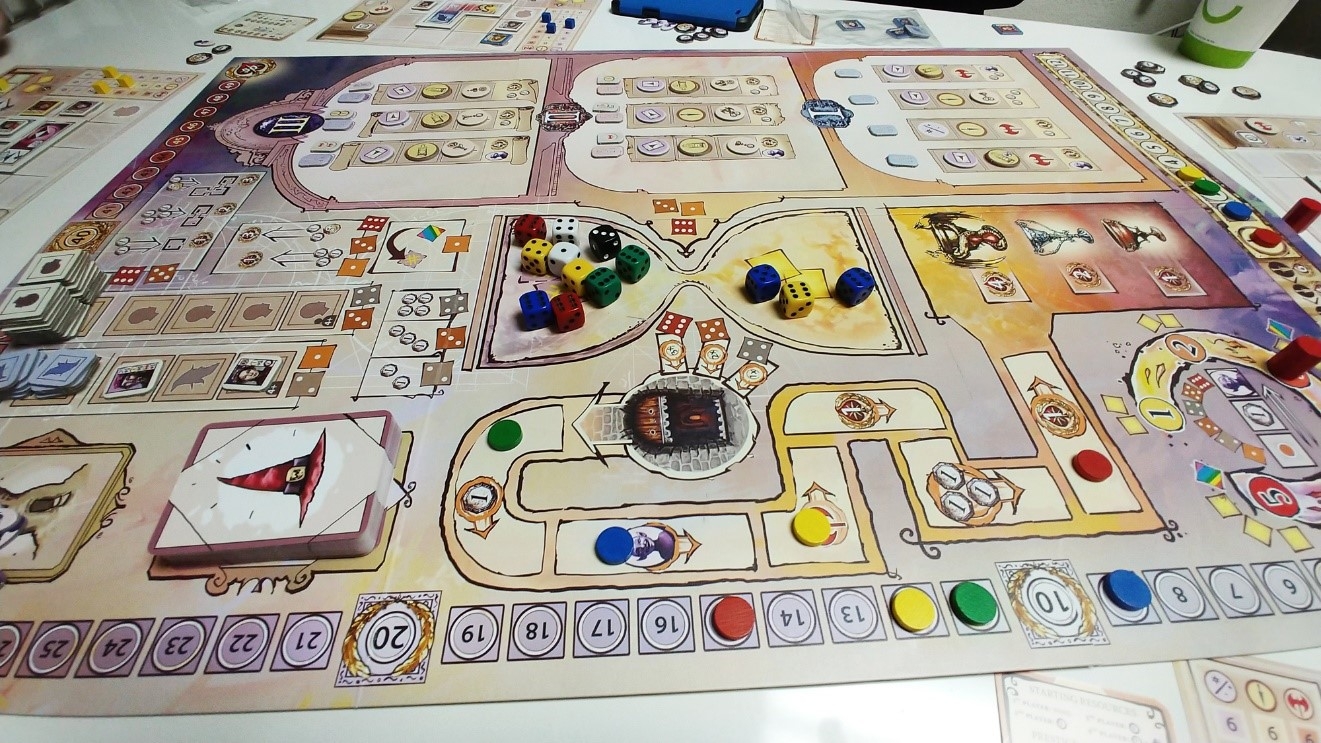 The board is so big, we had to place it diagonally on the table.

For the most part, the game revolves around the career track. Apprentices each have skills that you compare with the values on the career track. When you meet the requirements, your apprentices have graduated, moving on to bigger and better things. I think. Iâ€™m not sure what happens to their resume after you discard them, but I know itâ€™s good for your final score. In order to get your apprentices ready for the â€œreal world,â€ you try to boost the brawn, sorcery, or stealth skills on your player board. You compare values of the primary stat to the secondary two stats required to gain a career token thatâ€™s less fiddly to actually do than it is to explain. Thereâ€™s a rotating door of apprentices that go on and off your player board, though perhaps not nearly as often or easily as the game wants. Of course, students need teachers and so you can bring in new professors to boost your skill tracks. Thereâ€™s no ramp up here though, as apprentices and professors donâ€™t get progressively better over the course of the game. As professors are replaced on your board, you adjust the skill tracks accordingly. The only way to add to the available number is to construct buildings that can house additional professors.

Buildings come in sizes of 1, 2, or 3-squares and are placed on your player board. There is a minor spatial element here as you can get bonuses for covering spaces and also receive negative points for empty spots at the end of the game. Buildings require maintenance, however, meaning you also need to think about your income and expenses and if the provided bonuses are worth it. Itâ€™s an odd part of the game given that itâ€™s simultaneously necessary without being the primary focus. 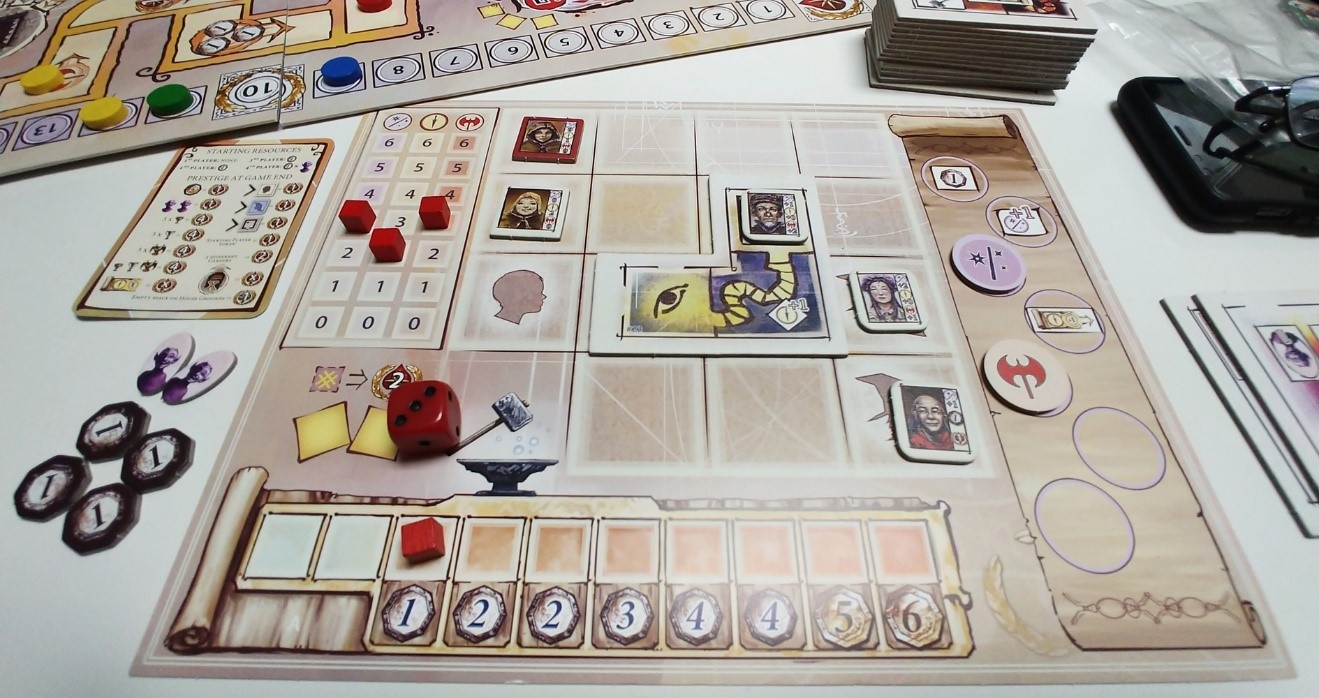 There are a few other parts to the game that are auxiliary to your main goal. The training dungeon provides extra bonuses and is another way to spend your die action. The subterfuge track, which you can move along when choosing a thief career for your apprentice, awards points according to rank at the end of the games. Likewise, a career in sorcery grants you wizard cards that mostly provide benefits to you and your opponents. There is a good-sized stack of these, yet youâ€™ll only see a handful in a game. Lastly, there are imps, expendable tokens that let you adjust the value on your dice. Iâ€™m indifferent toward these as they feel more like a requisite given itâ€™s a dice drafting game rather than an integral part of the decisions on your turn

There are multiple bits in Dragonsgate College that are somewhat jumbled together. Many of the pieces feel like an afterthought, maybe as a kind of patch or maybe just to give the appearance of having lots to do. The game works smoothly enough, but itâ€™s a clock that needs a lot of winding rather than setting itself. After five rounds, it ends in a kind of whimper. Iâ€™m not sure Iâ€™d want it to go on any longer, especially with the delays caused by a full complement of players, but it also feels like it stops short of a meaningful experience. I have some nitpicky criticisms as well, namely the oversized board that holds small apprentice/professor tiles with micro-sized stats. The drab pastel palette is non-offensive, evoking little excitement â€“ an unintentional, yet fitting, match for the game as a whole.