Critical Hits: Lighthearted take on the Grimdark setting.
Critical Misses: Boring, uninteresting design that strains itself trying to be "crazy."

Before Captain Sonar, Roberto Fraga's best-known designs were lighthearted, whimsical titles such as the classic Eiertanz (Dancing Eggs) that comes in an egg crate and Trotofant, a game where players use party blowers like elephant trunks. Needless to say, the announcement that Mr. Fraga was working on a Warhammer 40k racing game (with Yohan Lemonnier) raised my eyebrows. The title is Gretchinz!, and as 40k fans might surmise it is about the diminutive "Grots" that often serve as hangers-on to larger Ork armies. Conceptually, this should have been a jackpot- fun, silly kart-style racing coupled with a little 40k Dakka (that means shooting). Unfortunately, the game feels like it is straining itself to provide a wacky, rambunctious race with a Hanabi-like element where everyone can see what's on your cards but you. The end result is kind of cute in a pathetic way, but like most kind of cute games, it is sadly not much more than a waste of time. 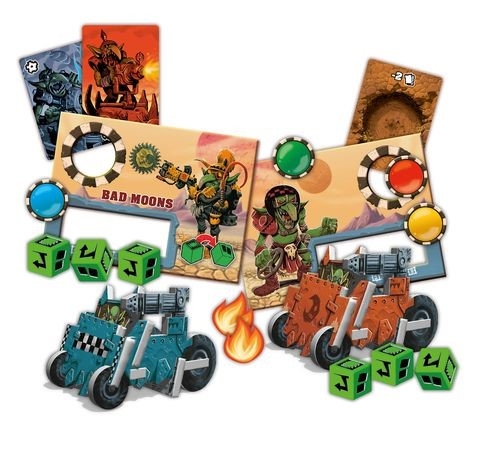 Let's talk straight. This game was quite clearly NOT designed explicitly as a Warhammer 40k product. I would be willing to wager that the design was something that Fraga had sold to Spanish publishers Devir prior to their being granted a Games Workshop license, and the licensed material (which really amounts to just a couple of proper nouns such as "Waaagh" and references to Gork and Mork) was applied post facto. Make no mistake- there is precious little in this game that resembles anything to do with the Warhammer setting. Calling an attack card a "Dakka" card does not cut it.

Out of the box, it looks fun enough. The more comic-style art is decent, and I do like when GW allows for some humor, as even the Grimdark can use some levity. There are four little 3D cardboard Gretchin buggies to assemble, but when you realize they are all exactly the same, some of the coolness immediately wears off. What a missed opportunity that was, but of course it doesn't matter because the vehicles are all fundamentally the same unless you play with the "Klan" rules. Yes, that's Klan with a K. GW spells it with a C, for the record. Someone didn't bother to check, I suppose.

At any rate, everybody starts with their buggies ready roll into a field of terrain cards that begins with two more cards across than there are players. Each terrain card has an effect, things like costing discards, drawing cards, additional movement and so forth. The round starts with players rolling three dice simultaneously, over and over, until one player is satisfied with their results and has locked them into a 1-2-3 sequence. This player is supposed to shout "Waaagh!" Players still scrambling to make their dice roll right or work out the right order are forced to make due with what they've got when the finishing player hollers. The dice drive movement and determine actions in sequence- swerving the buggy to the left or right, shooting at other buggies, drawing cards, asking another player to tell you how many attack cards you have in your hand since you can't see them, or using your "Klan" ability. 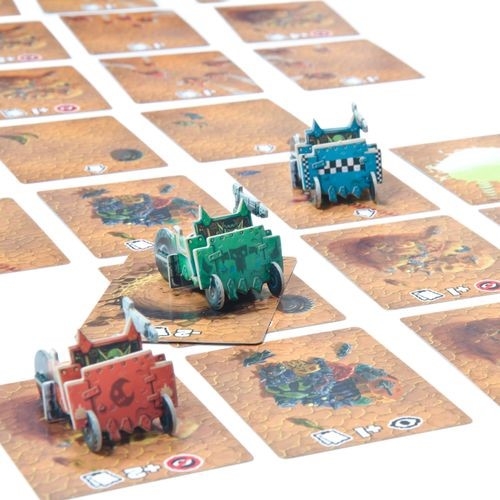 Moving is very straightforward- essentially, the buggies are moving constantly forward and you can only jigger it to one side or the other to try to avoid negative terrain or crashing into another buggy. There is good terrain such as a puddle that can put out fires on your buggy or scrap materials that let you draw a card, but also bad terrain like a Squig Stampede. Control is always quite limited, so you can expect to run your little Gretchin buggy ragged on its way to the finish line- if it makes it. It all sounds breakneck and ridiculous, but it just does not create a sense of uncontrollable velocity, which is what I think the design goal was here.

Attacking is also an unsuccessful subroutine. When you use a Dakka die result, you can target any buggy in the game- no rules regarding line of sight or anything like that; it's all Blue Shells, if you catch my meaning. You select two cards from your hand without knowing, by default, if you are selecting firing, problem, or explosion cards because the other players can see what you have. You can wind up hurting yourself (putting damage on your buggy) or causing yourself to discard all of your cards. It's not really funny or crazy or dramatic. It's just kind of lamely amusing when someone inadvertently blows themselves up. You can also target the terrain, attempting to put a discard-incurring crater in front of another player in hopes that they will steer into it.

The idea is to get to the finish line, of course, which is usually seven rows of cards from the start; you use the box as the end of the race. It's brief, at least. Expect the game to take about 30 minutes unless you want to play a longer variant or combine two sets for up to eight players. That's all for you, mate. I'll pass.

Everything about this game feels like some kind of slightly junky, ill-considered piece of work that fell out of the bad side of 1990s game design. It very much reminds me of the kinds of games that I'd see in shops back then, back before you could really do any kind of research on them, and you'd think would be really fun and awesome but they were badly written and boring despite good subject matter. It lacks compelling mechanics and interesting gameplay, but more significantly it lacks any kind of detail or depth- this is most definitely not Gorkamorka: The Card Game as some may have hoped for. This would be fine if it succeeded as a goofy, viciously cutthroat racer with lots of laughs and surprises but the game tries much too hard to be that kind of frivolous, capricious design.

And it definitely doesn't work as a kind of 40k kart racer. It's a shame, because that is actually a mighty fine concept for a game. It's doubly a shame because Games Workshop is going through a golden age right now, and this wretched "Little Speed Freaks Game" as it is billed is quite possibly the worst product with the company's name on it in the past several years.