Action Phase has produced an impressive line of small games with simple structures, accessible rules, yet surprising depth - as my colleague Raf similarly noted with the publisherâ€™s Ninja Camp. Indeed the company files these under their â€œSmall Box Big Funâ€ line. As in other titles of that family, Retreat to Darkmoor is undeniably simple, but gives you a mouthful to chew. So much that itâ€™s sometimes difficult to digest! Certainly more than in its sibling designs.

Retreat to Darkmoor is immediately unique in that itâ€™s a game about losing. You assume the role of a dark overlord frantically retreating like Cobra Commander away from an elite squad of legendary heroes that have foiled your castle assault. Unlike Cobra, some of your rank and file will die, killed not just by the heroes, but other players as well. Donâ€™t blame them. Theyâ€™re just as evil as you.

To avoid that fate your minions attempt to reach the safe haven of various locations set out based on the number of supreme leaders ingloriously trying to escape. Each leader has an identical army of minions and youâ€™ll have access to five on a turn. Choose one to make a fateful dash and play it to any location. If there are already minions there, it must get in the back of the line - which is not a place you generally wish your minions to occupy. Thatâ€™s because every minion has a peril value. When the accumulated peril reaches a certain level it triggers a legendary hero attack. The champion kills the minion last in line, while the rest of the horde escapes to that localeâ€™s safe haven, each one scoring points for its master. 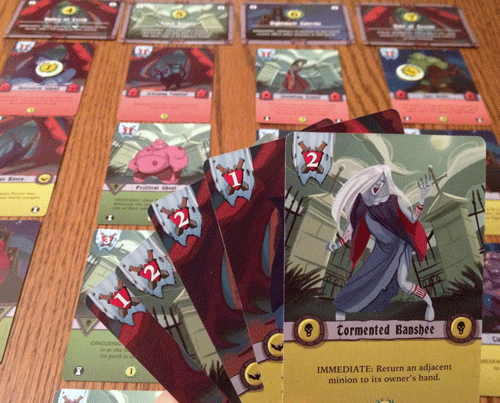 Now while your minions may be cowards, they at least can be rather devious. Most of these foul thugs have either an immediate or ongoing ability which affects play- oftentimes in wild ways that really shake up the panicked hordes. So which lackey you play might send other minions to new locations, swap a couple, push one to the back of the line, add extra peril to one area or outright kill off another minion. Some of these powers take effect when you play it, while others donâ€™t fire until things start happening - as in attacks. Heroes and particular locations can also influence gameplay and reshape the landscape.

Once you endure a set number of these rearguard assaults, your contemptible retreat is complete. You can finally breathe a sigh of relief - with your tail securely between your legs - and count survivors. In addition to points earned from escapees, you can win bonuses at locations for accumulating more peril than your odious colleagues. The overlord with the most points wins. But donâ€™t get too cocky. Remember, youâ€™re still a loser.

If the whole â€œplay a card to a location and watch the chaos unfoldâ€ format sounds familiar, then youâ€™ve played Smash Up. It even has minions and all. Retreat to Darkmoor is tighter and more streamlined, but very much retains the nauseous bedlam of Petersonâ€™s ongoing hit, with a couple essential differences. One, the locations donâ€™t change in a game. Instead of a certain strength â€œbreakingâ€ or overrunning a base, the collective minionsâ€™ peril value entices the current hero out for a smackdown, who strikes and then is replaced by the next. Afterwards the area clears of fleeing, yellow-bellied hordes, ready for a new gathering of whelps. 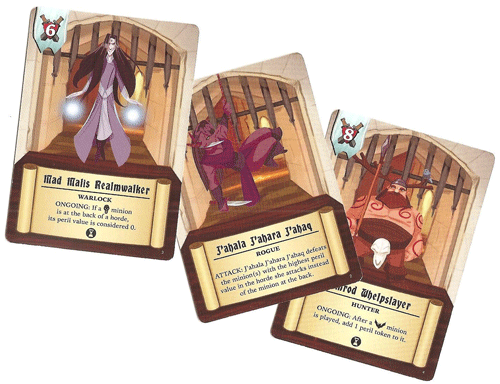 â€œYes, these are some of the heroes. No, you donâ€™t get to play them.â€

More profoundly, there are no unique factions or decks - nor unending expansions of new ones which are difficult to follow and expensive to keep up with. Each player has a standard allotment of identical minions. So you wonâ€™t be surprised by that massive Bear Cavalry Bear Hug that you didnâ€™t know existed. This significantly increases its accessibility by flattening the learning curve, although admittedly there still is one. While identical you all still retrieve your army of the damned randomly. But if you can count cards, or are somewhat adept in remembering whatâ€™s come out - indeed you can see many of them at a time laid out on the table - you can use some calculated strategy.

Thatâ€™s not to overstate the designâ€™s strategic reach, however. This free-for-all is clearly a tactical fire drill whose mechanics really deliver a â€œI donâ€™t have to outrun the bearâ€ experience. The card play appropriately emotes the frantic escape theme. Immediate and ongoing abilities allow you to jostle for position, throw others behind you and otherwise desperately do whatever it takes to ensure youâ€™re not last in line when the hero attacks. There is a reasonable amount of information to track as one play can spark a chain reaction of comboing abilities. Still, it creates wild bedlam, light-hearted tension and sweet, sweet pride when you can engineer a power swing. Running like a frightened coward was never so fun.

Retreat to Darkmoor works well as a next step after gateway titles. There is a moderate learning curve with more information to track than appears at first blush. And the fantasy setting may not be ideal for attracting budding gamers. However, its ease, compactness and middleweight complexity make it tolerable and accessible. It challenges you in a positive way while allowing you to explore crazy combinations, wild play and fun interaction. Its evolving tension will prove fertile ground for hard gamers, as well. Even though youâ€™re getting beat down, this one should be a winner for lighter gamers who crave more depth - and the experienced gamers playing with them.