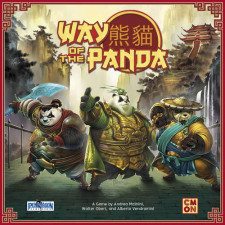 Try out your own panda Kung Fu skills against all the bandits on the silk road in CMONâ€™s Way of the Panda board game.

Way of the Panda is a worker placement game designed by Andrea Mainini, Walter Obert, and Alberto Vendramini and features amazing artwork by Davide Corsi.

Published by CMON games, Way of the Panda plays 2-4 players and playtime is roughly 60-90 minutes. Retail is set for 74.99 which given the sheer amount of miniatures and components is a pretty standard price point.

In Way of the Panda, you are a part of one of four panda clans trying to reclaim your lost homeland. Youâ€™ll need to rebuild the various cities across the land to accomplish this task. The catch though is the roads are dangerous and plagued with countless ninjas and bandits. You must assign guards by having your panda champions clean up the roads.

Each player has three champions, a monk, a governor, and a warrior. These champions can be powered up with items in order to defeat more ninja along the roads, as they can only defeat one to start. 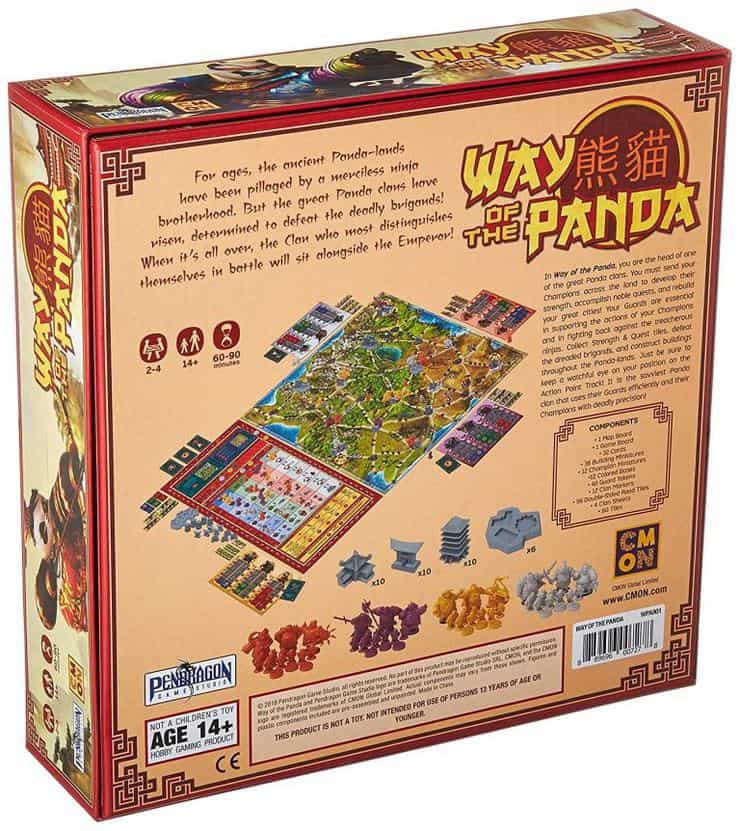 Way of the Panda is a worker placement game at heart, so each player has little panda worker minis. You take turns assigning your workers on the action board to take various actions. Actions range from moving one of your champions, gathering power-up items, gaining quest tokens for end game points, and building structures to create cites.

Each town space becomes a city once all three building are erected, and each different champion is able to build each of the three different buildings. The monk can build the gate, the governor can build a market, and the warriors build a pagoda. Once the city is built the buildings are replaced by a city tile which hasnâ€™t slots for the building and you can build each building once again in order to upgrade a city to a capital. The end game is triggered once 6 cities have been built or once the second capital is built. Buildings require an increasing amount of ninjas to be defeated in order to build more each time so you will need to have your champions clear out the roads often.

The worker placement board in Way of the Panda is pretty interesting, each row down costs an increasing amount of action points to execute based on the strength of the action. Also once you place a worker down on a space you can never place one to the left and above your row.

Another note is if a worker is already on the space you want, you have to place one more worker than was placed there before, for example, if someone placed two workers on the space you want you would place three. Placing more workers is not all bad since you gain an action point per panda worker you reclaim at the cleanup step. Another note about your action points is if you spend too many you can go negative which causes you to lose points.

You can also play with advanced objective cards in Way of the Panda. Some of these involve route building utilizing your guards or even being the first to build certain structures. There will also be an endgame objective in an advanced mode such as end the game with all there of your champions in the same city space.

Way of the Panda is a great medium weight worker placement game. I really appreciate the component quality as well. Each player color has unique sculpts for each of their champions which is a great touch. Most games would just have a static sculpt for each character class, but Way of the Panda doesnâ€™t disappoint. The artwork is top notch and is very crisp and colorful. The gameplay is very straightforward and rewarding.

If you love worker placement games and Pandas you canâ€™t go wrong with Way of the Panda from CMON games.