Critical Hits: Lots of new Necromunda content including a full gang and perilous terrain rules.
Critical Misses: Nothing as sold is really complete without another product in the release.

Necromunda: Underhive was one of my favorite games of 2017 - it was great to see Games Workshop not only revisit one of their most beloved and storied games of the 1990s, but also update it and revise it in significant ways including a great 2D "Zone Mortalis" version that plays more like a board game. But of course, like most players, first on my want list was "more gangs". Sure, the Escher and Goliath gangs in the main box are great...but I'm a Cawdor man, and it felt sort of limp to just have two groups to choose from at the outset. Now, here we are looking at the release of four supplemental products centered on a new Gang War 2 book and although I'm happy to see that the Orlocks made it to the party, I'm not crazy about the fractious way that GW is presenting these expansions. 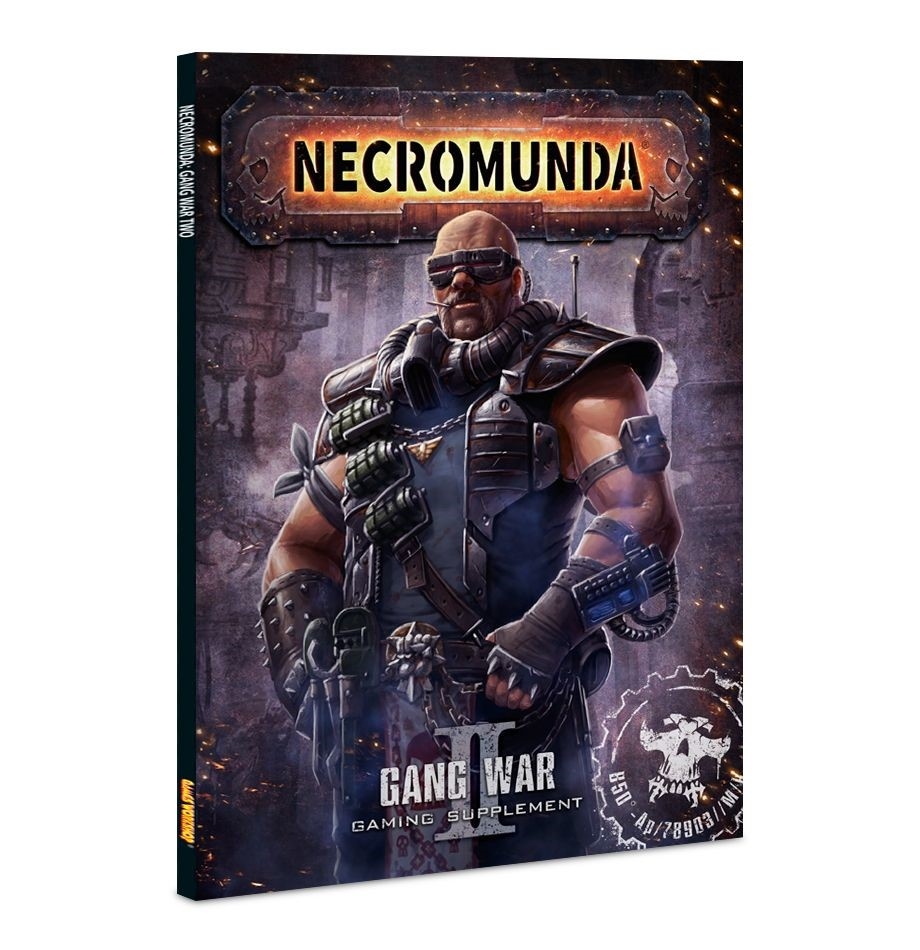 Gang War 2 isn't nearly as essential as the previous Gang War book, released in the initial wave, is. It's a nice book, as you'd expect from GW, and there is plenty of great fluff and artwork. Longtime fans will definitely raise an eyebrow that a Squat makes an appearance in the opening pages. The bulk of the book is focused on the new version of the Orlock gang (including armory and equipment), new terrain peril rules that correspond to the Badzone Delta-7 tiles sold separately, and lots of content regarding mercenaries and hangers-on. This is all good stuff- especially the new terrain rules- but if you aren't playing with mercenaries, aren't interested in Orlocks, or if you are primarily playing Sector Mechanicus (i.e. 3D terrain) games then the value of the book is definitely lessened. 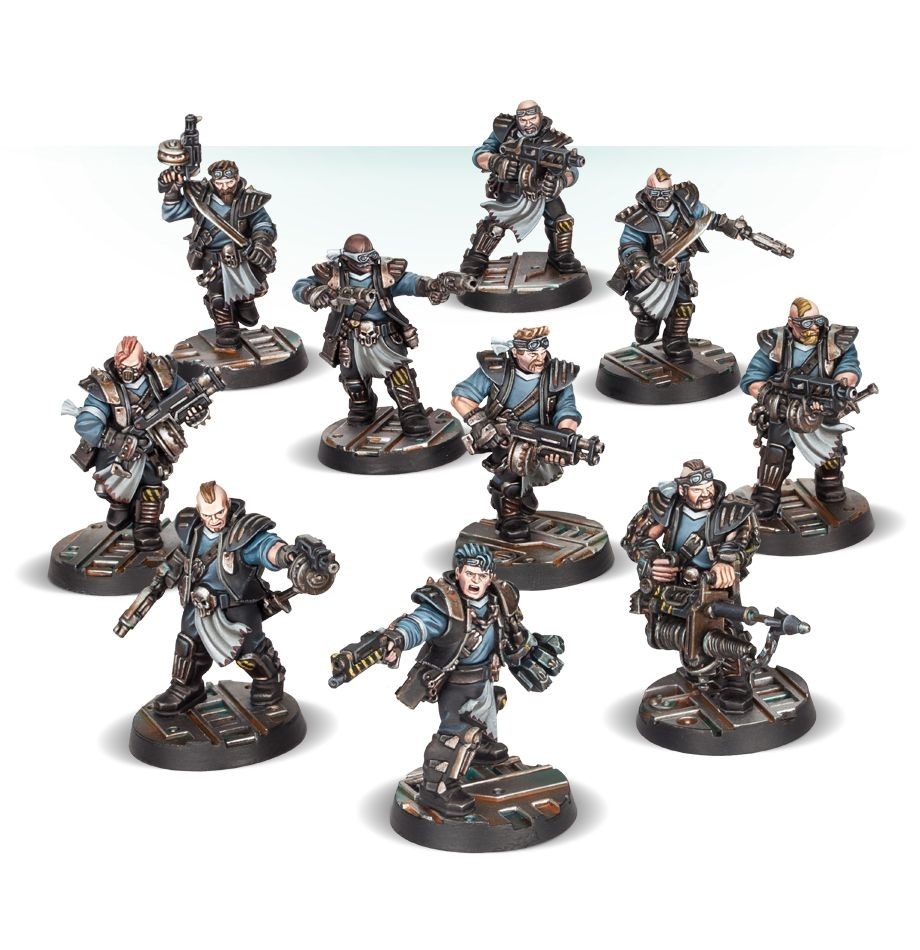 The "Sump Dogs" really should have asked for a cooler name.

But if you are interested in Orlocks, then you'll want to pick the book up because it has all of the essential information in terms of background and gameplay content. These guys are the working men of the Underhive- they are billed as miners and engineers and they have a less extreme, less cartoonish look than Goliath or Escher. The models are very good, and the kit is packed with options for how to kit out this quite shooting-oriented gang, but they are also pretty boring. After the extravagance of the two core gangs and the promise of Van Saar going in a very different direction, Orlock comes across a bunch of vanilla dudes. Their weapons- apart from a sensational harpoon launcher that has a chance to skewer multiple enemies - are pretty dull. Shotguns, autoguns, knives, grenades - the standard fare. But they are also more straightforward to play, and may be better suited for beginning players. Especially those who may have found themselves frustrated to see Goliath completely roll Escher in the melee game time and time again.

Like with Escher and Goliath, a lot of flavor comes from the gang's Tactics cards, which are of course sold separately. Like with the previous sets, the cards come with 8 cards just for Orlock to use and 12 that anyone can use. Those 8 cards help to give the gang a little more flavor and 12 more cards for general use is appreciated, but realistically nothing in the card pack is what I would regard an essential purchase. Nice to have, but the price for 20 cards and a few blanks to write your gang members' stats on may not be worth the price- especially when these cards should have just come with the gang models. 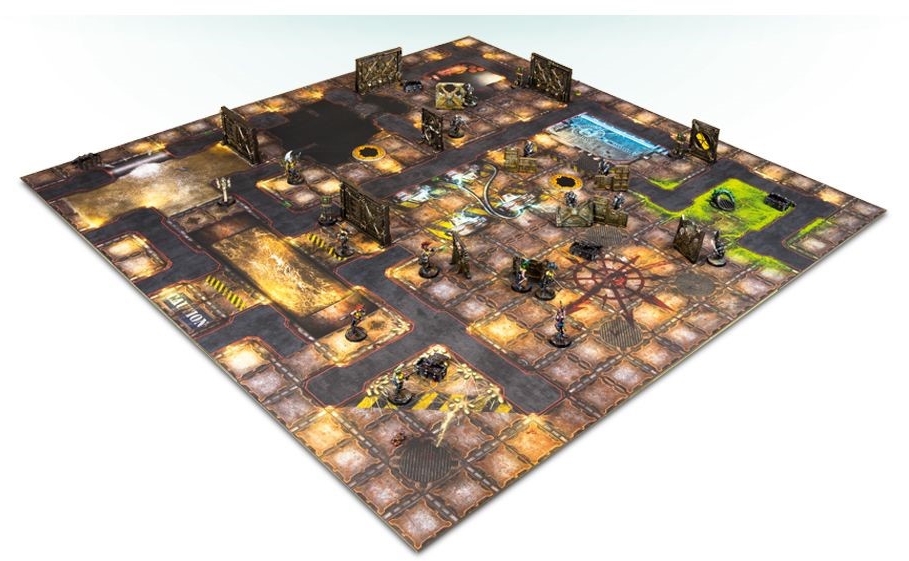 Rounding out the Gang War 2 release is my favorite piece in the set- the Badzone Delta-7 tiles. This is a big set of new double-sided Zone Mortalis tiles that feature all new features that impact gameplay. There's glowing, poisonous spores. A trash compactor. A xenos (Tyranid?) nest. A sludge farm with vats of questionable biological material. And, interestingly, a cult ritual chamber that brings a little Chaos into the game. Some markers are also included for some of the perils. This is a neat set of tiles that greatly expand the Zone Mortalis version of the game and if that's the flavor you prefer then this is a must-have. If you are mostly playing on terrain tables, then you might find yourself more interested in modelling some of these areas than using the 2D tiles.

It really stinks that no rules are included in Badzone Delta-7. Instead, you have to buy Gang War 2 to get them. And that kind of sums up this entire release- codependency is built into the marketing. You have to buy at least two of these products to get what you want, whether it is the Orlocks and their cards, the terrain and the rules, or the models and the rules. There's no reason that all of the material in Gang War 2 couldn't have been in Gang War 1 (or in the core rulebook for that matter), the miniatures should have come with the cards, and the terrain tiles should come packaged with rules. I'm a miniatures player so I'm used to the rules and models being sold separately, but this instance irks me because all of this isn't really a la carte. There was a time when GW would have put all four of these items into a box and called it a full expansion to the game.

But on the other hand, I'm a GW fan so of course I want and had to have all of these. And I don't regret them because I like the added content, I like the new terrain a lot, and I like having a new gang on the table. But I'm not convinced that most players would do well just to wait until all of these rules and tables are compiled in one book, and if you are happy with the gangs as they are or want something other than the Orlock dudebros then there's no harm in waiting for the next release.

Spencer Taylor posted on 4/9/2018 11:27 AM
I dig the Orlock models, but I'm irked they don't come with all the weapon options the can take. It clearly says they can take a heavy stubber, but the box doesn't include one?

Guess it's another way for GW to get people to buy multiple different kits to build the one dude they actually want to run.

Although i bet the Orlock guys would look great in something like This Is Not A Test.