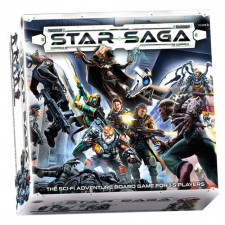 Mantic has had an interesting trajectory. Ignoring their successful miniature game lines for a moment, they kicked off their board game legacy with the modest Dwarf King's Hold back in 2011. This lead to the enormous Kickstarter effort of the more fully realized Dungeon Saga, which in turn birthed Star Saga, a sci-fi dungeon crawl in the spirit of Space Hulk and Imperial Assault.

The initial impression is that Star Saga is a difficult sell. These miniatures-based dudes in a corridor games are more prevalent than Facebook hot takes on The Last Jedi. To claim interest and remain in the discussion for more than a moment you need to do something special. Offer a new angle, clever mechanism, or really blow us away with presentation. Someone who sleeps with their Walking Dead: All Out War miniatures in their bed shouldn't really be in a position to doubt Mantic's competency, but I found myself a little skeptical. 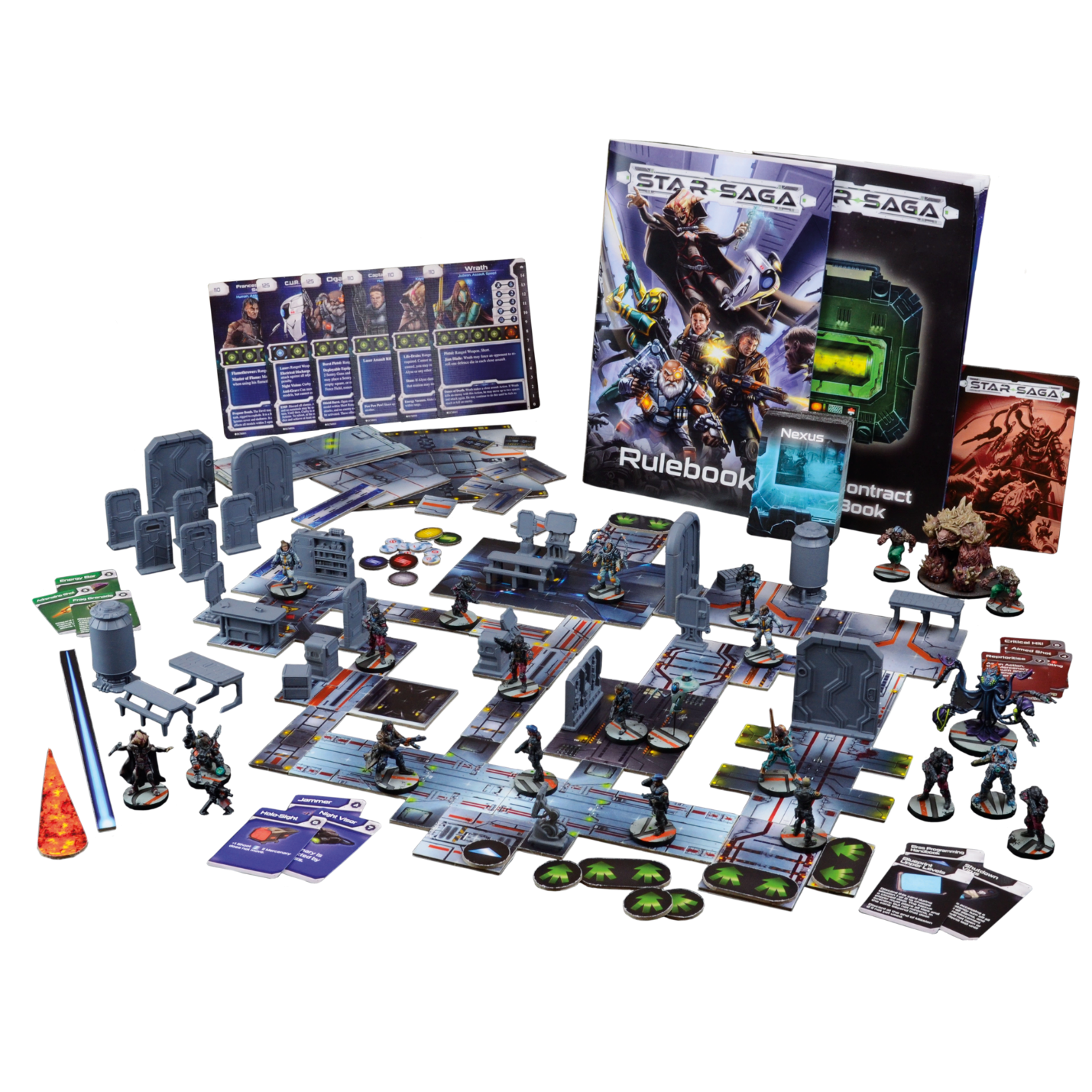 Pretty 3D terrain is the crack of miniature gaming.

You know what gets my loins in a jitter? Little plastic pieces of furniture. I think the glorious Hero Quest wrecked me inside, but providing little tables, shelves, and consoles to interact with is like having your cake and eating it too. Star Saga pulls no punches in this regard as the sleek hallways of the Eiras laboratories are dressed to the nines with these fantastic miniatures. Better yet, they're not simply eye candy as they provide cover and are even destructible. Most scenarios even have you hacking into the electronic terminals to unlock doors or gain information. The integration is slick as the design itself feels focused and well integrated.

It's also difficult not to fall in love with the setting. Players choose characters from a group of wily mercs that come across as the Dirty Dozen of the Warpath setting. We have a ninja Alien that wields a huge blade, a techno-Dwarf with a menacing gaze, and even a floating robot protected by an energy shield. You also have dudes with assault rifles boasting that thousand yard stare perfected by Granddaddy Clint. Oh and the weapons, the glorious weapons. Want to burn some infected security guards with a flamethrower? How about tossing down some auto-turrets to lock down a blood-soaked corridor? Let 'er rip pumpkin.

The style and narrative beats of this group give off this Alien Resurrection vibe. Yes, that was a film that's not fit for audio-visual sensory torture, but the concept of a mercenary group fighting off security teams and mindless beasts while trying to uncover secret information is infectious like a fever dream. It's a needed change of pace from the typical ranked military focus of sci-fi corridor shooters. With nary a Space Marine in sight, it's refreshing like an ice-cold stout.

Play is of course scenario based with a group of interesting and diverse missions taking you through a scripted story of sorts. You will uncover the terrifying secrets of the station as you sneak about in the shadows and blow holes in the defenses. Surprises come fast and quick and it’s easy to become invested.

Fortunately the ruleset, like Dungeon Saga, is straightforward and simple. You activate a hero to move and perform a single action such as shooting or hacking into a computer. The Nexus player controls the obstacles that will stand in your way, obstacles wielding pulse rifles and rows of fanged teeth. The opposition's play is card based and feels slightly akin to the excellent system found in TMNT: Shadows of the Past. By utilizing cards, you afford a level of drama and tension that heightens the overall atmosphere.

What are most appreciated are the few areas where Star Saga decides to add a touch of detail. Embellishments such as allowing figures to pop in and out of cover on their turn really add a touch of character to play. The wonderful darkness rules where characters must feel along walls to avoid moving blindly forward are fantastic - and handled with only a couple of paragraphs of text. These moments define the system by bolstering personality and injecting color into an otherwise direct and nondescript ruleset. Nailing that balance of tantalizing detail yet overriding simplicity in structure is a difficult challenge, a challenge Star Saga has met head on.

The remainder of the product is all very solid. Physically everything is attractive and the detail on the miniatures is excellent. The scenarios are engaging and dole out the narrative in chunks through stages of progress. There's a strong exploratory feel as you gain information from hacking terminals and slicing code; that sense of adventure is captured and everything comes together well. 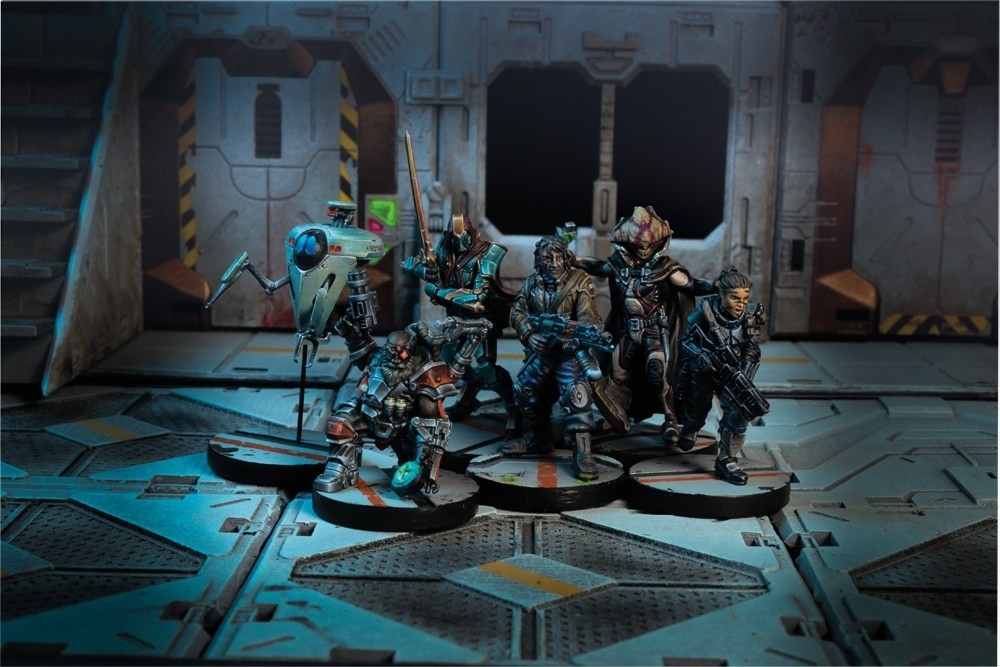 Winona Ryder and Ron Perlman eat your hearts out.

One tempting aspect of this release is the promise of solo play. While the automated Nexus system appears to be carefully constructed, it remains a somewhat fragile system that puts some heavy lifting on the players. At times it will hum along but at others you will be forced to make crucial decisions without perfect guidance and this can mar the experience for those seeking an air-tight process.

This is a small point critically as slipping into the role of the Nexus player is very satisfying. The decision points are interesting and the scenario arc possesses a strong payoff that proves a joy to run your players through. While I wouldn't wholeheartedly recommend this game for the solo player, if you can handle the one versus all structure common to the genre then you will find a lovingly crafted design full of tension and wonderful story beats.

And that’s really where Star Saga comes in. This game hits its target square in the jaw with no fluff or lip-service. Its effort is focused around sharply honed stories and presenting the players with intense and engaging situations that will stick in your belly long after the box has been shelved.