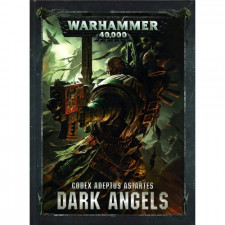 The Dark Imperium of the 41st Millennium just got a little more exciting, as the Dark Angels Codex has arrived. Like the codices that arrived before, it the Dark Angels Codex provides quite a few new options, special stratagems, and relics for the 1st Legion [LIBRARIAN’S NOTE: THE 1ST LEGION IS THE MOST LOYAL LEGION]. In addition to gameplay rules, the Codex also provides piles of fluff and art to explain the chapter’s rich backstory and also provide some small hints to its future.

I jumped into 40k with the Dark Imperium starter set, and after reading as much lore as I could get my hands on it was the Dark Angels that excited me the most - as far as Space Marines go. They’re an original chapter noted for their determined and single-minded focus, yet they remain shrouded in secrecy. Following the pattern set by previous releases, the book opens with the history of the [LIB: DEFINITELY LOYAL] chapter including a really nice timeline of events. As a new recruit to the faction, I appreciate the depth and detail that GW goes into in these codices. To be sure, most players are going to go straight to the rules at the end of the book, but I enjoyed spending a couple nights jumping into the lore. 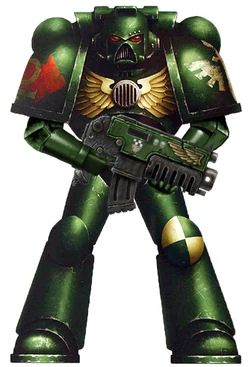 The Dark Angels are steeped in tradition, and differ in a few ways from the standard Space Marine chapter organization that was previously detailed in Codex: Adeptus Astartes and the Index. Many Dark Angels players were curious how the chapter was going to adopt the new Primaris Marines at the center of the 8th Edition launch. In keeping with the mystery of the Dark Angels, we’re given a taste of this information while the future is left dark. We can certainly field Primaris in the chapter, and according to the fluff these marines are performing admirably on the battlefield. However, [LIB: THE FOLLOWING 3 PARAGRAPHS HAVE BEEN REDACTED]

Once you move past the lore and the pages of painted miniatures that inspirational and ego-crushing in equal measure, you get into the meat and potatoes of the codex: the rules. While the fluff is excellent and fun to read, I bought this book to learn how my Dark Angels were going to stand out from the smurf-y Ultramarines and figure out how many vehicles I was going to want to buy to build out a Ravenguard Wing (the answer is: “I’m glad the holidays just passed and I have some cash”). 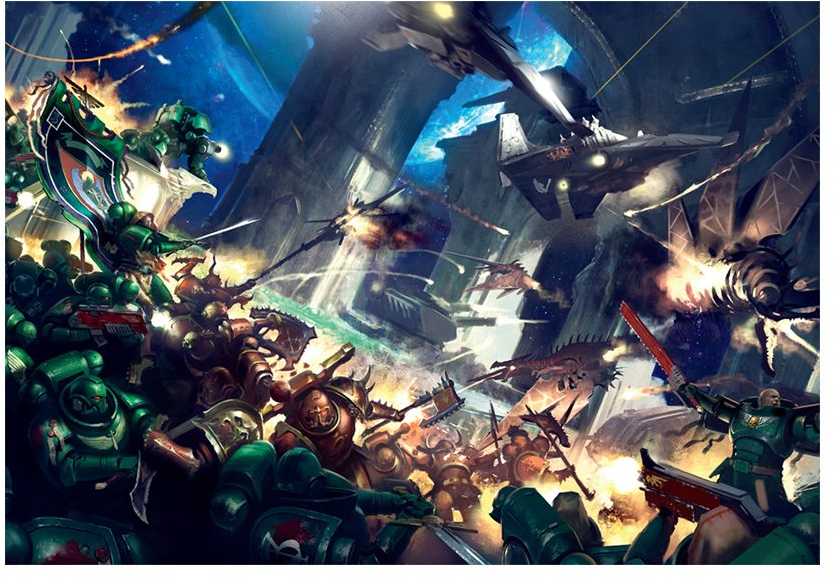 This part of the book is also mostly good for Dark Angels players. A few stratagems are the same as the standard Space Marines, but the large majority give the Dark Angels a unique role on the battlefield. Plasma Weapons look to be particularly lethal in the hands of the 1st Legion. Not only are there strategems to lean on to make your weapons either more deadly or more reliable, but there are plenty of re-rolls in this book to keep your troops from blowing themselves up [LIB: IN LOYAL SERVICE TO THE EMPEROR]. Individually, I love a lot of this book. 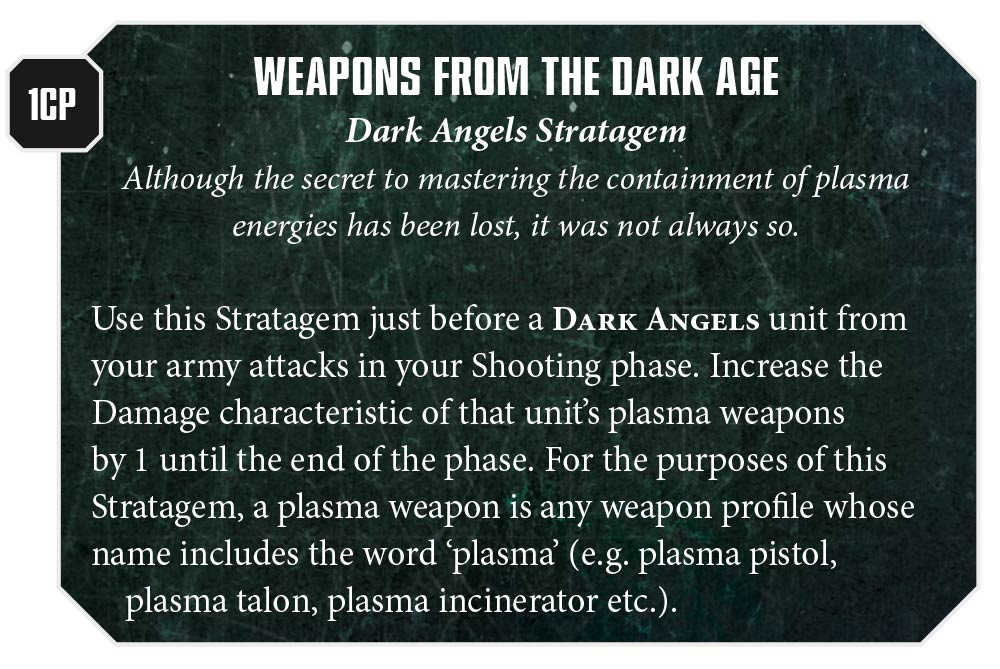 Unfortunately, I am a little disappointed that some of the rules and units don’t synergize. The fluff is full of stories of the Ravenwing zooming into battle and calling in the Deathwing Terminators via homing beacons, yet there is nothing in the rules that reflect this. 8th Edition streamlined many things but unfortunately this means giving up some of those fluff-reflecting rules that I enjoy in any game. Similarly, the Dark Angels gain an army-wide ability to boost units who stay still and don’t move; an ability that a Ravenwing heavy player will rarely take advantage of.

These, however, are minor quibbles. Dark Angels players are getting a strong boost with this codex and I love hearing that the Primaris Units have acquit themselves well on the battlefield. With the hint at the end of the codex that [LIB: NOTHING HERE] and an announcement from GW that there are more Primarchs coming, anyone considering the Dark Angels should take a good look at this release.