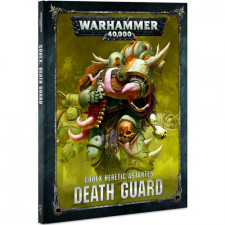 Codex Heretic Astartes: Death Guard is the Warhammer 40k book I’ve been looking forward to the most in this young 8th edition, and after the high standard set by the Adeptus Astartes codex, it certainly does not disappoint. The Death Guard Codex slots right in alongside the other great, recent Codices (and Battletomes). It offers up a must-have gaming resource for players of this army and plenty of expectedly high quality fluff and artwork for those simply interested in the, um, fecund lore of Nurgle’s special brand of Chaos Space Marine. 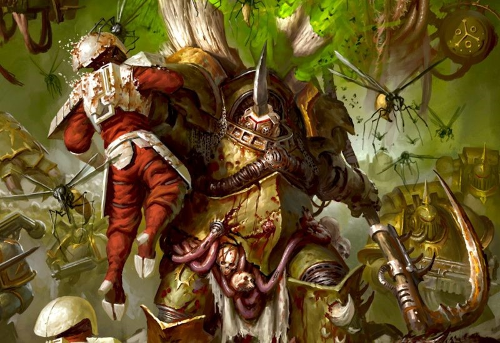 This is a smaller book than the Space Marine Codex, but like the Grey Knights book that released immediately before this volume, it is also a more faction-focused offering detailing an army with fewer choices overall. Like the Space Marine book, it offers game content for both old and new models (including some obnoxiously long-in-the-tooth units such as the tired and lame Chaos Defiler) but the ratio here is much higher in favor of recent and soon-to-be-released models. Indeed, looking at some of the upcoming units such as the Myphtic Blighthauler, the magnificent Plagueburst Crawler tank, and the Tallyman has me salivating and grinning in an unsavory fashion- perhaps I should be checking my skin for signs of Nurgle’s blessings? Choice daemons are also included in the listings, making this an all-inclusive affair.

All of this is obviously an expansion from what was on offer in the 8th edition index covering Chaos Space Marines in a perfunctory way, and it is again more focused on Death Guard unlike the Chaos codex. So that means if you are playing the Tainted Sons, the Putrid Choir, the Glooming Lords, or any subfaction of Death Guard you simply must get your hands on this book.

The lore sections provide plenty of that awesome GW fluff (including a few Battlefleet Gothic-ish nuggets) that makes you feel like you are reading a bona fide history and you’ll get into the entire history of the Death Guard going back to the Heresy. Campaign maps, chronologies and legion organizations are on display as are full-page descriptions of each unit. And of course, there are ample photos of disgustingly well-painted miniatures to make you feel inferior, untalented and unskilled as a hobby painter.

The diseased meat is of course the game data, which includes wargear lists and full stats for every Death Guard-compatible unit. I was especially pleased to see expanded options for Plague Marines and the stats for legacy models are always appreciated. Battle-forged Death Guard armies gain a couple of great abilities- Inexorable Advance removes the penalty for moving and shooting Heavy or Assault weapons and doubles the rate of fire for Rapid Fire weapons. Plague Host allows Death Guard models to claim an objective without having the most models near it- quite a powerful ability in an army that may be focused on expensive units rather than weight of numbers. 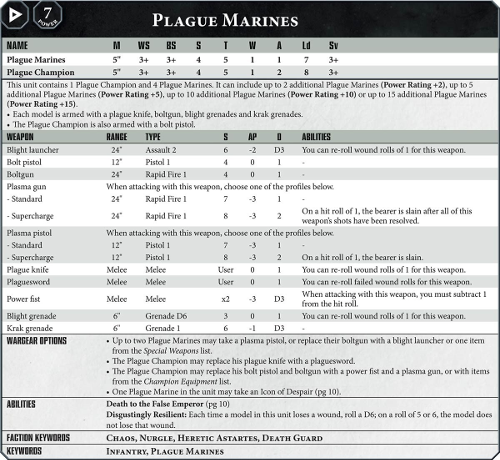 This is really what you need from the Codex- lots of numbers.

Warlord Traits provide your Death Guard characters with some assorted Nurgle fun, possibly the best being Revoltingly Resilient- this makes your Disgustingly Resilient wound cancel go off on a 5+ rather than a 6+. This is a much more potent ability than you might think. A host of specific Stratagems give you some interesting situational options to spend Command Points on. I’m particularly fond of Poxwalkers, so I’ve been abusing The Dead Walk Again, which adds a model to a Poxwalker unit any time any unit dies within 7” of it. There are a few Relics of Decay, powerful artifacts that you can bestow on a character, and of course the Psyker section that serves up six (not seven?) different psychic powers. Well, OK, if you include Smite it’s seven. Rounding out the game content are the matched play point values and a few Tactical Objectives that carry on with the Nurgle theme.

All things considered, Death Guard is a fun army to play if you prefer a more measured approach and hard-hitting, tough units with a mix of ranged and melee options. They are a great choice for those looking for a zombie-like army, gas mask aficionados, tentacle enthusiasts and epidemiologists. Previously, I had never been all that interested in Nurgle (I’m a Tzeentch man), but the new range of models drew me in and the excellent storyline behind their founding and characters drew me in. The Death Guard Codex is a great way to check out this awesome 40k faction but if you are already a disease vector for the Plague God, then you simply can’t miss this excellent book.