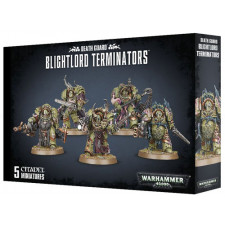 When you think of Death Guard, you think of lumbering, slow hulks of disease and pestilence grinding across the battlefield. And no unit better exemplifies the trademark inexorable advance than a group of Nurgled-up Terminators. The new Blightlord Terminators kit brings us five very expensive (in dollars and points) models in the classic Cataphractii armor and equipped with an assortment of combi-weapons, plague-infested swords and axes, a few heavy weapon choices, and a wicked Flail of Corruption.

The models are good, but other than one beetle-like dude they are unsurprising if you are already deep in Death Guard plastic. The Deathshroud Terminator kit that immediately preceded this set was pretty much the shape of things to come. This kit has more flexibility in terms of weapon choice, but it does chap the hide somewhat that it doesn't quite come with enough of anything. For example, you can replace any model's stock Combi-bolter with a Combi-melta, Combi-plasma, or Combi-flamer. I wanted to make my squad an upfront anti-armor assault team with meltas. No can do. You get ONE Melta. I'm sure the power gamers out there, reveling in 8th's favorable treatment of Plasma, were thinking they'd run all Plasma. Well, they are going to have to buy multiple kits or go to the bits resellers. Likewise, there aren't enough Bubotic Axes or Baleful Swords to go around if you want all of one kind of cutlery. 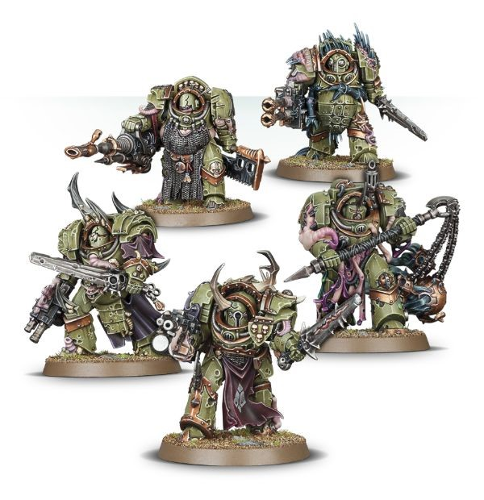 Seriously, that beetle guy is the star of the show here.

So I'm sort of put off by the lack of complete sets of weapons, but as this is a $60 retail kit, more would have added another sprue and likely another $15 on the MSRP. I'm satisfied with my build overall, with one Melta and two plain Combi-Bolters, a guy with that savage flail (leftover wounds carry over to other models in a unit), and the Blight Launcher for my heavy weapon choice. I went Blight because of its 24" range and Assault 2, not to mention that it has -2 AP and it's a Plague Weapon allowing rerolls of 1 on the wound roll. But you can also go with a Plague Spewer (essentially a flamer) or a Reaper Autocannon if you want something with more range. All three are solid choices; it just depends on what tactical role you want to pursue with your Blightlords.

With the classic Teleport Strike, Blightlords are a great deepstrike option and with their Aura of Rust (rolls of 6+ on the wound increase AP) make them ideal for surgically removing nuisances like artillery or or troublesome dug-in units. There is some built-in versatility, making them good for melee and shooting engagements alike. Your weapon choices will sort of tune these guys toward a specialization.

This is a solid, almost essential kit of signature Death Guard units lacking only in options. If I felt that this box were more accommodating of its own rules-proscribed choices this would easily be a four star product. Unfortunately, I think most Death Guard players will come away disappointed that the full range of weapon selections aren't available to them with a single kit.