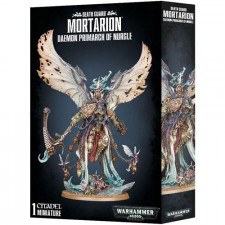 Let’s be clear about something. There is nothing “miniature” about Mortarion, the latest in the Death Guard line that Games Workshop has started to churn out in pestilential concert with the release of the new codex. This thing, when assembled, is huge. From wingtip to base he’s around 8 ½ inches with an almost 11 inch wing span. But more than that, Mortarion is simply a tremendous model, one of the very best hobby gaming miniatures available on the market today. It is an exquisitely sculpted, supremely detailed figure that represents the very best of Citadel’s current, over-the-top baroque style and it tops even the wonderful Alarielle and Lord of Change miniatures from last year. It is a model full of character, narrative, movement and thanks to the Nurglings and gas-masked cherubs carrying their master’s censers, just a touch of classic GW whimsy. 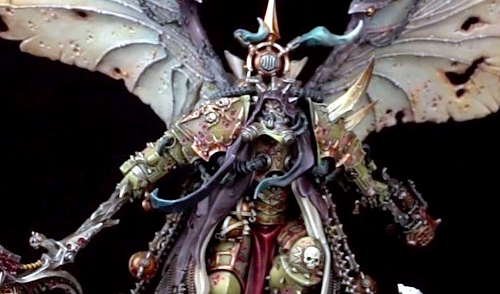 Can you spot the heretic?

There’s no doubt, this is an intimidating model. It’s very expensive and it comes in a slipcase box with interior artwork so you know it is deluxe. The obnoxiously great ‘Eavy Metal studio paintjobs on the box (along with a paint guide indicating no less than 27 Citadel colors required) may scare away some if the price tag doesn’t. It looks complex and difficult to put together. But here’s the real story. I spent about 90 minutes assembling Mortarion and I have to say that I don’t think I’ve ever had an easier time assembling such a large, detailed figure. The way the pieces are cut results in seamless fits and there are plenty of guide nubs and grooves to help make sure you line everything up correctly. The casting is almost perfect, and I didn’t even have to use a file a single time. There was a little difficulty with one of the wings staying put (of course) and some weirdness where I missed one of the chains dangling from his robes and that caused some grief, but by and large this model is just about as effortless as it comes.

As for painting- well, we have a tight turnaround here at The Review Corner and I’ve not yet begun to put brush to plastic. With that said, this does appear to be a challenging model to paint if you are looking for something above tabletop levels of quality. Highly skilled or experienced painters will likely relish the complex array of effects, textures, and minutiae abound in this kit. This is a centerpiece model for any Death Guard or Nurgle collector and I wouldn’t be surprised to see those who have nary a Plaguebearer nor a Poxwalker who are primarily interested in modelling and painting to take up the Mortarion challenge.

But my Mortarion will have the good ol’ tabletop level of finish probably with a couple of screw-ups that will keep me awake at night and some cruddy drybrushing in spots where you really ought to be layering. I love model-building and painting, but I am primarily a player so our Daemon Primarch has to bring something to the table to warrant the price tag and effort required to put him there. The good news is that Mortarion is a total bad ass.

Granted, he is a 470 point bad ass (24 if you are playing with the more casual power points). But that whopping expenditure buys you a Lord of War-class, 18 wound figure with 2+ WS/BS and 7 toughness on his statline. He brings with him his signature weapons, The Lantern (the pistol) and Silence (the giant chain-scythe). Not enough for you? He can also throw Phosphex Bombs, a 2D6 grenade attack with 5 strength, - 5 AP. Still not enough? Then the Nurgling attendants can also attack with their plague-infested claws and teeth. And he’s a Psyker to boot! 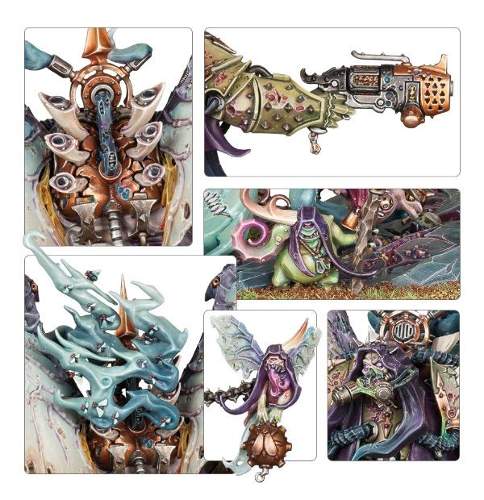 Mortarion will take more than an hour to paint.

Even more powerful- and fun- are Mortarion’s powerful, terrifying abilities. There’s a hit roll reroll aura and his Barbaran Plate armor gives him a 4++ invulnerable save. But my favorites are the ones that speak to the core themes of sickness, plague and disease that characterize a Nurgle army and of course their Primarch. Toxic Presence reduces the toughness of enemy units by 1 if they are within 7”- which, of course, makes them easier to wound and kill. Host of Plagues also affects enemies within 7”, but it just plain old causes mortal wounds at the beginning of the fight phase. And if your enemies manage to bring Mortarion down, he can actually explode all over everything in that same 7” bubble. Yes, that’s right, always 7”. That’s another Nurgle thing.

Needless to say, Mortarion is a weapon of mass destruction. Granted, that also makes him the biggest bullseye on the board. There are Deathshroud Terminators tasked specifically with bodyguarding the Primarch, but still- expect every gun on the board to be pointed at your big, expensive model. Regardless of his actual longevity, Mortarion is a must-have for any Death Guard player who can afford the kit and that has the wherewithal to put the kit together and paint it. Mortarion is a masterpiece, one of the best models Games Workshop has ever produced.