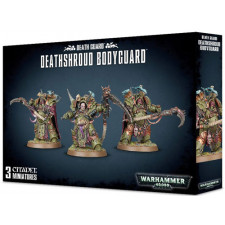 So you've got Mortarion, the Citadel masterpiece that I awarded a full five stars, on the table. You've spent hours assembling him and getting the Daemon Primarch of Nurgle ready to lead the Death Guard to putrescent victory- and then a horde of conscripts KOs him on round 2. The solution to this problem is the new Deathshroud Bodyguard kit, a unit of three scythe-wielding dudes in cumbersome Cataphractii armor who stand by ready to take a bolter shell or a lasgun blast in lieu of your Death Guard characters. 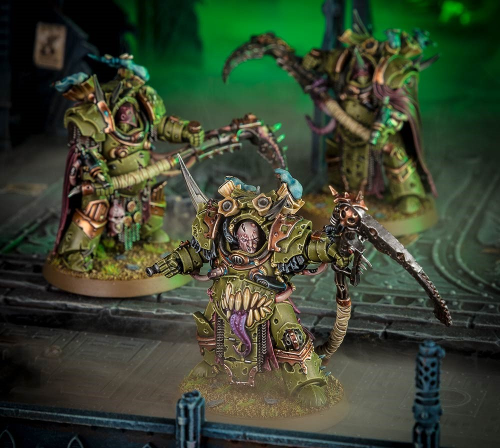 We've come for your wheat.

Strategically speaking, the Deathshroud Bodyguard are valuable in an army that is character-heavy like Death Guard, and they serve a similar function to units such as the Tyranids' Tyrant Guard or the Imperium's Nork Deddog. If one of these models is within 3" of a character, on a 2+ roll can take the hit intended for them. With a toughness of 5 and the classic Disgustingly Resilient ability, they have some survivability but let's face it, these guys are intended to be bullet shields.

They also give characters (but not, notably Mortarion) a special melee buff, granting an extra attack in the fight phase. This is cool, and when it gets up close and personal having that extra attack on a horde of Poxwalkers for example can be positively brutal. Topping off their abilities is the traditional Teleport Strike characteristic of the typically slow-moving Terminator class units. This lets them plop down wherever you need them the most.

There aren't any options for loadout here- they have a Plaguespurt Gauntlet (essentially a short-range, pistol-class flamer) and Manreaper scythes with the Plague Weapon keyword. The one-out-of-every-three Champion model can take a second Gauntlet, which is generally a good idea- especially because as pistols, they can also be fired in melee. You are looking at 150 points for a group of three Deathshrouds, 11 points on the Power Points scale.

This is definitely a more specialized unit that isn't particularly suitable to new Death Guard players or those who aren't fielding many characters. This is definitely a unit to bring if you are bringing something like Mortarion or Typhus out, where spending the points to give these prime targets some bubble-wrap protection. Aside from their very situational character-buffing abilities, the Deathshroud Bodyguard aren't nearly as useful or recommendable over other options at the same or similar point values.

From the hobby perspective, the kit is very static in general, and it is pretty much WYSIWYG versus what is one the box photos apart from a couple of head choices and the option (which I don't think is really a "choice" per se) to make one model a Champion. I also have to state that out of all of the 8th edition release that I have covered across the Primaris and Death Guard ranges, this kit is by far my least favorite. Sure, all of the usual CAD-enabled modeling is there so you get all of the grody bits and bobs that give Death Guard its toxic flavor. But there is something boring about these figures- they come across like pretty bog-standard Chaos Terminators. I can't help but compare these pieces to some of the wilder, dare I say (with affection) sillier Plague Marines or the Foetid Bloat Drones. They just aren't as creative or visually compelling. There's something uninspired about these models, and the fact that these three pieces are retailing for about the same price as a ten man Intercessor squad or a Plagueburst Crawler seems somewhat galling.

But there again, function over form means that these could be useful units and even if they aren't game-winners, they can add much to a fluffy, narrative game. It is very cool to put Mortarion and his retinue into the battle, and it is of course fun to watch your opponent roll their eyes as they take hits intended to knock out a vital character. They are not critical units needed to make a battle-forged army, I don't think that you'll see them on high-level competitive lists, and there are definitely better ways to increase your Death Guard numbers. Regard the Deathshroud Bodyguard as "nice to have" rather than "must have" units.