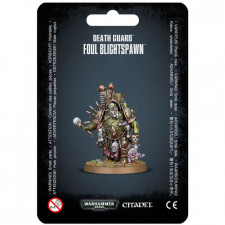 Critical Misses- Not quite essential to a Death Guard army; somewhat flakey in terms of effectiveness

According to the fluff, the Death Guard's Foul Blightspawn are Plague Marines that matriculate up into a position where they are a sort of disease brewer. So they leave their Vectoriums to go the Plague Planet and have all kinds of machinery implanted into their bodies, including a big old keg on their back hooked up to a pump and a sprayer. And apparently, they really stink.

That stench gives them a very Nurgle-y 7" aura within which models that have charged to join the fight are overcome by the smell and lose their opportunity to fight first. This makes the Blightspawn an effect counter-charge unit, and in fact it could be said that it is this unit's primary function. But look down on the base- there's also a little Nurgling buddy. That grenade he's holding is an Unholy Death's Head. This is a super powerful grenade (2D6 instead of the usual D6) that either the Blightspawn can use or the Nurgling takes it no further than 3" away to another unit to throw. It's hardly a game-changer, but in a pinch a big boom like that is always appreciated.

This is an interesting Elite choice, it isn't necessarily important and sometimes it's not particularly useful, but it is a good example of how the fluff can make a unit fun enough to bring along. I really like that he's got this big tank of disease juice and basically an Assault D6 hose that he can spray it with. He's pretty effective at close range (randomly determined 2D6 strength means it can seriously damage anything) and with -3 AP and 3 damage- provided you can get him close enough to start cranking it out in earnest. 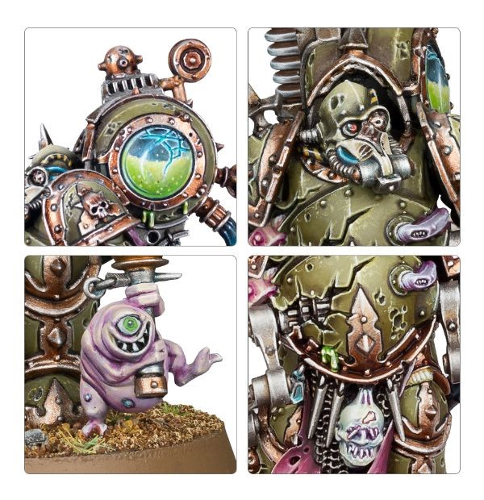 The only thing making me sick is the paint job here. I mean, come on.

The 5" move and the fact that he doesn't have the Teleport Strike that his Cataphractii-clad compatriots feature is a pretty serious weakness. However, this is also an easily underestimated unit that some players may overlook in favor of higher profile, more apparently dangerous targets. If you've room in a Rhino or Land Raider, he's a good addition to a strike force headed for an objective or to interdict a threat. But be aware, he's not getting anywhere soon on his own and if your opponent is hip to his often surprising damage output- this is a unit that can dish out a 12 strength attack.. But then again, you might be shocked when at a critical moment, your Blightspawn squirts out a 2 strength attack against the target that in the next wipes him off the table. I like crazy things like this- I'm also a Skaven player if that tells you anything.

As for the model, it's a cool piece and the big disease tank and pump mechanism looks great. Painted up, this figure will stand out in a Death Guard army. I like unique weapons in my armies- to the point where I will choose a "suboptimal" unique weapon over something I already have five of on my troops. So I especially like that the Blightspawn isn't wielding a same-old Bolter or Plasma gun.

I went from wondering "do I really need this unit" to really liking it. It's an Elite choice, 4 power points, and I find that it usually turns up in the lists I make. It's a fun unit, especially good at generating the occasional laugh or swear word.