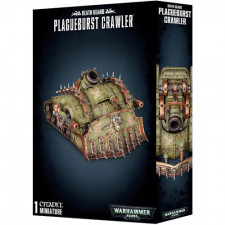 Critical Misses: No customization options, may not be essential to players with an existing Chaos motorpool

The Plagueburst Crawler is the newest tank to roll off the Citadel assembly line and this 2017 Death Guard daemon engine is said in the fluff to be constructed specifically at Mortarion's behest. In terms of visual design, Mortarion really knows his stuff, it seems. This is a very studied piece of plagued machinery that reflects on classic Warhammer 40k designs- meaning that it bridges the gaps between World War I and World War II armor and the tanks of the far-fetched future. This thing looks like it could have been fielded in 1914 or 1941 in an alternate universe, or sometime of course in the 41st millenium. 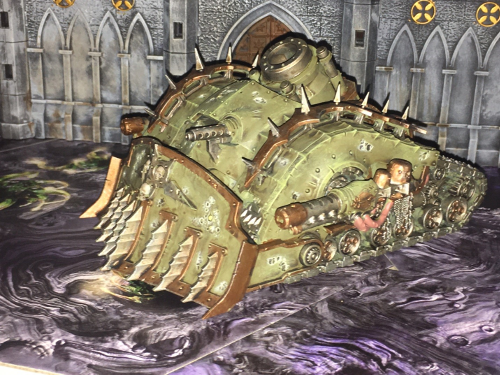 The author's own Plagueburst Crawler. It looks much better in person, honest!

This sense of timelessness is what makes Warhammer tank designs so cool, and it's why Rhinos, Predators and Land Raiders have remained more or less evergreen for decades. I appreciate that the Plagueburst Crawler slots right into that lineage while also bringing with it the aesthetic of the newly updated Death Guard army. It's a sick piece, in both senses of the word.

Now, as is the case with many recent Citadel designs, this kit is very much like a modern Lego set. This means that it's great for building what's on the box, but not so great as far as options or variants go. There's a cost for the really cool stock design, and that price is the kinds of customization and flexibility that even the humble Rhino model has always featured. You build this like it is on the box, unless you want to do some serious hobby knifing and green stuffing. I do not care to do so.

Out of the box, this thing comes packing a wicked mortar with a 12" to 48" firing bracket. You get D6 Heavy shots with it and it hits harder than the typical mortar with a S8/AP-2/D3 damage profile. Like most artillery pieces, it can hit units that it can't see. In addition to the lobber, you also get a hull-mounted Heavy Slugger or Rothail volley gun and a choice between two Plaguespitters (Nurgley flamethrowers) or a harder hitting set of Entropy Cannons that pierce armor at -4 for D6 damage. As a great sage once said- oucheewawa. 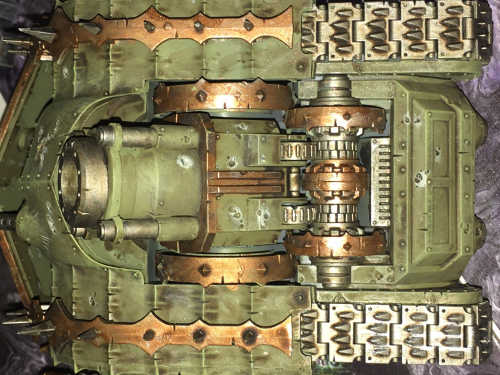 It really grinds my gears when I miss a spot in an all over wash.

I've found the Plagueburst Crawler to be quite versatile. It works as either backfield artillery with some reasonable defenses against deep strikers (especially with the Plaguespitters) or as a main battle tank, lumbering into the midfield with good range and some solidly hateful secondary weapons that can hold their own against the best Imperial motorpool. It's reasonably priced (base is only 100 points) and it feels right in any fluff army supporting Plague Marines or Poxwalkers. I'm not sure just yet if it has what it takes to displace long-standing Chaos tank favorites- Land Raiders and Predators specifically- but I'd really rather field one of these than a tired old Defiler in terms of a heavy support option.

I'm very happy with the Plagueburst Crawler and I've acquired a second one because I wanted to have one of each in terms of the weapons options. It's a pretty fun kit to assemble despite the lack of options, and painting it is simple and enjoyable. Death Guard Green spray, Balthasar Gold, and Agrax Earthshade will get almost 3/4 of the way home. Overall, another great post 8th-edition release.