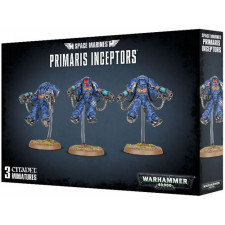 With the release of the new three-man Inceptor Squad, the introductory Primaris Space Marines barrage has come to its conclusion. Like with a couple of the previous squad boxes, this set is the "full kit" version of units from the Dark Imperium starter set with a few more options. Inceptors are a fast attack option with a killer 10" base move, the ability to set up in low orbit and deep strike at any point in the battle, and they pretty much just shove enemies to the side as they rocket around the battlefield with their jump packs and what look like foot-mounted helicopter skids. They look bulky in their Gravis armor, but these guys also have the Fly keyword.

Meteoric Descent and Crushing Charge are definitely cool, narrative abilities and these guys bring some considerable firepower as well. The stock weapon option is a pair of Assault Bolters (R18", S5/AP-1/D1), spitting out D3 Assault shots. This is a very respectable build out of the box and it is worth noting that the Assault Bolters look different than those in Dark Imperium- these have a cool and probably not really very functional metal frame and grip around their blast shields. The alternate build puts Plasma Exterminators in their hot little hands, which gives them a less predictable rate of fire (Assault D3), but at S7 and with -3AP. And you get the option to Supercharge, which of course means that you will curse yourself to roll a one and lose the Inceptor without fail. These dudes don't bring the usual Frag and Krak grenades, and even though they have a WS of 2 they do not carry melee weapons.

I chose the Plasma Exterminators for my squad because I already had the Bolter option from Dark Imperium. I felt like the models looked a little cooler with their big power cables hooked behind their backpacks. I also liked the notion of having a harder-hitting weapon on them, making them a feasible option to hit a backline vehicle or other high armor unit that might be causing grief. I feel like the choices here are pretty well balanced between volume of fire and impact of fire, but I suspect the Plasma Exterminators will be widely regarded as the better option.

The models are good, and I especially like that there are head options with the previously unseen high orbit shield or whatever it is pulled down over their helmets. It's a really cool look, and I kind of wish that the Dark Imperium models had these visors too. I have to say that I did not particularly care for building these figures though because they seem somewhat overcomplicated for what are essentially single pose pieces. They look neat on their flight stands and of course the detail is great, but there is simply not a lot you can do with these in terms of customization. I' m fine with that, as modding isn't really my bag, but those who want the more bespoke figures will have their work cut out in trying to do something different with the kit.

The Inceptor Squad is fresh and interesting, and has plenty to offer in terms of battlefield effectiveness. They look distinctive and if you drop them at the right moment, they can certainly provide the battle shock you'd expect from HALO-jumping Primaris marines. I'm not so sure that those looking to move on from Dark Imperium should rush out to buy these over the Reiver kit or another set of Intercessors, but they are definitely a solid unit worth consideration.